Dramatic irony in Of Mice and Men

The major irony in Of Mice and Men is that George kills Lennie because of their friendship. George kills Lennie to spare him from a worse death. George complained about Lennie and his defects, but realizes his importance only after his death. Once Lennie is dead, George loses the weight of responsibility Lennie caused him, but he is also lonely. Also, Lennie and George’s dream to own their own farm that is carried out throughout the novel dissapears with Lennie’s death.

Don't use plagiarized sources.
Get Your Custom Essay on Dramatic irony in Of Mice and Men Just from $13,9/Page

George and Lennie dream of owning a little farm of ten acres with a windmill, a little shack, an orchard and many animals. The dream keeps them going and makes their work easier but also solidifies their friendship. The dream that leads them on will die with Lennie’s death. The dream of Lennie and George is one of the types of American Dream popular in American fiction. Their dream is that of wealth and land, the desire for a home, and to work their own land.

For Lennie in particular it is to have responsibility for once, to look after the rabbits, and to finally have a sense of self worth. Yet the irony in Of Mice and Men is that the dream seems a mirage, it will not be achieved. George and Lennie try to deny their social class and role in the world, but the outcome will prove this dream to be unreachable. George and Lennie only own their arms and the friendship between them.

Lennie’s retardation causes irony in the novel. Despite the fact that Lennie is fundamentally good, a grown child, he harms those that surround him. This can be seen when he kills the mouse because he stroked it too hard. Yet, the killing of the mouse was caused by his affection for it, and his liking its soft fur. Similarly, he kills the puppy, and eventually Curley’s wife. All these acts occur not due to hatred or the intentional desire to harm, but due to his childish affection, and love for the mouse, the puppy and Curley’s wife. Lennie is simply too slow to realize his own strength and his retardation is the cause of his death. Despite the fact George tried to keep him out of trouble, Lennie eventually puts himself in a situation from which he cannot be saved. All Lennie can do is kill him to avoid him a worse fate.

Ironically, it is also love that causes Lennie’s death. George kills him to save him from linching. And once again, their is irony in George’s situation at the end of the book. Despite the weight Lennie was to his friend, because of to his mental retardation, George is alone and lonely at the end of the novel. Through these feelings he realizes the worth of his friendship with Lennie, that was greater than the problems caused by his retardation but that still caused his death. Loneliness troubles many characters in Of Mice and Men, including Candy, Crooks, Curley’s wife, and Slim. Their desire for human company makes them human and makes George and Lennie unselfish and good in their friendship that is stronger than their social condition.

In Of Mice and Men, the fundamental irony is that no matter how elaborately George and Lennie plan their future, and regardless of how strongly they hope and dream their plan wil not happen. George and Lennie are forced to work the land of others, dreaming for the day they will own their own farm. They work hard to reach their dream, yet the effects of Lennie’s retardation, despite him being good, will cause them not to achieve their dream. George and Lennie’s friendship is what makes them unique, yet did not stop their sad destiny.

Despite the fact that Lennie is a weight for George, George always ends up defending him but cannot do anything to save him in the end and his forced to kill him. He kills him for love and this is another element of irony in Of Mice and Men. But once Lennie is dead, George is lonely and despite his attachement to his dream of owning a farm he has to realize his dream has died with Lennie, because it was their dream, not his own.

Dramatic irony in Of Mice and Men. (2016, Jul 08). Retrieved from https://studymoose.com/dramatic-irony-in-of-mice-and-men-essay 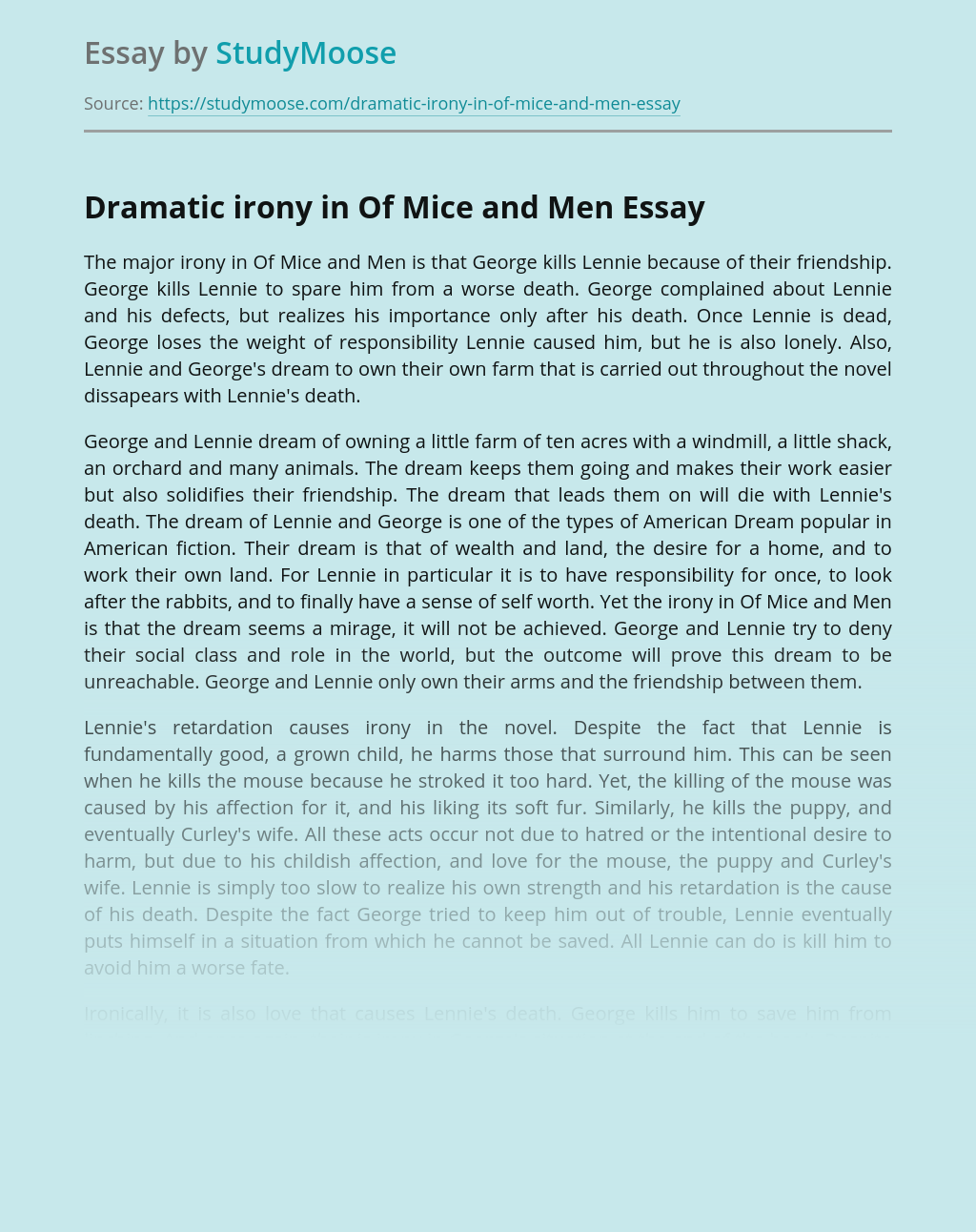 ‘George was wrong to shoot Lennie’ How far do you agree? Support your ideas with details from the novel. ‘Of Mice and Men’ is a novel written by John Steinbeck that was first published in 1937. Steinbeck has a very particular style of writing. He manages to provoke a deep emotion in the reader about...

Prejudice in "Of Mice and Men"

“Prejudices are the chains forged by ignorance to keep men apart.” – Marguerite Gardiner. In society, both modern and in the past, prejudice has been a tool of thinking and labeling a group of race, people, class and culture in order to distinguish ones superiority and dominance from one another, but is simply a way...

Get Essay
Dramatic irony in Of Mice and Men

The major irony in Of Mice and Men is that George kills Lennie because of their friendship. George kills Lennie to spare him from a worse death. George complained about Lennie and his defects, but realizes his importance only after his death. Once Lennie is dead, George loses the weight of responsibility Lennie caused him,...

How does Steinbeck present the character of Crooks in chapter 4?

Chapter 4 of the ‘Of Mice and Men’ novella introduces a character named Crooks. Crooks isn’t shown as a main character of the story, but is given much light in this chapter. Crooks is a black man set on a 1930’s ranch, working as a stable buck. Steinbeck presents the Character of Crooks to us...

Role of Women and Symbolism in of Mice and Men

Crooks is symbolic of dignity in the novel Of Mice and Men by John Steinbeck. Dignity describes the sense of self-respect and self-worth, along with physical and psychological integrity and empowerment. Steinbeck shows Crooks as a symbol for dignity and pride in midst adversity when he draws himself up and will not “accept charity” from...