George and Lennie's Relationship in Of Mice and Men

Of Mice and Men is a novella centred on the disincentives of America during the depression in the 1930’s. The country known as ‘the land of opportunity,’ is dismissed as it became deprived and inept. Many men were itinerant workers that travelled from ranch to ranch looking for wages that would be sufficient till they moved on. These types of men were the loneliest, with no companionship. It is this transient migrant lifestyle which highlights the importance of the relationship between Lennie and George, a rarity among the other characters to be exact.

Don't use plagiarized sources. Get your custom essay on
“ George and Lennie’s Relationship in Of Mice and Men ”
Get custom paper
NEW! smart matching with writer

George and Lennie are an unusual package deal within the novel. From the beginning Steinbeck enforces the idea of a parent –child relationship. He distinctively sets the two apart as they ‘walked in single file’ and ‘one stayed behind the other.’ From first sight, a dynamic in their relationship is established. Although they are outwardly of the same class, George is still the one if front, revealing himself as the leader.

As the story progresses we can acknowledge that George does not deem himself as superior to Lennie, it is simply his duty to control and guide Lennie who is mentally inept and regarded as a ‘crazy bastard’. We can decipher from this that Lennie is in no shape to take care of him and need George to help him.

Their relationship is not of a regular companionship, I regard it as a fraternal bond made over time. Lennie’s nature is almost childlike; Steinbeck describes the character in such a way so that the readers perceive him to be incapable and dependent upon George ‘Lennie, who had been watching imitated George exactly.

’ Children often ‘imitate’ their guardians and some people may even believe this to be the way of development of a person. Lennie may need George to create stability for the future but Lennie’s mimicry isn’t to just fit in with the civilized world. Steinbeck implies from the innocent actions by Lennie, that he genuinely admires George.

Although it seems as though Lennie is dependent on George, this is not the case. I believe that George, a stoic man enjoys the company of Lennie; however a burden he may seem. Steinbeck uses the subtlety of George who only confides in Slim to depict the pride he has of Lennie ‘he’s dumb as hell, but he ain’t crazy.’ George at times creates a softer tone of voice when talking about Lennie. The approval of Slim from George’s compliments ensures the reader that George genuinely likes Lennie. George himself refers to ranch men as being the ‘loneliest guys in the world.’ We can assume that deep down George is afraid of this happening to him, and losing Lennie. No doubt this would’ve have crossed his mind due to Lennie getting in trouble all the time. His fear is turning ‘mean’ by becoming lonely; he is after all comfortable with Lennie, being with him for most his short life.

Together they both hold the aspiration of attaining the ‘American dream’ common to many men at the time to have a piece of their own land. This dream is what fuels both Lennie and George to go on. Lennie is set on ‘tending rabbits’ while George could have more freedom in general. Steinbeck places importance on these two and dream, while we believe they will be successful as the story develops. ‘With us it ain’t like that. We got a future.’ Steinbeck reveals a timeless definition of friendship. Someone who listens and that cares for you. They are reliant upon each other, as even though George conducts the ‘dream’ speech, Lennie has also memorised this dream, maybe in hope it will bring them closer to it.

Their friendship is natural, for George it had always been a promise to care for Lennie, but they simply bonded over time. George even admits this ‘got kinda used to each other after a little while.’ He doesn’t describe it in abstract terms nor does he give any justifications. It is this simple statement that proves the relationship to a natural course. But we can still agree this is remarkable for them to be so close, in such a world where men do not do this.

The tragedy of Lennie dying highlights the importance of the relationship. George who shot him in an act of compassion showed mercy and care. The tension Steinbeck builds in the last chapter, shows how distraught and vulnerable George become and relieving Lennie of torture and pain to come. ‘George shivered and looked at the gun’ as the tough façade of George breaks we see his emotions and his contemplative actions which suggest he had valued the relationship, also springing to mind the fact that their dream is destroyed and will never be achieved. This is really the climax of the relationship where Steinbeck reveals feelings in the relationship.

Steinbeck uses the thoughts and curiosity of other characters such as Slim and the bitter, avenging side of Curley to portray the relationship between Lennie and George. The support George had given Lennie from the time he was in a fight with Curley to when he kills his wife, shows the dynamics and security of the relationship. George would always look out for Lennie, as Lennie would always be protective over George. Their relationship is pivotal and underlines the main theme of friendship in the novel, which led to Steinbeck focusing so much on the friendship of the two men. The readers are aware from the beginning that this relationship is powerful and meaningful although this is not always depicted.

George and Lennie's Relationship in Of Mice and Men. (2017, Feb 08). Retrieved from https://studymoose.com/george-and-lennies-relationship-in-of-mice-and-men-essay 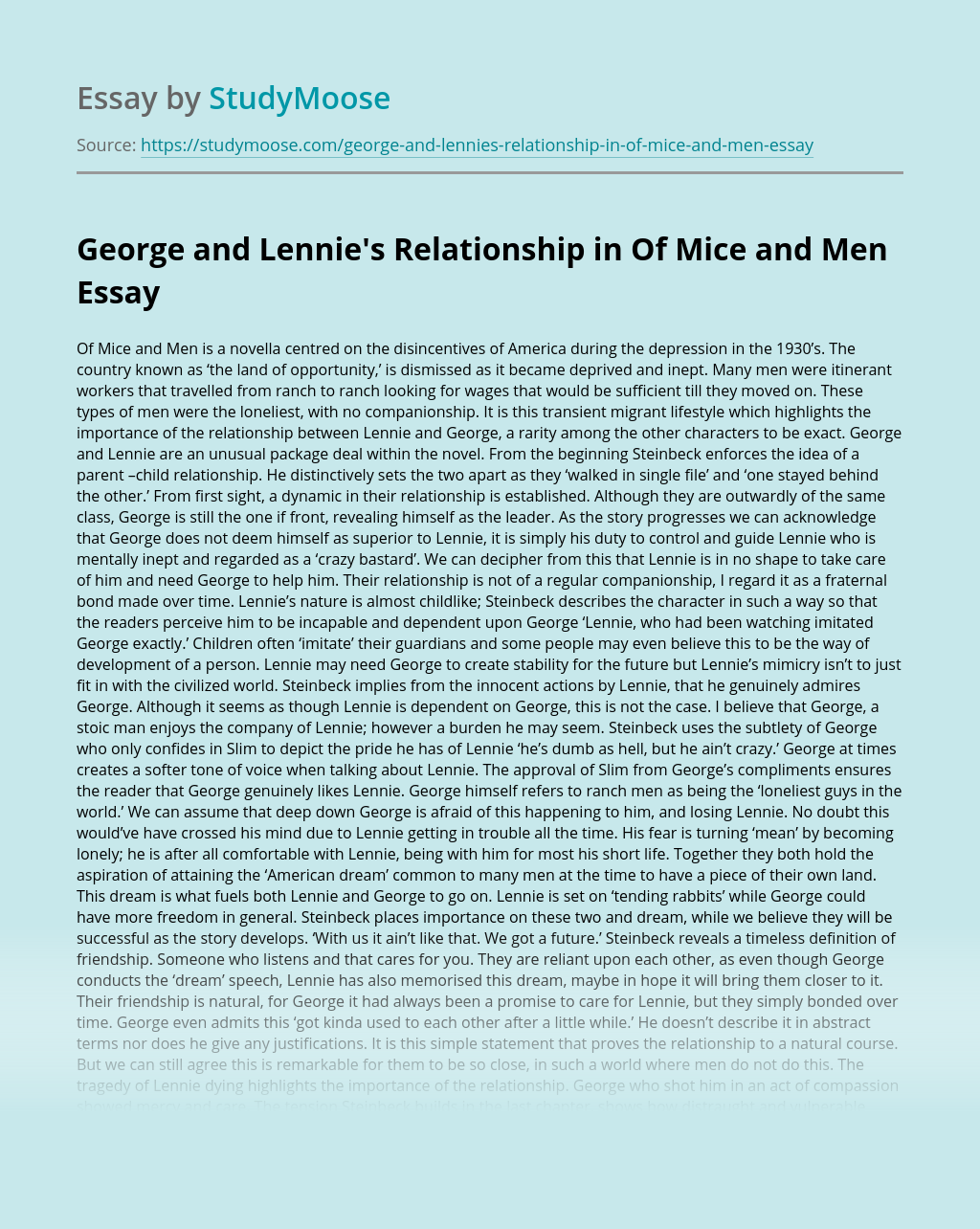