George and Lennie, two extraordinary characters in Of Mice and Men, Similar yet very different. Both Lennie and George rely on their friendship to survive. Lennie depends on his friendship with George to make the correct desisions. George relies on the friendship he has with Lennie in order to plan for the future. While Lennie depends on George, in some ways George depends on Lennie. For example, despite George’s impatience and annoyance with Lennie, and his remarks about how easy his life would be without him, George would lead a much harder life.

Turn in your highest-quality paper
Get a qualified writer to help you with
“ George and Lennie Comparison ”
Get high-quality paper
NEW! AI matching with writer

George always explains to Lennie what is correct and incorrect and makes sure that Lennie behaves. Finally, in order for George to have a future in mind, George needs Lennie.

George and Lenny both shared the same type of hard work, and both of them lacked friendship in their lives. Both George and Lenny want something more in life – they are both dreamers. Their similarities lay below the surface where they appear different.

George is a small, quick man with well-defined features. A migrant ranch worker, George dreamt of one day saving enough money to buy his own place and be his own boss, living off of the land. The hindrance to his objective is his mentally handicapped companion, Lennie, with whom he has traveled and worked since Lennie’s Aunt Clara, whom George knew, died. The majority of George’s energy is devoted to looking after Lennie, whose blunders prevent George from working toward his dream, or even living the life of a normal rancher.

Thus, George’s conflict arises in Lennie, to whom he has the ties of long- time companionship that he so often yearns to break in order to live the life of which he dreams. This tension strains George into demonstrating various emotions, ranging from anger to patience to sadness to pride and to hope.

George’s companion, the source of the novel’s conflict. Lennie, enormous, ungainly, and mentally slow, is George’s polar opposite both mentally and physically. Lennie’s ignorance and innocence and helplessness, his childish actions, such as his desire to pet soft things, contrast his physical bulk, making him likeable to readers. Although devoid of cruel intentions, Lennie’s stupidity and carelessness cause him to unwittingly harm animals and people, which creates trouble for both him and George.

Lennie is tirelessly devoted to George and delights in hearing him tell of the dream of having a farm, but he does not desire the dream of the American worker in the same way that George does. His understanding of George’s dream is more childish and he grows excited at the possibility of tending the future rabbits, most likely because it will afford him a chance to pet their soft hides as much as he wishes. Nevertheless, a dream is a dream, different for everyone, and George and Lennie share the similar attribute of desiring what they haven’t got. 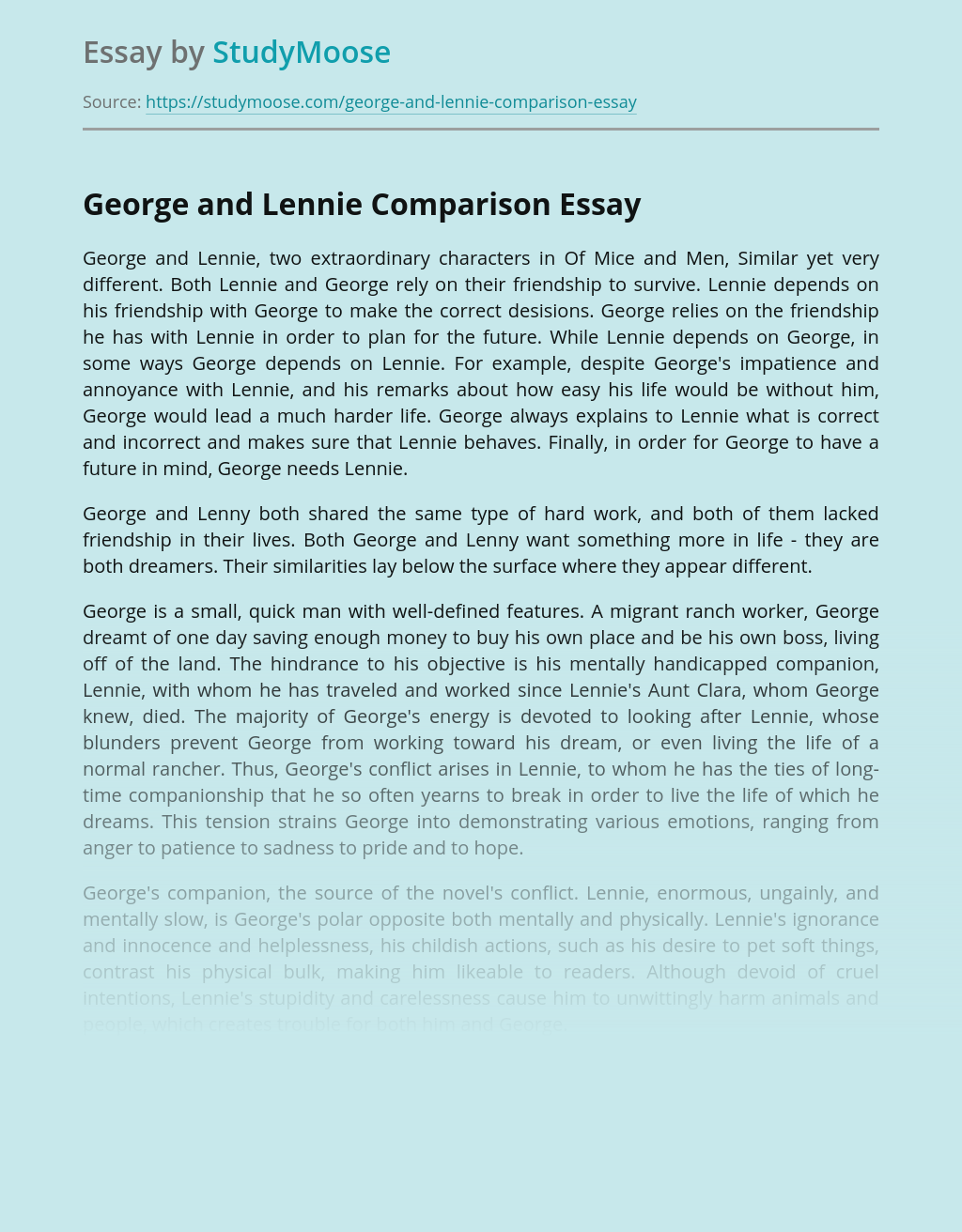 Turn in your highest-quality paper
Get a qualified writer to help you with
“ George and Lennie Comparison ”
Get high-quality paper
Helping students since 2015
Stay Safe, Stay Original