Of Mice and Men - Did George have any alternative than to shoot Lennie?

Of Mice and Men tells the story of two men, George and Lennie, who seem to be uncannily paired in a society of loners. Lennie is very tall, and very muscular with massive strength, but also appears to have a major learning handicap. George is shorter, and far less strong, but has the greater intelligence of the pair. Their companionship is rare, and even though George sometimes threatens Lennie that he will walk off and leave him, George never does. George sometimes becomes frustrated with Lennie and momentarily believes he would be better of with out him, so he could stay in one place for longer and spend his “fifty bucks at the end of the month on what ever he wanted”.

Don't use plagiarized sources. Get your custom essay on
“ Of Mice and Men – Did George have any alternative than to shoot Lennie? ”
Get custom paper
NEW! smart matching with writer

They do seem to rely on each other for more than companionship however. Lennie relies on George because of his lack of intelligence, and George carries on the companionship because of the thought that Lennie would die if he were not there to care for him.

Lennie also craves a parent figure, someone to care for him, and someone to one day give him something soft to touch and some rabbits to look after. The reward George has for this is hard to see, but eventually you see why they are together. Lennie represents company and security to George. There was also a promise George gave to Aunt Clara, a character that is talked about little and never seen, that he would look after Lennie, and that promise seems to mean a lot to both characters.

At the end of the novel, George is still looking out for Lennie. Lennie never hurt anyone due to being mean or cruel, just out of not knowing his own strength and out of defence when he was afraid. George knows this. But in the society in which ‘Of Mice and Men’ is set, the penalty for a death is death, and anyone who is weak, crippled or old with no use any longer was killed. This is shown clearly when Candy’s dog, his best companion was shot. This is almost foreshadowing of what is going to happen.

There are three pairs on the ranch, Curley and his wife, George and Lennie, and Candy and his dog. Curley’s hand is crushed by Lennie, and Lennie later kills his wife, ending in Lennie’s death. Candy’s dog is shot when the other men believe he has no more use on the ranch. After all that Candy and his dog had been through and all the years of loyal service that his supposed best friend had performed for Candy, when pressured into a decision, he chose to defy his loyal companion and make the decision on when he should die. Candy later is angry that he did not kill his dog himself. George has the same belief than Candy, when he killed Lennie he seems to oppose that belief.

George knows that in this society, when they find Lennie they will hang, bludgeon, beat and torture him to death. George does not want this tale to end in a painful death for his lifelong companion, and therefore he does not want Curley and the group of other ranch hands to find him alive, because the consequences will be far worse. George realises that the other options are to send Lennie from his side into a mental institution where he would be a danger to himself and a danger to others, or to run to the next town again, to complete the cycle once more and to have again someone else killed and to again have to run from another gang. George realises that they are both not options he is willing to try. George also realises that Lennie will one day realise that they will never have their own land, and the dream of providing for themselves will never come true.

“All kin’s a vegetables in the garden, and if we want a little whisky we can sell a few eggs or something, or some milk. We’d jus’ live there. We’d belong there” (p. 54).

There will never be any rabbits to tend to and if George and Lennie remain together they will never have enough money, because they are always on the run. George did not kill Lennie out of spite, not because of his thoughtless, innocent, act had dashed George’s hopes of having a small farm. Simply because the other options were so much worse. Lennie died believing that one-day they would have their own farm, with rabbits and alfalfa and enough to live on for them both. A happy place, with the sun and the rain and no one to boss them around. Just a place where they would belong. And Lennie died believing the dream that many other men had died dreaming of.

But there are two sides to the story, and people also believe that George should have tried to spare Lennie’s life. Due to his apparent lack of loyalty to Lennie and his selfishness he chose to take Lennie’s life. It is significant to the story how George decides to kill his friend. He does not even give Lennie a chance to get away from his pursuers but instead he shoots him in the back of the head just like what had been done to Candy’s dog.

This shows how, after all of the loyalty and love that both of these creatures had given to their respective “friends”, both of the superior creatures decide that they don’t need them any more and choose to end the dominated creatures lives in a less than honourable manner. However in Candy’s case it was more a cause of not being able to stand up to the other men on the ranch, but in George’s case, it was George either trying to spare Lennie, or to give up on the companionship because of greed and the belief that the universal dream was obtainable without Lennie behind his back.

When the other men find George, he manipulates the situation further, telling them that he murdered Lennie out of self-defence when he wrested the gun that Lennie supposedly stole from him. He rids himself of any blame for the killing. Slim senses George’s feeling of remorse over the situation. However, the book ends with Carlson wondering why George is upset, once again demonstrating that the other men cannot comprehend the bond of friendship between George and Lennie. Although Steinbeck is not trying to say that you can never trust the people that you call your friends, he is saying to be careful of those who call you a friend but only think of themselves while saying it. I, however, do not believe that George killed Lennie out of greed, I believe that the remorse George shows towards Lennie’s death is valid and enough proof of that.

I imagine George in two ways at the end of this novel. My wish is that George somehow gets enough money to buy his farm with Candy, and they live the dream. The probable ending is that George continues living, trying to scrape enough money to one day have his farm, but gives up hope, realises the dream will never happen and follows the other men, spending his fifty bucks in the cathouse and drink, to drown his sorrows.

Of Mice and Men - Did George have any alternative than to shoot Lennie?. (2017, Oct 30). Retrieved from https://studymoose.com/of-mice-and-men-did-george-have-any-alternative-than-to-shoot-lennie-essay 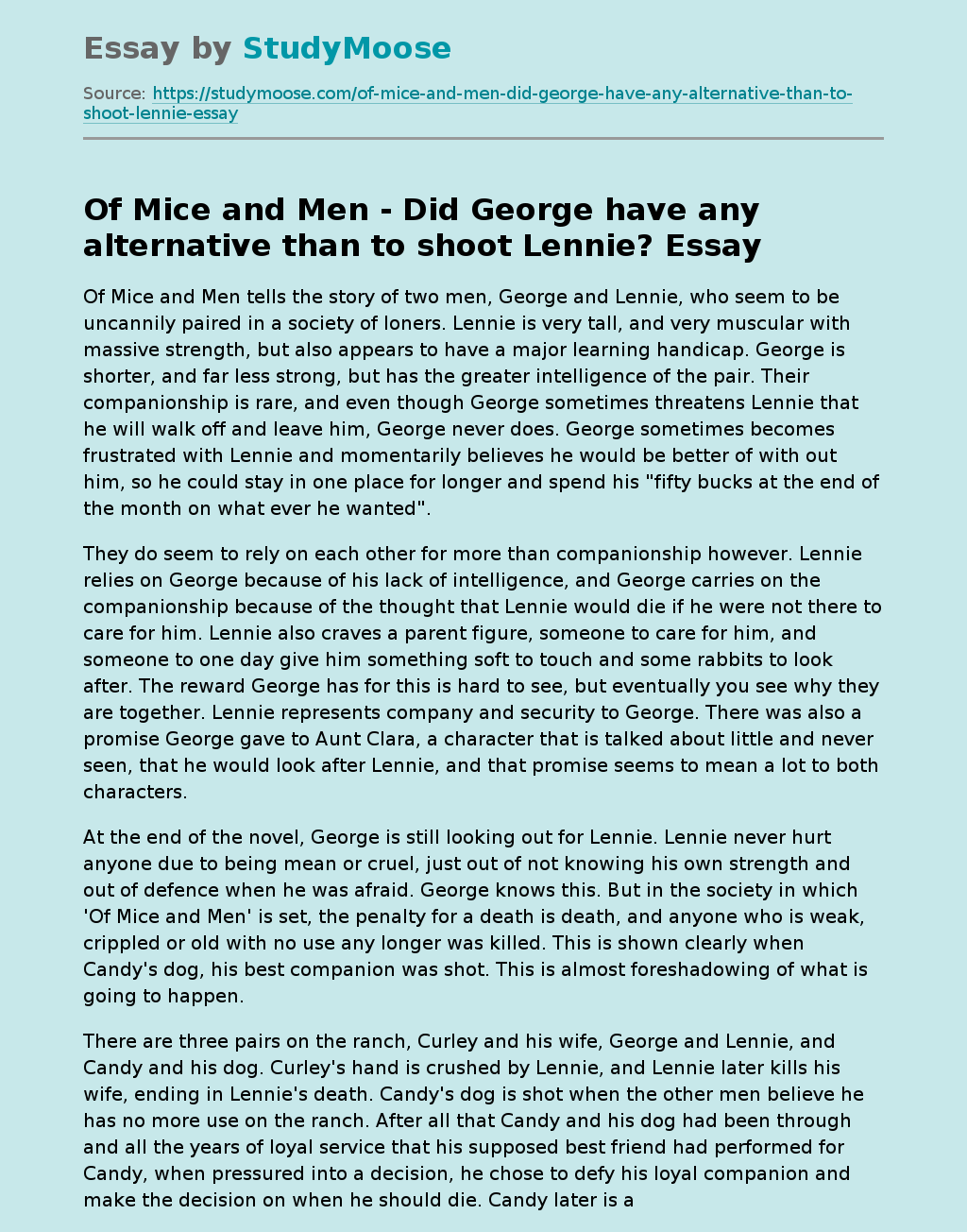