From an existentialism point of view, there is no right or wrong choice, since one gives an action value by the virtue of choosing it. Choices can only be judged on how involved the decision maker is when making it. Judging by this standard, the narrator is justified in killing Tyler, since he fully became involved in choosing to both accept and reject Tyler’s values by that action. “Existentialism’s first move is to make every man aware of what he is and to make the full responsibility of his existence rest on him.

Tyler does so through his acts of escalating violence and atrocity to provoke the narrator to confront both who he is and his responsibilities, culminating finally in his own death.

I shall also discuss the theme of consumerism as portrayed in the movie, and how the decision of shooting Tyler relates to the narrator’s interpretation of this theme. The narrator had been hesitant to assume full responsibility for his existence at the start of the movie. He dislikes his present circumstances- he is jaded with his current job and lacks a clear purpose, as illustrated by the quote ”A single serving package, a single serving…” Once he consumes the single serving, he is done.

He makes a fleeting impression in someone else’s life before he fades from their memory. He feels his existence is meaningless because he has no connections with anyone. He is not content with the present state he is in, but makes no active effort to consciously define his own existence. He shows bad faith in this respect, because he deceives himself into believing that he lacks complete freedom of involvement in making this decision. He is a coward by Sartre’s definition: “Those who hide their complete freedom from themselves out of a spirit of seriousness or by means of deterministic excuses.” He possesses the desire to redefine his existence by rebelling against the values in society, but this conflicts with his conscious mind (the ego), which restraints him from doing anything socially unacceptable. His conscious mind hides these unacceptable desires in the subconscious mind, coming up with excuses that prevent the narrator from fulfilling these desires.

Eventually, the repressed energy from these unconscious desires resulted in the fracturing of the ego itself- into two conscious minds, hence resulting in the manifestation of Tyler. Tyler represents everything that the narrator subconsciously wishes to be. He is the personification of the ID itself, representing the narrator’s repressed death instincts (our innate instinct for survival), aggression instincts (instincts for violence), and the libido. Before he meets Tyler, the narrator is defines his existence though furniture he purchases and assembles from IKEA. He attempts to make himself into a being-in-itself, believing his perfect state of existence can be reached by purchasing that last piece of furniture he needs. When the narrator’s house was bombed, annihilating the means by which he defines his existence, the narrator felt as though his existence itself was erased. “Every stick of furniture in there was my life.”

Tyler teaches him not to rely on material goods but to define his existence by his actions. The fight club thus became the new means through which the narrator could define himself through acts of fighting. The narrator learns to revel in violence and physical pain as a means of defining his existence and to transcend the physical limits of the body. He achieves the first step of self-awareness by satisfying his primal instincts for aggression. His first epiphany occurs when he realizes Tyler is himself. In a sense, he realized that he (as Tyler) is free and capable of inventing and creating himself as whom he chooses to be.

This is an important step because he now wants to assume responsibility for his existence. His second epiphany occurs when he shoots Tyler, and thus himself. On the first level, the narrator acknowledges his death instincts by confronting his fear of pain and death. He accepts Tyler’s ideas of experiencing death so as to be fully conscious of his physical existence. When he shoots Tyler, he does so with the awareness that he is shooting himself. This is the final step he needs to take in order to be fully aware of what he is. On the second level, by rejecting Tyler’s nihilistic ideas of destroying institutions and value systems, he chooses what values to stand for and thus creates his own purpose for himself. “In choosing his ethics, Man makes himself.” He also translates the belief in these values into the actual action of shooting Tyler, thus defining his existence through actual action. On the third level, by shooting Tyler, he assumes responsibility for all of Man, not just himself.

He assumes responsibility for Man because he invents what Man bshould be: one who does not act in an uncaring and destructive manner towards others. On the fourth level, shooting Tyler allows the narrator to be defined in a way he wishes to be defined in the eyes of the “other”. Shooting Tyler is crucial towards removing the existence of Project Mayhem. He does not want Marla to find out about Project Mayhem because he will then lose his connections with her. It is important to the narrator to have a close relationship with Marla. Firstly, she is the only surviving real human being he has a close relationship with in the movie.

Secondly, Marla, playing the role of the “other”, allows him to seek out knowledge about his existence and she is the condition for his existence. By shooting Tyler, he prevents the loss of this “other” that is crucial for his existence. Important themes discussed in the movie include consumerism. To be specific, it shows how the modern consumerist society affects Man’s determination of his existence. In Sartre’s words, how a change in the “a priori limits which outline man’s fundamental situation in the universe” affects Man’s determination of his existence with respect to these limits. According to Sartre, all configurations “either appear as attempts to pass beyond them or recede from them or deny them or adapt to them”. Consumerism imposes limits on Man to work and to consume, because only if Man works can he consume, and he can consume only if he works. He is emasculated because he is unable to fulfill his natural role as a hunter-gatherer as dictated to him by biology.

Man is limited or restricted in the sense he is unable to fulfill his primitive instincts. As seen in the movie, Tyler tries to pass beyond these limits by destroying symbols of consumerism, such as credit card companies, so as to “return to Ground Zero”. Since many people define their existence by numbers in their bank accounts, destroying the bank records will erase their previous existence and allow them to create their existence anew, much like how the narrator’s apartment was bombed so that he could create his new existence through Fight Club. Tyler’s ultimate goal seems to be changing the limits by which people define their existence by.

He envisions the destruction of modern civilization, and a regression back to a more primitive hunter gatherer state. “In the world I see you are stalking elk through the same canyon forests around the ruins of Rock feller Centre”. In the world he envisions, the new limits by which people will define themselves with respect to are undoubtedly physical strength and prowess. On the other hand, the narrator, like so many of us today, adapts to these limits by embracing consumerism as indoctrinated into him by society through advertisements.

He avidly purchases IKEA furniture and defines his existence by these material goods. In Tyler’s words, he works jobs he hates so he can buy shit he doesn’t need. He assumes that his furniture uniquely defines him as a person, from the “glass bowls with imperfections made by the simple and honest people of wherever” to “his yin-yang coffee table”, while missing the irony that IKEA is a chain-store that mass produces furniture. He is no other different from many other consumers of IKEA who believe that their furniture is unique on virtue of it being selected by them. At the end of the movie, the narrator realizes he needs to strike a balance between the two opposing configurations, one that is in the pre-consciousness state, afraid to confront his freedom, and the other that embraces existentialism and freedom to the point of reckless destruction. Shooting Tyler thus allows him to reunite his opposing configurations and strike a middle balance. Marla is an example of how a person recedes from limits that outline the human condition.

She does not know what values to choose to define her existence. As a result, she adopts a nihilistic attitude and attempts to hit rock-bottom by trying to court death. Lastly, another important theme in the movie is that of mental pain. Many characters in the movie experience mental pain because they are unable to reject the “being in itself” others force upon them. Thus, they cannot achieve a true state of “being for itself” This is because we “perceive others as a condition of our own existence”, as how Sartre puts it. According to Sartre, once we realize we exist, we realize the existence of others who are free to define us according to how they view us. We are objectified in the eyes of others because others view us as a “being in itself”. We lose our freedom through their perception of us. Only we looking back and viewing others as objects can we regain our freedom. Bob is viewed as a man who has lost his masculinity.

He accepts this “being in itself”, believing that he is condemned to this fixed and unchanging physical body. Thus, he suffers mental pain because he does not reject the attempts of “being in itself” others force upon him by realizing his freedom to create his own existence.

The narrator similarly suffers from accepting the “being in itself” society forces upon him- as a member of society whose purpose is to work, to consume and to obey his superiors. His ideal self-image is that of a strong and ruthless primal human being. However, he dares not embrace his freedom to reject this “being for itself” and work towards the transcendent goal of his ideal self-image. Thus, his mental pain caused Tyler to manifest, who violently abuses the narrator to symbolize the mental pain the narrator is experiencing. Tyler tries to push the narrator to be fully aware of his unconscious desires, and to assume responsibility for his freedom. Only when he confronts this mental pain (Tyler’s physical abuse) can he reject “being for itself” and achieve true “being-for-itself”, the state where he is constantly and freely choosing his future.

His decision to shoot Tyler was justified-because he is freely choosing to reject Tyler’s destructive ideas, and to transcend his initial transcendent goal of becoming Tyler. In conclusion, the movie has strong themes of existentialism running through it. The act of shooting Tyler was justified because it signifies the first step of existentialism for the narrator- he becomes fully aware of what he is, and assumes full responsibility of his existence. It also shows how human beings may choose to define themselves with respect to the limits of the world they exist in. Lastly, shooting Tyler allows the narrator to confront his mental pain and reach the true state of “being for itself”. 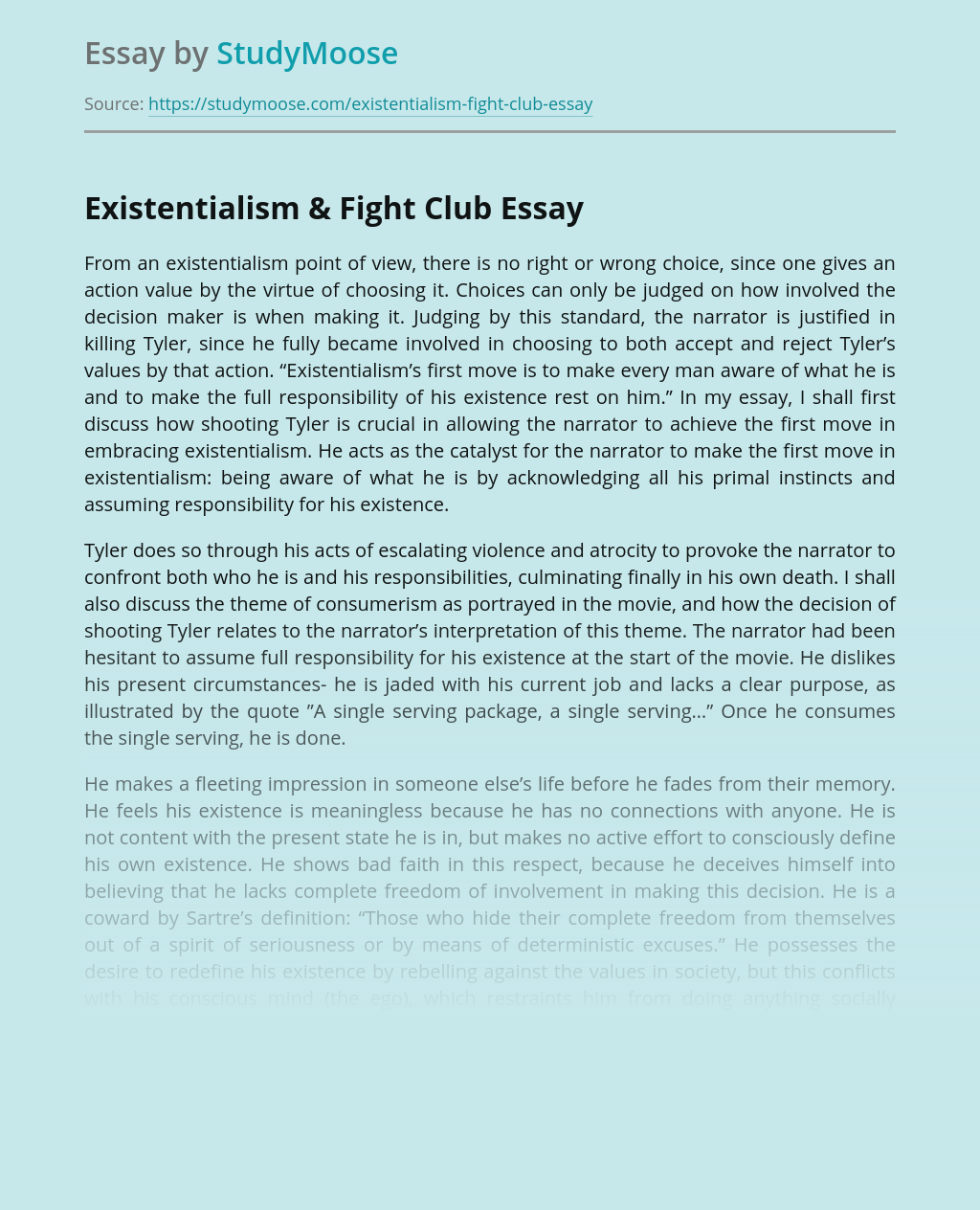