In the movie “Fight Club” is about the narrator, Jack’s, fantasy of an alternate reality, his personal shadow. Tyler Durden represents Jack’s unconscious collective shadow. Jack, the protagonist, has a meaningless, boring and empty life, and suffers from insomnia. Jack tries to lend color to his insignificant life by purchasing new commodities like his furniture which are the fetish items of the narrator and they provide him with more meaningful existence. Jack has a dull life and he could not find any time for his hobbies due to his busy business life.

He has no girlfriend or even a close friend. He does nothing to have fun and he suppresses all his instincts for pleasure in his unconscious. Although he is not happy about his life, every morning he wakes up, goes to work and travels frequently. He suffers from insomnia because he is suppressing his shadow. Later, he finds the idea of participating in cancer and disease support groups.

Jack lacks the courage to confront his shadow. Instead, Jack indentifies with her persona, the role the world expects him to play. As the movie progresses Jack gradually begins to become aware of his shadow, and how it motivates his behavior.

Understanding something about one’s shadow side is the beginning of self-knowledge. Without the realization of the shadow all real further psychological progress is blocked” (34). As I mentioned before, Tyler Durden is the collective unconscious side of Jack. In other words, Tyler represents the shadow of the narrator in “political confrontation”.

Jack projects onto Tyler, the enemy side, which we view as hopelessly corrupt, sadistic, vindictive, and inhuman. “The collective shadow, viewed as a component of the collective unconscious, is the archetype of collective evil and can be represented by such archetypal images as the Devil, the Enemy, the Bad Guys, and the Evil Empire” (33-4). Tyler slowly begins to take control away from the narrator.

The narrator gets pleasure from Tyler’s crazy, uncontrolled behaviors because Tyler does the things that the narrator imagines doing unconsciously, but was unable to do because of ociety pressure, which encouraged repressing his desires. Jung states, “Your shadow, the imperfect being in you that follows after and does everything which you are loath to do, all the things you are too cowardly or too decent to do” (35). The narrator gets pleasure from these anarchistic behaviors. Tyler also destroys the narrator’s house in order to prevent him from continuing his virtual life. Then, Tyler initiates a reaction like Jung’s shadow conception, full of violence and sexuality. He manifests his violence and forms an underground boxing club called Fight Club.

Hopeless people like Bob who has testicular cancer and many other people who are not happy about their lives, which are full of suppressed emotions and societal pressures, join Fight Club. Tyler also satisfies his sexual instincts with Marla whereas the narrator fails to do so. Tyler becomes a cult hero and he even manages to get paid without ever going to work because of the shadow’s charisma, self-confidence and revolutionary aspect. However, after a while we start to realize the negative effects of the shadow. The shadow, Tyler Durden, takes control completely and he gets out of balance.

Fight Club becomes an anarchistic group and Tyler prepares a big plan (Project Mayhem) for destroying all the banks, financial sector buildings. Tyler is thus transformed into a public enemy who wants to destroy the capitalist system. In the movie, Tyler says, “It is only when you have lost everything, you are free to do anything”. He wants to live in a primitive society in which everyone has nothing and everyone is equal. This feeling comes to his mind because of the influence of the shadow archetype. As Jung mentioned, archetypes are characteristics that reflect our primitive nature.

Tyler rants, “You are not your job, you are not your money in your bank account”. The shadow becomes very destructive, violent and dangerous as Tyler clearly becomes a monster who threatens society. Tyler sees society and the capitalist system as his enemies. Tyler shows us exactly all the aspects of Jung’s shadow concept: violence, sexuality, self-confidence, charisma, courage, madness and a lack of balance. What makes Tyler so strong is the narrator’s error in repressing his shadow for such a long time. After a period, the narrator understands that his conscious mind was taken over for a while and he begins to fight Tyler.

He gets rid of Tyler in the last scene by shooting himself and thus by metaphorically reducing the influence of the shadow, Tyler in his mind. The narrator thus achieves a new psychical balance and gets rid of his shadow Tyler Durden. Jung explains, “Consequently, the murder of the hero represents the need for change, for a ‘revaluation of earlier values,’ at midlife. The shadow figures of savage and dwarf represents the murderous energy as well as the insight, the shadow wisdom, needed to kill the hero and to transcend a youthful heroic attitude toward life”. 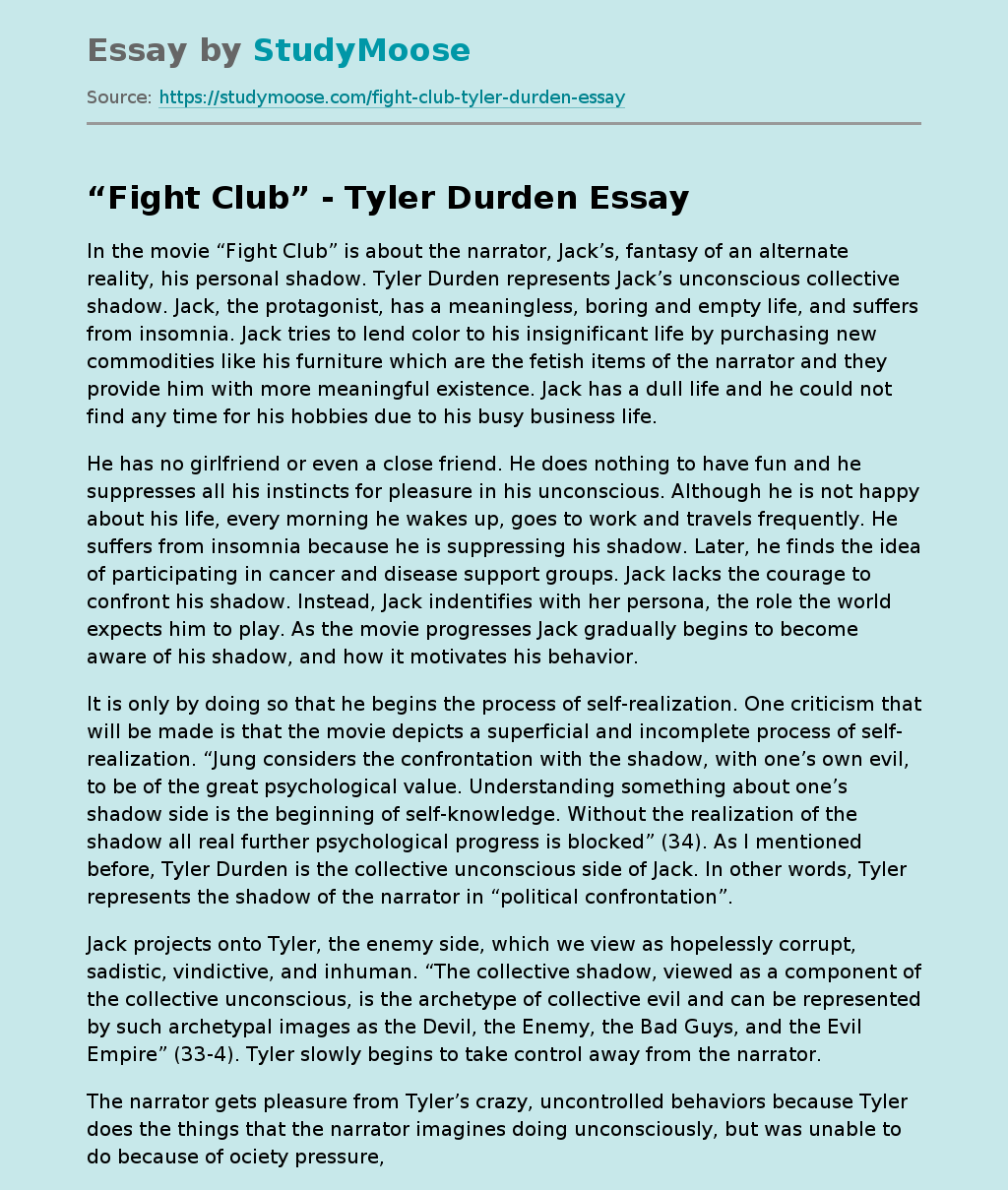