Conformity Is A Major Theme in Fight Club

Conformity is a major theme in Fight Club, and there are a number of specific scenes that display the rejection of it and characters falling victim to it, sometimes unbeknownst to them. The Narrator, our main character, is a complex individual. He fits into almost every textbook example of social psychology. He is a complete nutcase. In fact, he is so incredibly insane, that he creates an imaginary friend with whom he transforms himself into a different person, free from the bonds of society, free from conformity, free to change the way he lives.

Turn in your highest-quality paper
Get a qualified writer to help you with
“ Conformity Is A Major Theme in Fight Club ”
Get high-quality paper
NEW! AI matching with writer

The film starts off with the Narrator losing sleep, for what reason we aren’t sure. He then proceeds to tell us how he lived his life. He works a 9 to 5 job in a cubicle with people that dress business casual. He owns a small apartment filled with furniture, appliances, and even dishware that he felt defined him best as a person. His Strinne green striped sofa.

Rislampa wire lamps made out of environmentally-friendly unbleached paper. The Hovvetrekke Home Exerbike. He is obsessed with creating a self-image that is socially acceptable to others in his life.

The Narrator starts breaking out of this normative mold when he meets Tyler Durden. He even proposes during a montage of his daily routine on the job, “If you wake up in a different time, in a different place, could you wake up as a different person?” Tyler is his fellow conspirator in his personal resistance, his partner in crime.

He needed someone else to resist the social norms with, so he took the easy way out, and made one up.

After the Narrator’s apartment blows up, he grabs a couple drinks with his new imaginary friend, and then shacks up with him. They start fight nights in the parking lot behind Lou’s tavern. As their group grows larger, they move it to Lou’s basement. The more Tyler and the gang meet at their fight club, the less the Narrator cares about his job and life, and the more anti-conformist he becomes. He strolls into work disheveled and with dried blood on his shirt. He’s missing some teeth. He smokes indoors. He just doesn’t give a shit.

At one point our two main characters get on a bus. The Narrator glances up at a Gucci ad and says, “I felt sorry for guys packed into gyms trying to look like how Calvin Klein or Tommy Hilfiger said they should,” and remarking to Tyler, “Is that what a man looks like?” to which he responds, “Self-improvement is masturbation…now, self destruction…”

This particular scene is very ironic, as the Narrator is shunning something that he actually wants to be—Tyler is a projection of his ideal self. He even reveals this in the hotel room scene where the Narrator “realizes” that they are the same person: “All the ways you wish you could be, that’s me. I look like you wanna look, I fuck like you wanna fuck, I am smart, capable, and most importantly, I am free in all the ways that you are not.” Therefore, the Narrator is actually conforming by creating a self that is generally more likeable and accepted in society’s eyes. He caves in to normative social influence, and at the same time believes that he has completely rejected it. There is a double meaning to this however, in the one line that starts it off: “You were looking for a way to change your life. You could not do this on your own.”

Tyler was the ally the Narrator needed to break the monotony of his daily routine, to break free from normative social influence. We need just one other person to believe in the cause. There can be a leader, but nothing will happen just because of one person. If you are starting a movement, or a revolution in this case, at least one other person needs to join your cause, and believe in it. That one member needs to privately accept the fact that what you are talking about, what you preach, is the actual truth. And, as more people join a movement, the less risky it is for others to join. “Fight club. This was mine and Tyler’s gift. Our gift to the world.” Tyler gave every “normal” man the keys to himself, the one everybody wants to be.

As their fight club grows progressively larger, it raises the question: why are so many others conforming to something that they would normally never take part in? Are they rejecting social norms as well? Or has this fight club in turn become the norm, and therefore members are joining it to fit in?

Perhaps it is a case of minority influence, when a few influence the many. Tyler and the Narrator have held the same viewpoint for a while now, months even, that they do not care about clever art or Swedish furniture, and they are comfortable admitting that they have scars from fighting. With this unwavering view, others start to take notice, and even begin to respect their ideology. They join fight club to become loyal members. After a while, Tyler decides that they have to expand or “move out of the basement,” and hence creates Project Mayhem.

People do not always cave into peer pressure. If that is true, then when do we break? When do we give in and conform? According to Bibb Penis Latané’s social impact theory, it all depends on three specific factors: strength, how important the group is to you; immediacy, how close the group is to you in space and time; and the number of people in the group. The last factor operates differently than you might think however—the larger a group is, the less each additional person has an influence on others. Ever since starting the first fight club, Norton’s character has garnered such a reputation that he has gained a following. People start showing up on his doorstep, waiting and waiting until they gain permission to enter the house and start “training.” A sole applicant dressed in all black waits on their porch, by himself, for what appears to be days on end. Tyler comes out a talks smack, beats him with a broom, and talks some more smack. But the applicant isn’t going to give up easy.

He wants to be accepted, and is willing to put himself through this rigorous test to become Project Mayhem’s first member. After Tyler lets him in, he shaves his head, with Tyler remarking that he looks like a monkey ready to shot into space. He has mentioned this earlier in the film: “The first soap was made from the ashes of heroes; like the first monkey shot into space! Without pain, without sacrifice, we would have nothing.” As soon as the first member is in, two more show up on the doorstep. It grows and grows and grows until Project Mayhem is no longer a small group, but an army. The Narrator says during this sequence “Sooner or later, we all became what Tyler wanted us to be.” Which was what? Mindless, obedient robots. And, since the first (and second) rule of Project Mayhem is “you do not ask questions,” not a single member can question the tasks they are given, and therefore are forced to conform to Tyler’s (or for the sake of making sense, the Narrator’s) wishes.

Like the Milgram experiments and the My Lai massacre, Tyler’s robots are so obedient, that they won’t hesitate and question their actions or accept personal responsibility—they just do it. Tyler is capitalizing on the fact that they respect him for who he is and what he has done. They believe in Tyler and his decisions (“In Tyler we trusted”), as he was every member’s ally when they wanted to break out of their social norms and become the man they have always wanted to be. Obviously everybody thought about it. “People do it every day. People talk to themselves, people see themselves as they’d like to be.” Their basement get-togethers were right in everyone’s face—Tyler just made it visible. It was on the tip of everyone’s tongue; Tyler just gave it a name.

Without the ability to question authority, Tyler’s “space monkeys” start wreaking havoc all across the city. It started out as “homework assignments,” destroying satellite antennas, magnetizing video rentals, and defacing billboards. Then it was amped up: trashing franchise coffee bars, setting buildings on fire, and blowing up pieces of corporate art. Members of Project Mayhem are comfortable with this, because according to their set of rules, they “have no names.” This is deindividuation at its finest. With such a large group of people, all in this case anonymous, nobody takes any responsibility for their actions. They even wear ski masks on a couple of their assignments, further deindividualizing them. A study done by Robert Watson in 1973 found that warriors who hid their identities before going into battle—for example, by using face and body paint—were significantly more likely to kill, torture or mutilate captive prisoners than warriors who did not hide their identities.

Thanks in part to their ski masks, one of the members of Project Mayhem dies on their last assignment; his body is brought back to the house. Here conformity is at its most rampant, as members will snap to whatever direction is given in a moments notice. Angel Face (Leto’s character) tells them to bury the body and immediately they start to lift it off the table. The Narrator stops them, shouting that he is a real person, a friend of his, a man with a name. One member instantly takes this information and transforms it to fit within the properties of their group, claiming “in death, members of Project Mayhem, have a name.” The other space monkeys surrounding the table then immediately start chanting his name, over and over. It is at this point that our main character snaps, and takes off to find out what kind of monster he created.

Conformity Is A Major Theme in Fight Club. (2016, Jun 06). Retrieved from https://studymoose.com/conformity-is-a-major-theme-in-fight-club-essay 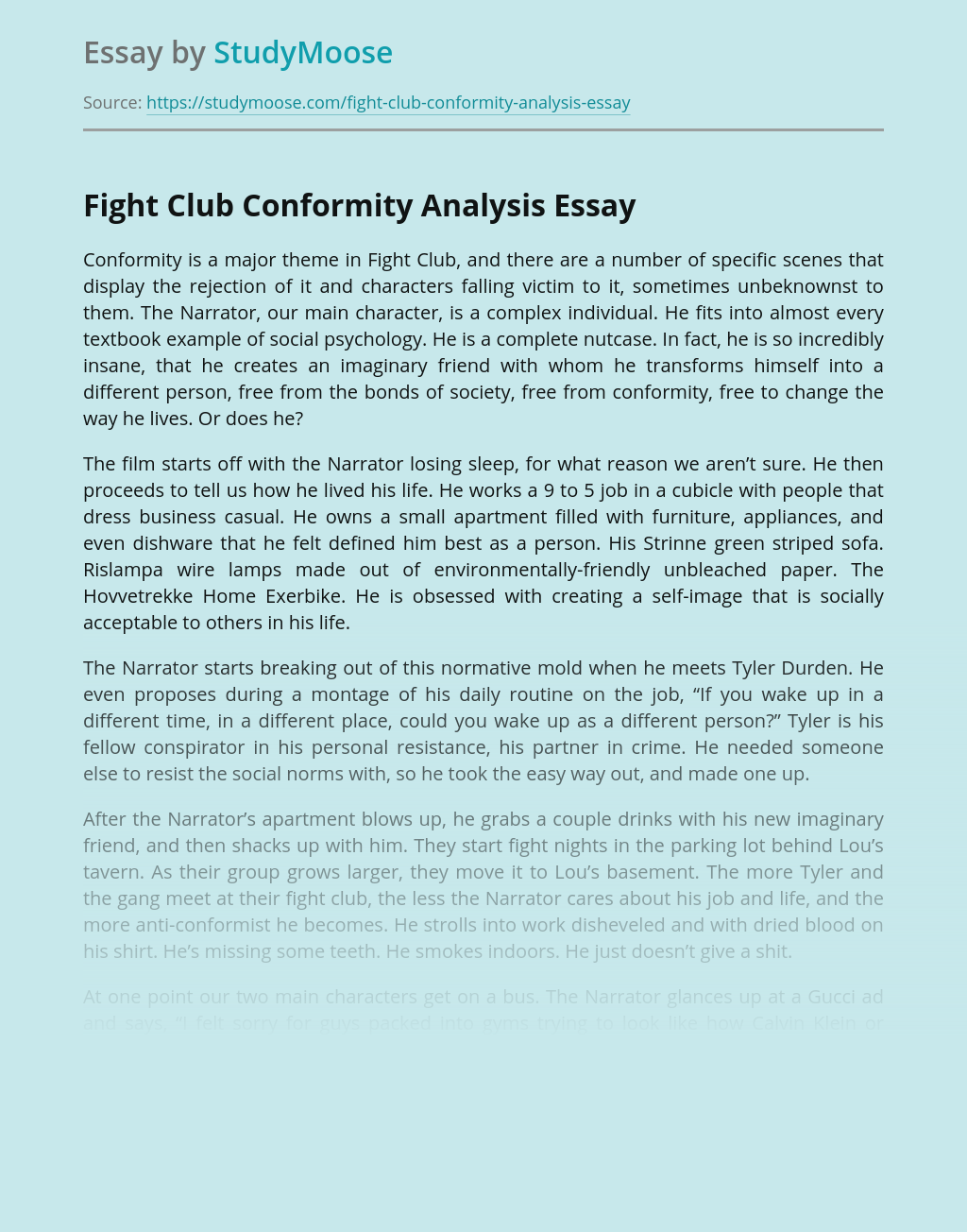 Turn in your highest-quality paper
Get a qualified writer to help you with
“ Conformity Is A Major Theme in Fight Club ”
Get high-quality paper
Helping students since 2015
Stay Safe, Stay Original