Tyler Perry was born in new Orleans on September 13,1969 with three other siblings. His biological name was emmit Perry Jr which he was named after his father until he changed it legally to Tyler Perry due to the fact that him and his father did not get along because his father was an abusive parent.when tyler was younger he never liked going home he went so far as trying to commit suicide because of his father also because he has been molested by his friends mother and three other men.

Don't use plagiarized sources. Get your custom essay on
“ Review of Tyler Perry as Famous Person ”
Get custom paper
NEW! smart matching with writer

when tyler got older in his early twenties he moved to Atlanta,GA homeless and addicted to drugs .but tyler use to write letters to himself that was his way of letting all his anger out about his shipwrecking past.but one day one of tylers letters got published and they turned it into a play it was some income for him but not much .tyler never gave up his dreams and kept on pushing forward.

then tyler came out with a play called “ I CAN DO BAD ALL BY MYSELF” and in weeks his play was number 1 in the U.S .

Tyler Perry was named the “highest paid male entertainer in the world”, earning $130 million last year (Mail Online). What makes Tyler Perry’s work so popular in the acting business? The makings of his plays come from a very strong foundation. “It is easier to write about something that was experienced than to make something up” (Perry, 2010).

Tyler Perry tells stories of the things that he is familiar with. Also, he bases his plays off of things that he has been through or someone close to him has been through. His significance is that he has a real story to tell, and he is determined to have it heard. Tyler Perry was born in New Orleans, Louisiana, as Emmitt Perry, Jr. His family consisted of three siblings, his mother, Willie Maxine Perry, and his father, Emmitt Perry, Sr., a carpenter. (Jet). Perry once said of his father, “his only answer to everything was to beat it out of you.”(Perry, 2010) As a child, Perry once went so far as to attempt suicide in an effort to escape his father’s beatings. Unlike his father, his mother took him to church each week, where he felt as though that’s where he belonged. At one point in his life, Tyler attempted suicide in an effort to escape his difficult situation.

Perry was born in New Orleans, Louisiana, as Emmitt Perry, Jr., the son of Willie Maxine Perry (née Campbell) and Emmitt Perry, Sr., a carpenter.[11] He has three siblings. [12] Perry once said his father’s “answer to everything was to beat it out of you”.[13] As a child, Perry once went so far as to attempt suicide in an effort to escape his father’s beatings. In contrast to his father, his mother took him to church each week, where he sensed a certain refuge and contentment.[13] At age 16, he had his first name legally changed from Emmitt to Tyler in an effort to distance himself from his father.[14] Many years later, after seeing the film Precious, he was moved to relate for the first time[15] accounts of being molested by a friend’s mother at age 10; he was also molested by three men prior to this, and later learned his own father had molested his friend.[16] While Perry did not complete high school, he earned a GED.[17]

In his early 20s, watching an episode of The Oprah Winfrey Show, he heard someone describe the sometimes therapeutic effect the act of writing can have, enabling the author to work out his or her own problems. This comment inspired him to apply himself to a career in writing. He soon started writing a series of letters to himself, which became the basis for the musical I Know I’ve Been Changed.[18]Perry received a $5.5 million budget to fund his first movie, Diary of a Mad Black Woman, which went on to gross $50.6 million domestically, while scoring a 15 percent approval rating at the film review web site Rotten Tomatoes.[22] On its opening weekend, February 24–26, 2006, Perry’s film version of Madea’s Family Reunion opened at number one at the box office with $30.3 million. The film eventually grossed $65 million. Perry and his co-stars promoted the film on The Oprah Winfrey Show. As with Diary, almost all of the Madea’s earnings have been generated in the United States.[23] Perry’s next Lionsgate project, Daddy’s Little Girls, starred…

Tyler Perry grew up living with his parents in New Orleans. Once he became grown he moved to Atlanta, Georgia. Tyler knew that black people were very successful in Atlanta. Tyler Perry was hoping to be a play writer. In the process of trying to become a play writer, he went from being homeless, to being recognized, to being successful. In the move to Atlanta, life was not easy for Tyler Perry. He would land jobs in small supermarkets, so he could save money to put towards his first production. He had written a play called “I’ve been changed.” Finally he had saved up enough money for the production of the play. First, Tyler rented a small theatre that seated 215 people.

Second, he had auditions and found his cast, but on opening night only 30 people showed up. Tyler lost everything. He had put every dime he had into that play. Tyler Perry had become homeless, he had nothing to eat and he was sleeping in his car. His mother pleaded with him to come back home, but he refused. He was determined to do his play. For the next seven years he did plays and they would fail. He said “This is what God wants me to do.

Tyler Perry should be recognized for accomplishments he has made throughout his life. Many people have difficult childhoods or go through certain things which affect their life in a negative way. After everything Perry went through during his childhood, he didn’t let it get the best of him. Instead, he took all that negative energy and through plays, films, television, and books he showed people that no matter what you been through you can reach your dream.

Emmitt Perry Jr. otherwise known as Tyler Perry was born in New Orleans, Louisiana on September 13, 1969. When Tyler was young he was molested by several adults. Also Perry went through several acts of physical abuse by his father because his only answer to everything was to “bet it out of you.” When he turned 16 he changed his first name to Tyler to put some distant between himself and his father. Although he did not complete high school he did earn his GED. After an inspirational episode of Oprah Winfrey Tyler started writing letters to himself. During the 1990’s Tyler moved to Atlanta and shortly after his first play I Know I’ve Been Changed was performed. Even though the play focused on critical issues including child abuse and rape it received less… 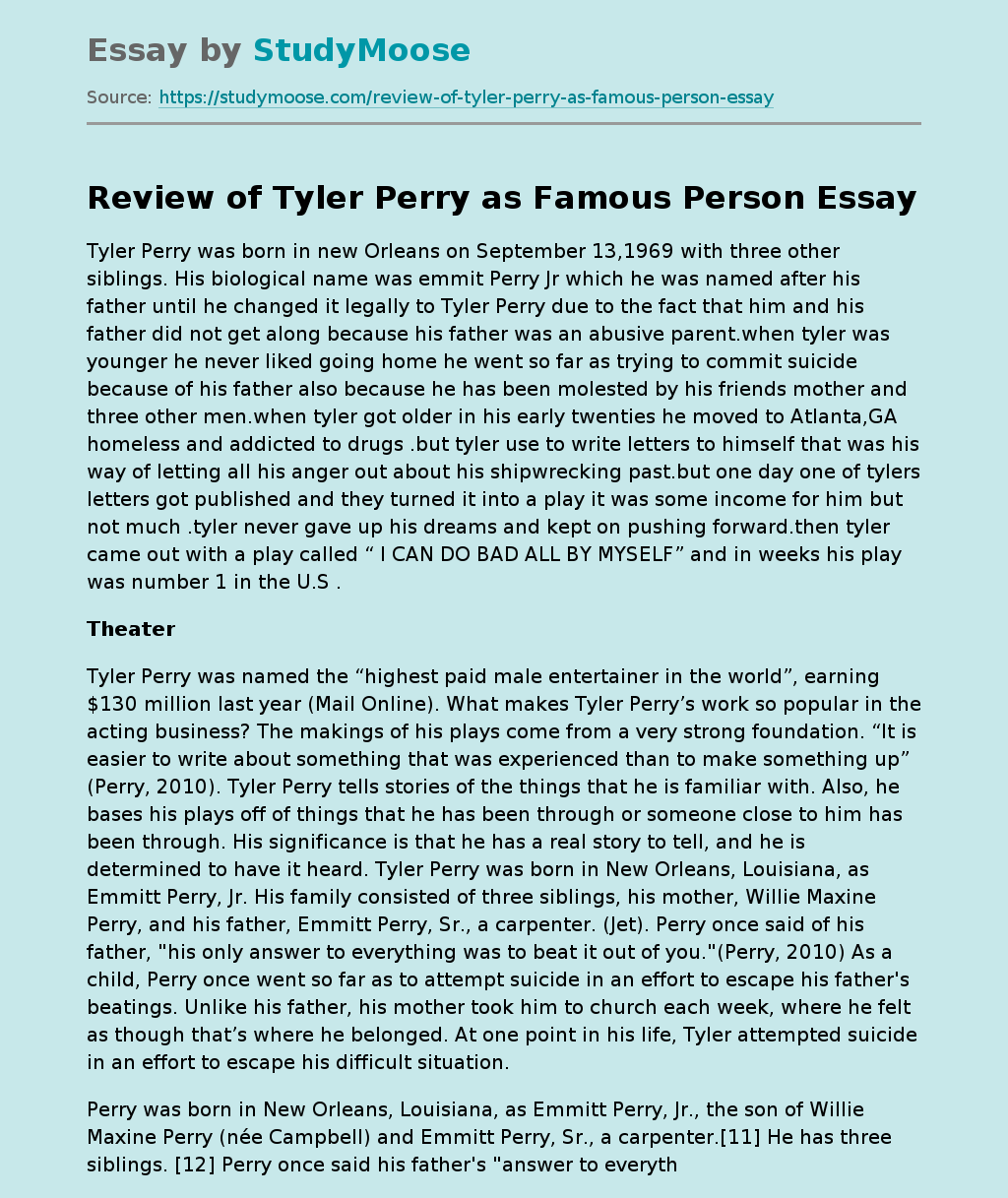