The Themes of Isolation and Loneliness in “Of Mice and Men”

Undoubtedly, the themes of isolation and loneliness indeed dominate the novella and can be seen by observing and comparing all other characters in the novella to George and Lennie. John Steinbeck wrote the novella “of mice and men” in 1937, set, during the time of the American Great Depression, in Salinas, California. During the time of the Great Depression, the economic positions exploited many ranch workers, like our two protagonists in the novella; George and Lennie, whose dream for a farm was nullified by brutal and cruel forces beyond their control.

Don't use plagiarized sources. Get your custom essay on
“ The Themes of Isolation and Loneliness in “Of Mice and Men” ”
Get custom paper
NEW! smart matching with writer

However, their plight was ultimately distinguished by their resolute compassion and friendship. During the Great Depression, isolation and loneliness were two very common attitudes. Isolation and loneliness are two similar but different words, Isolation means the process of being excluded or remaining alone, whereas loneliness means a sadness that stems from not having any companions or friends. Loneliness is an evident theme in the novella as well as isolation. However, there is another dominator of the novella, friendship.

The novella “of mice and men” depicts loneliness as a complex emotion that usually pressures individuals to severe behaviours. Steinbeck uses characters such as Curley’s wife, Crooks and Candy, to mirror on the prejudicial era that elementally leads to the character’s loneliness and specific behaviours. “A guy needs somebody to be near him. A guy goes nuts if he ain’t got nobody. Don’t make no difference who the guy is, long as he’s with you. I tell ya.

When Crooks states that; “A guy goes nuts” and “He gets sick” Steinbeck hints towards the mental consequences of too much loneliness. For example, using the word nut, is another word for mad and sick, and in this case, sick is another word for mentally sick. Black people were confronted with racial discrimination and segregation from the supreme white society during the Great Depression. Crooks, being the only black man on the ranch in the book “of mice and men,” overstates the racial discrimination in the novella. However, unlike Candy or Curley’s wife, Crooks unfortunately accepted his status in society, which resulted in him becoming lonely. Crooks, being one of the characters who represented the loneliness brought about by the Great Depression. Crooks realized his loneliness and because of his situation, and role in society, he tried to shun himself from everybody. The Great Depression was obviously a time of discrimination, which Steinbeck made clear in “of mice and men.” In this way, Steinbeck undoubtedly made it clear that loneliness brought about by discrimination does in fact affect a person’s behaviour, actions and way of thinking.

The result of coerced isolation during the 1930s Great Depression had grave effects on people’s lives from different types of discrimination, and John Steinbeck embodies every-one in his novella. “Seems like they ain’t none of them cares how I gotta live” (page 99). Curley’s wife states in anger that nobody cares about her, when all the men including her husband, Curley, went to town for entertainment. This quote depicts how she was practically abandoned and wasn’t cared for, even by her own husband. Although Curley’s wife and Crooks are isolated and lonely, their actions and behaviours are vastly different. Where Crooks accepted the fact that he wasn’t wanted, Curley’s wife tried to go against the fact that she was a mere house wife and not a movie star by wearing bright, flashy coloured clothes to contrast to the dull farm and to state that she didn’t belong there. Clearly, Steinbeck allows the reader to empathize for Curley’s wife in Chapter 5, as a person who wants companionship and someone who must deal with the effects of segregation and isolation.

During the Great Depression, women, especially Curley’s wife, in “of mice and men” were treated as lesser beings. An object that didn’t have any other purpose than to serve their families or others by becoming insignificant weavers, housewives or brothel workers. Many women were employed during this time but if they didn’t have a job they would stay at home, isolated, like a prisoner, just like Curley’s wife. Evidently, Steinbeck portrays Curley’s wife as a character whose isolation from other people clearly impacted her mood, decisions and behaviour. In the novel, John Steinbeck depicts George and Lennie having a loyal and trusting friendship, whereas others experience loneliness because they don’t have any companions or friends. “We got a future. We got somebody to talk to that gives a damn about us…” (page 15) Steinbeck ultimately sets George as Lennie’s babysitter or guardian in certain situations. Without George, Lennie would clearly be unable to survive the harsh conditions of the Great Depression and though Lennie is a terrible burden and George could undoubtedly live a much better life without him, as stated “when I think of the swell time, I could have without you, I go nuts. I never get no peace.” (page 13), however, despite the heavy burden called Lennie, George persevered and developed a strong bond with Lennie, an example is when George mercifully killed Lennie instead of letting Curley torture him. “Somebody to talk to that gives a damn about us”, before the end of chapter 1, George assures Lennie that their relationship is special. That they have a relationship different from everybody else, that they have each other to look after each other.

The Themes of Isolation and Loneliness in “Of Mice and Men”. (2020, Sep 07). Retrieved from http://studymoose.com/the-themes-of-isolation-and-loneliness-in-of-mice-and-men-essay 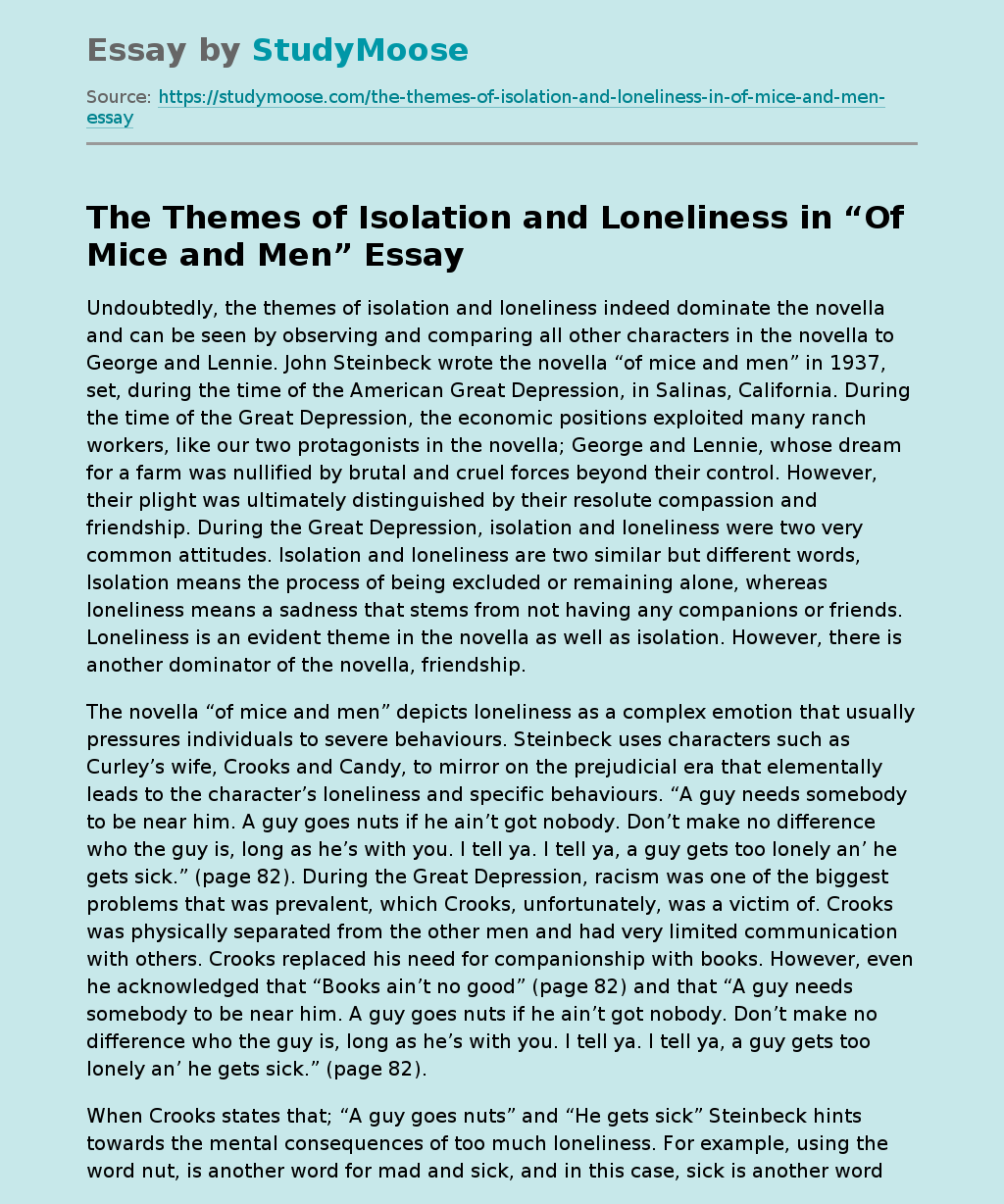