A Rose for Emily Analysis

In “A Rose For Emily”, Emily was the one who was portrayed as the victim. Her father was very controlling to the point where he wouldn’t let her decide who she could marry. She became so dependent on her father that when he died, she became a completely different person. She had no idea how to function in society as her own individual person. The one person she knew and loved was taken away from her. She was in fact “left alone, and a pauper” (Faulkner 30).

Don't use plagiarized sources. Get your custom essay on
“ A Rose for Emily Analysis ”
Get custom paper
NEW! smart matching with writer

Her father left her little money but a prestigious name, which meant that people in the town treated Emily differently. They did not make friends with her, not due to the fact that they did not like her, but because she came from a prestigious family. She would not pay for her taxes due to the loophole found by the town mayor. Essentially he had “invented the tale, to the effect that Miss Emily’s father had loaned money to the town, which the town preferred this way of repaying” (Faulkner 29).

The townspeople did not go reach out to her and support her. As if it was karma due to the fact that she did not treat the townspeople with respect, she even gained and became poor. The townspeople understood “that with nothing left, she would have to cling to that which had robbed her as people will”(Faulkner 31). They did not hold it against her that she had trouble handling this situation. Emily is given the “respectful affection of a fallen monument”(Faulkner 28).

When a man by the name of Homer showed up in her life and had actually taken interest in her she was very determined to stay with him forever. She was so shocked by his refusal to marry her, so she simply made it impossible for him to leave her. She made sure of it. “She will persuade him yet, because Homer himself had remarked – he liked men, and it was known that he drank with the younger men in the Elks’ Club – that he was not a marrying man.” (Faulkner 41). Emily had them both dressed up in wedding attire and then proceeded to poison him so that she could pretend they had been married.

Emily had gone through something extremely horrible and could not cope with it whatsoever. She was somebody who had it all and then lost everything. If anyone else were put in her shoes and experienced the things she was going through, they too might also do something as crazy as what she did.

A Rose for Emily Analysis. (2016, Apr 01). Retrieved from https://studymoose.com/a-rose-for-emily-victim-analysis-paper-essay 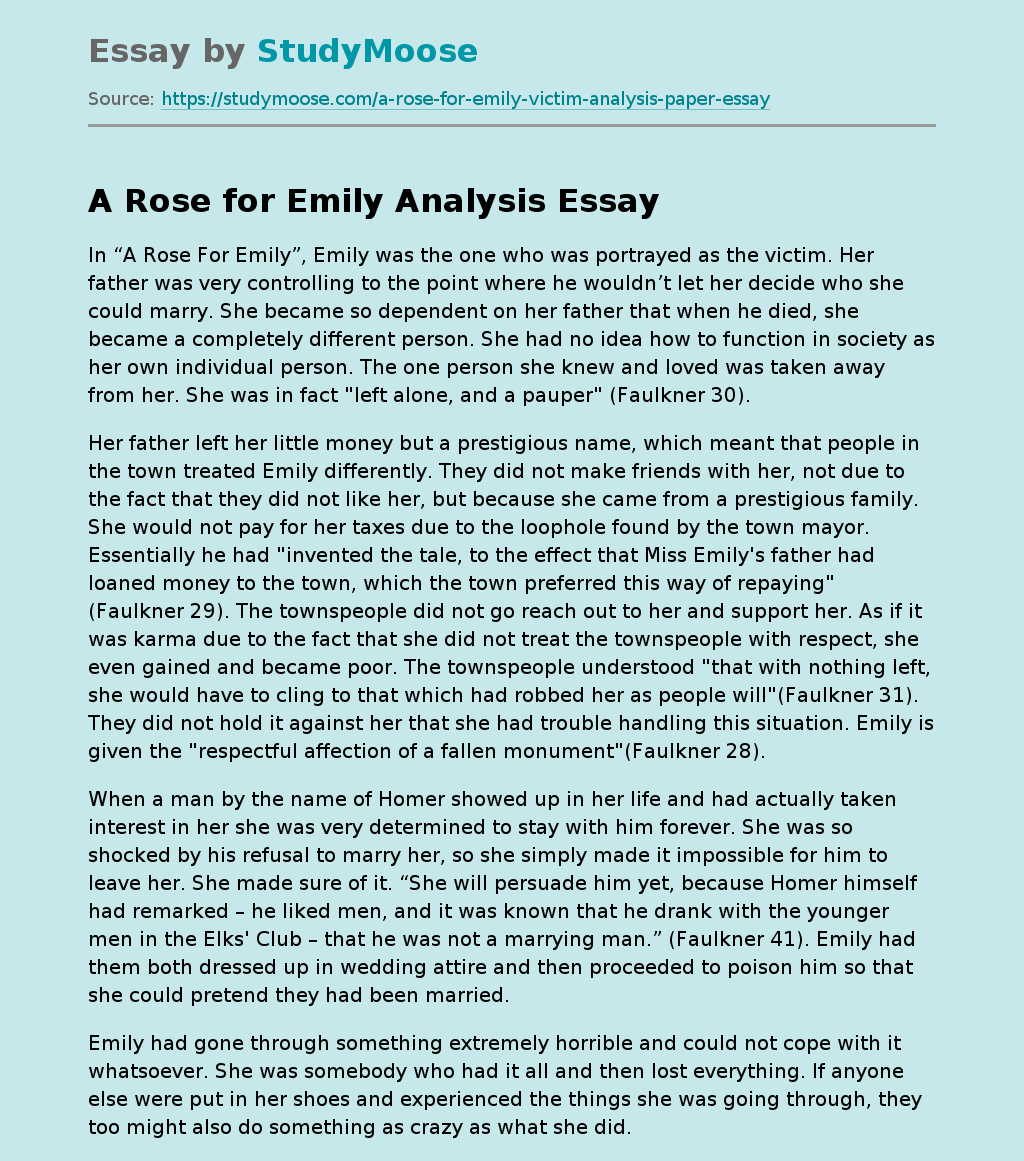