Character Analysis of Emily Grierson: “A Rose for Emily”

Emily Grierson was a southern belle who represented the old ways of the south. A woman, who was stubborn, unchanging and unable to let go of her haunting past took both her burdens and the old ways of the south to her grave. Throughout the story the narrator refers to her as “Alive, Miss Emily had been a tradition, a duty and a care, a sort of hereditary obligation on the town.” tradition meaning that she was sort of royalty to the towns people because her father was the mayor of the town.

Don't use plagiarized sources. Get your custom essay on
“ Character Analysis of Emily Grierson: “A Rose for Emily” ”
Get custom paper
NEW! smart matching with writer

This “royalty” gave Emily a sense of entitlement which could be seen throughout the story. An example would be when we she went to the store to buy some poison, she wanted the strongest poison the owner had to offer which was arsenic, a type of rat poison. Although the druggist, by law has to know what she is going to use the poison for, Emily refuses to answer and continues to stare at the man until he decides to give her the arsenic.

This is one of the many examples of how Emily thinks she is somehow above the law and should not be questioned for her actions. Another example of her stubborn ways would be a few years later when she refuses to pay her taxes because Colonel Sartores said that she didn’t have to. She states that “ I have no taxes in Jefferson. Colonel Sartores explained it to me.” The sheriff continues to reason with her by informing her that the colonel sent a letter saying that she did in fact have to pay taxes but once again, she refuses to believe it because she is stubborn and stuck in her own ways.

It seems that she has this need to want to control everything because she had an aunt who was mentally unstable. Going back to the tax incident it turned out that the colonel has been dead for ten years and there would be no way of checking with him because of this, this apart of the story reveals that she seems to be living in her own reality that she is living in the past. Another example of this is when her father died, her father sheltered her a lot shooing away boys so she became very isolated early in life. When her father died, she clinged on to the very thing that kept her from living a life of her own because that was the only life she had ever had. This event seemed to have left her in a depressed state where she would never leave the house until she meets a man named Homer Baron. Baron was a Yankee or a man from the north who took an interest in Emily, they were often seen together in town and most people thought that they were married. When Emily found out that baron was not the “marrying type” she decided to take matters into her own hands and killed baron with arsenic so that he would never leave her.

Character Analysis of Emily Grierson: “A Rose for Emily”. (2016, Mar 05). Retrieved from https://studymoose.com/character-analysis-of-emily-grierson-a-rose-for-emily-essay 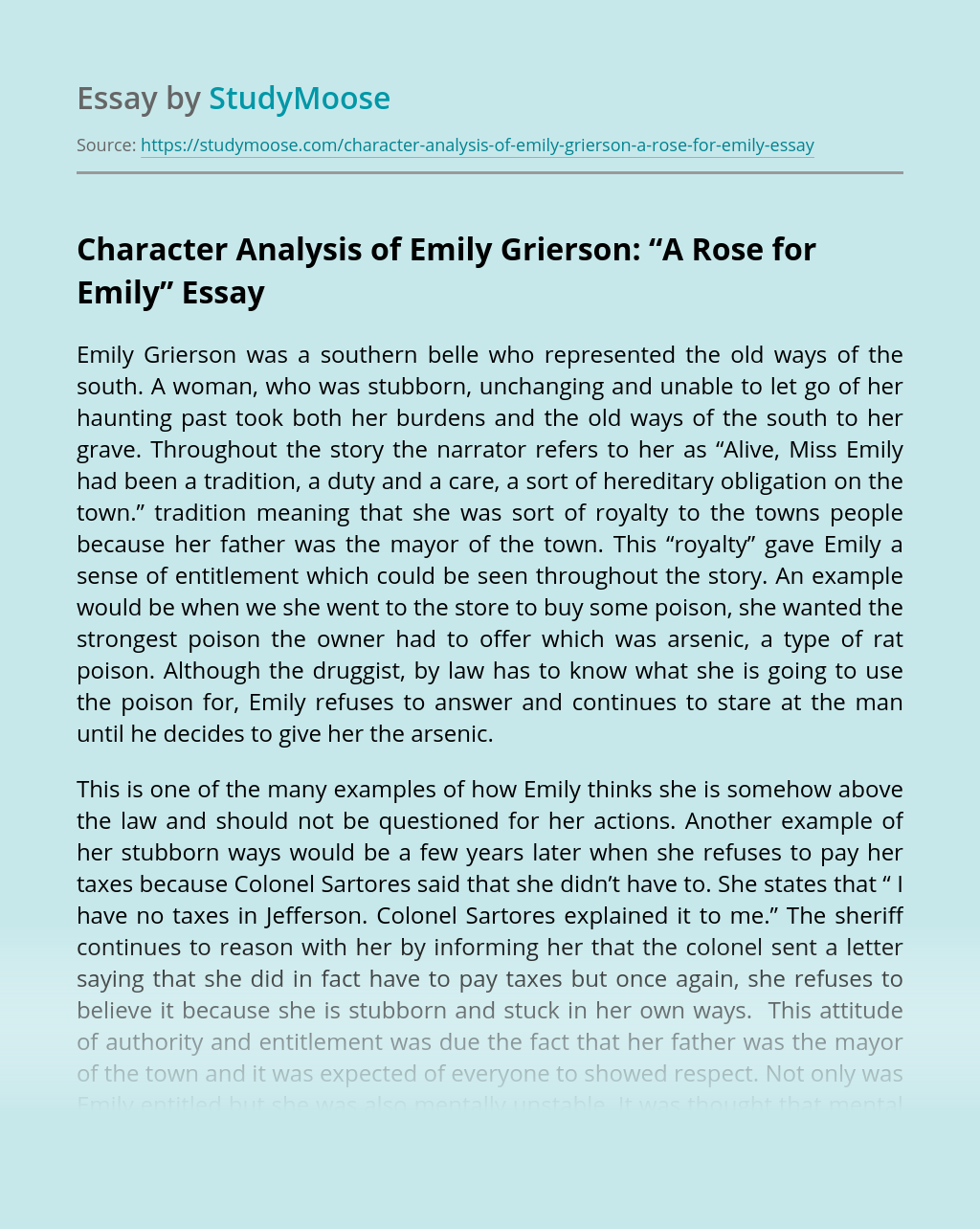