'The Yellow Wallpaper" and "A Rose for Emily"

“A Rose for Emily”, is a story written by William Faulkner, who wrote many stories which include Sartoris, The Sound and the Fury, and As I Lay Dying (DLB, 1991). In “A Rose for Emily”, the reader sees a woman, Emily Grierson, who lives a life of loneliness, and how her attitude changes with this loneliness. Emily Grierson’s loneliness can be attributed to three main factors: her father, her secluded lifestyle, and Homer Barron’s rejection.

Don't use plagiarized sources. Get your custom essay on
“ ‘The Yellow Wallpaper” and “A Rose for Emily” ”
Get custom paper
NEW! smart matching with writer

It is a story of a woman who becomes insane by wallpaper in the room. After becoming mother of a child, she was diagnosed hysteria. The woman filled in her mind the yellow wallpaper and began to act deranged. The title, The Yellow Wallpaper, is well suited for this story as it plays a pivotal role in symbolizing what the woman deals with day & night; the wallpaper becomes a symbol for the reasons of her insanity.

William Faulkner’s “A Rose for Emily,” is about a woman who became insane by her father, who this condition kills her last suitor, Homer Baron. Emily was slowly driven into insanity by her father and other males throughout her life. Initially she was young and was a slender figure in white, contrasted with her father, who is described as a straddled silhouette. The Grierson house, was white, decorated with cupolas and spires and scrolled balconies, becomes a further representation of her diminished state, as she transitions toward insanity.

In its best times, the house was big, squarish and located on Jefferson’s most selected street. Viewing the house from this perspective gives the reader the impression that the house was not only very solid, but also larger than life, and gothic in nature.

Emily, a resident of that house, was also perceived in the same manner. However, Emily failed to maintain this image of strength as male figures, such as her father and Homer Baron caused her great embarrassment. After her father’s death, Emily was left without wealth, except for the house. After her father’s death she began to deteriorate, and looked like a girl with a vague resemblance to those angels in colored church windows – sort of tragic and serene, indicating her increasingly weakened image as a step towards insanity. The house also comes to reflect Emily’s decay as it obtains a stubborn and coquettish appearance. The inside of the house, which comes to represent Emily’s mental state, as well as her inner thoughts, also smelled of dust and disuse. (William Faulkner, 2003)

Much like Faulkner, Gillman uses the Gothic elements of the house in which the protagonist resides in order to mirror traits of her persona. Gillman used many Gothic elements in the story “The Yellow Wallpaper”. The residence that the husband rents for the summer as well as the immediate surroundings is presented right from the beginning of the story. It is a secluded located place three miles from the village; this location represents an isolated environment. Because it was a colonial mansion, it obtains a gothic style as if it is haunted by ghosts.

The haunted house contains a delicious garden, velvet meadows, old-fashioned flowers, and bushes and trees that come from broken green houses and overgrown roses suggest a dark green brown look. The garden has deep-shaded arbores, which are also gothic elements. The unclean yellow of the wallpaper is strangely faded by the slow-turning sunlight; it is a repellent, almost revolting yellow, and a dull yet lurid orange. The rings on the walls, the barred windows, and the nailed down bed all further support this dark atmosphere that persists in throughout story. (Howells, 1920)

Additionally, these elements are used to represent and symbolize the character’s mental condition as she is undergoing this ill-treatment by her husband. Jane becomes obsessed with the yellow wallpaper that is present in her room. It becomes a reflection of her mental state, becoming more complex and twisted as her condition worsens. “This paper looks to me as if it knew what a vicious influence it had…the pattern lolls like a broken neck and two bulbous eyes stare at you upside down,” in which Jane could be talking about herself, her influence and strength that is not seen and suppressed making it look like a hideous creature. Furthermore we see a reoccurring gothic image of broken necks and hanging heads, common in people who are hung. These Images of hanging people, which could indicated suicidal tendencies in Jane come up more often as her condition worsens. “They suddenly commit suicide-plunge off at outrageous angles, destroy themselves.”

Miss Emily is so lonely is because of Homer Barron’s rejection. When Homer Barron, a construction company foreman, enters the scene, the townspeople notice that he and Emily begin spending a great amount of time together. They say things such as “She will marry him”, “They are married”, and “She will persuade him yet”. Although Homer is said to homosexual, Emily hopes that this will one day be the man to end her loneliness. She is found to have bought men’s clothing and also toiletries with the initials H.B. on them. However, Homer’s attraction to men makes Emily jealous, and he says in his own words that he is not a marrying man.

At this, Emily begins to fear rejection and a complete lifetime of loneliness. When this is realized, Emily begins to crumble, and in a fit of both passion and insanity, Emily poisons Homer Barron, and keeps his body so that he will be hers forever. For forty years, Homer Barron’s corpse lies on a bed in an upstairs room. The body is positioned in an “attitude of an embrace”(171), and there is said to be “a long strand of iron-gray hair” on the pillow beside him. Therefore, after she murdered Homer, Emily would lie beside him, and in an insane way, she would relieve a portion of her loneliness. (Birk, 1997)

Another gothic and mythical element used to depict the insanity of the protagonist is the image of creeping women behind the walls and in the gardens of the house. These creeping women who are seen by Jane are all images of her multiple selves as she sees them everywhere. She even comes to tell us that she creeps by daylight and that she locks the doors when she does so As her condition worsens the suppressed personalities that lurked within the protagonist’s subconscious become stronger and appear more as The front pattern does move-and no wonder! The woman behind shakes it. In daytime when she is watched and people are around her and she feels in place with society in the very bright spots she keeps still, but in secret as her condition gets stronger, in the very shady spots she just takes hold of the bars and shakes them hard…she is all the time trying to climb through.

The assumption does not help her sickness, in fact, Jane; the narrator believes that it’s the reason why she cannot get better. But it is pointless for her to argue, since her brother; also a physician of high standings affirms the diagnosis. She is not allowed to have her opinion; it is dismissed as soon as it is said. She feels guilty to even think her husband is wrong about her sickness, as she take pains to control myself – before him at least, and that makes me very tired. Jane has her opinions, but to no avail, she has to take her husband’s orders. (Gilbert & Susan, 1979)

The changes between day and night times, add to the mysterious setting in which Jane is placed in. The final, strongest personality starts to isolate itself within her as that personality “gets out in the daytime”. In the final night before they leave the final transition takes place the new personality surfaces, “I’ve got out at last,” and goes on to refer to the husband and the old personality as “you and Jane,” referring to her old self in the third person as she is now a new and transformed personality that cant be put back, and she goes on creeping and crawling around the room.

Emily, like Jane, reflected the house itself. In “The yellow Wallpaper,” Jane’s deterioration is described in much more detail in comparison to the other two pieces. When comparing “The Yellow Wallpaper” with “A Rose for Emily”, we find that both Emily Grierson and Jane are forced into solitude by the control the males have over them. Emily’s father rejects all of her potential husbands; Jane’s husband isolates her from any possible stimulation. Emily is a recluse ensnared in a condemned home, and Jane is a delusional woman trapped in a mental ward. Ultimately, when considering the different styles of these authors, and the different themes of these stories, it is interesting to see how the usage of gothic elements in describing the houses is used to personify the characters.

In conclusion, Emily Grierson suffered a harsh and lonely life. Her father’s refusal to allow suitors was inconsiderate and selfish. She was left with only him, and after his death, she was alone. She had no one to turn to, and if she hadn’t been a pauper, she would have been out on the street. Her decisions to exclude herself from the town and to keep her life private and mysterious did not help her state of loneliness, but made things worse. She was setting herself up for a complete lifetime of solitude.

At the recognition that Homer Barron would not marry her, she became mad with rage. It was her last chance to end her isolation and to find a man to love her. At this rejection, Emily Grierson took Homer’s life, and kept his body locked away for her pleasure. Her lifetime of loneliness had finally caught up to her, and she had become insane because of the pain and grief which had become such a tremendous burden in her life.

The Yellow Wallpaper is written at a time when women’s health issues were not important. Men used their theories to form medical groups. It was not the time for women, all the men expect that the women will live under their control and obey their orders. In this story the women tried to take control over their husbands and struggle for their freedom.

'The Yellow Wallpaper" and "A Rose for Emily". (2016, Jul 27). Retrieved from https://studymoose.com/the-yellow-wallpaper-and-a-rose-for-emily-essay 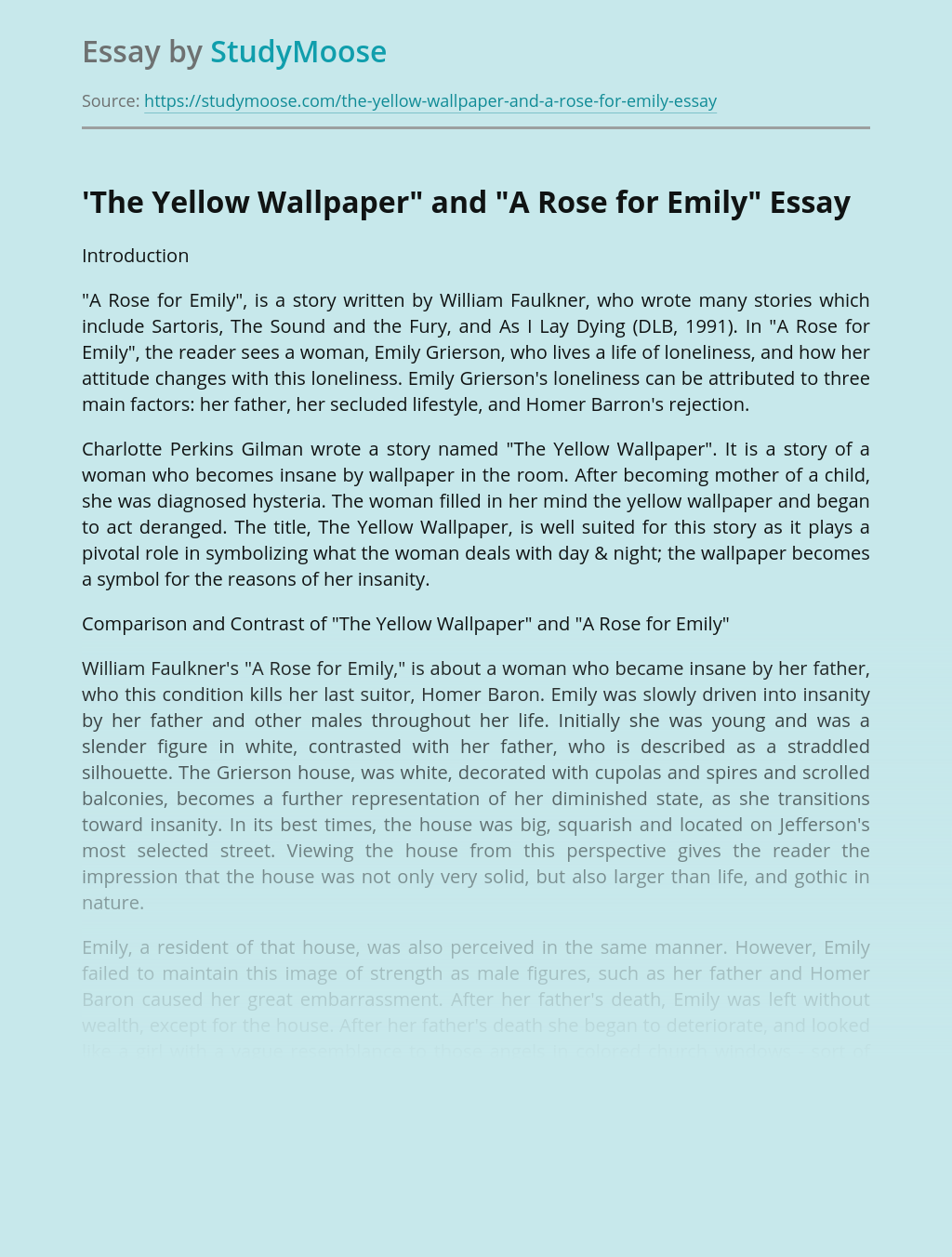