Symbolism and Allegory in “The Yellow Wallpaper”

The “rest cure” (Gilman, 1913, 1) was not always the right prescription. Charlotte Perkins Gilman wanted to communicate that with her readers of the controversial short story, “The Yellow Wallpaper” (1899). Many physicians claimed her story drove people mad and protested her depiction of how physicians gave wrong treatment to people with mental illness. The Yellow Wallpaper may have been a shocking story for many but it was not meant to drive people crazy. Instead, it was meant to save people from being driven crazy (Gilman, 1913).

Don't use plagiarized sources. Get your custom essay on
“ Symbolism and Allegory in “The Yellow Wallpaper” ”
Get custom paper
NEW! smart matching with writer

Varying interpretations may emerge from this striking story, but Gilman was right. It is up for the readers to decide whether her story benefited their lives or not. What is important to be understood is: people need people. In times of trouble, they need to stay connected with their loved ones and be assured of their support. That will give them strength to fight their problems and prevent them from drowning further into their troubles. The story “The Yellow Wallpaper” (1899) is a classic American short story written by Charlotte Perkins Gilman.

It was written during the era when feminism was starting to unfold. It also provoked the awareness to women’s rights. The feminists were provided a welcome support for their claims and positions. Gilman’s time was also the time of Jane Austen, Mary Shelley, Florence Nightingale: women who used their abilities to write to express the sentiments of women who succumbed to gender discrimination for centuries (Nightingale, 1992). The story was also influenced by the Gothic genre when the focus was on the individual mind, how it can create horror, fear and reveal secrets of the self (Sedgwick, 1980).

The release of the story in 1899 troubled various sectors of the society, especially the physicians who felt insulted by the criticisms on their “rest cure” prescriptions. But despite protests, arguments and criticisms, the story remains a classic literary masterpiece, teeming with symbolisms and allegory. It brings every reader to a different world as an unnamed narrator relays her life and her battle fighting a worsening mental illness. Symbolisms and Allegories on Feminism

“Women had the potential of men and none of opportunities” was Florence Nightingale’s popular statement that gave the boost to the 19th century feminist revolution (Nightingale, 1992). Gilman supported the women’s plight expressing strong symbols and allegories of feminism in her story. Somehow, though feminism was not mentioned as being part of why the story was written (Gilman, 1913), the relationship of the characters showed evidences of suppression on freedom and rights of women.

The narrator is a typical female character in the 18th and 19th centuries: pious, loving and fully obedient especially to the husband (Women in 1900, 2008). The narrator (unnamed), the protagonist of the story, was diagnosed with “temporary nervous depression – slight hysterical tendency” (Gilman, 1899, 1), and was advised by her physician (her husband John), to take a “rest cure” (Gilman 1913, 1). That meant the narrator and her husband would spend three months living in a remote villa with very limited people visiting and taking fresh air, peace, quiet and plenty of rest.

At the sight of the villa they were set to live in for three months, the narrator reacted that she did not like it, expressing that it was eerie and haunted. “John laughs at me, of course, but one expects that in marriage”(Gilman, 1899, 1). The statement was open to many meanings. The couple was going to live in a remote mansion for three months; the wife expressed she did not feel good about the place, and she was laughed at. The vacation was also intended to make the wife get better but her feelings about the place were ignored. That represented a clear discrimination of a wife’s rights to make decisions in marriage.

It showed how husbands made decisions without considering the needs and views of the wives. It was an old enduring cultural practice and the narrator knew that her appeals would be in vain. It was no wonder that the narrator made many similar comments expressing her resentments for being deprived but realizing that she could not do anything about it. “He is very careful and loving, and hardly lets me stir without special direction” (Gilman, 1899, 1). That was an allegory (Todorov, 1984, 205) expressing helplessness for being deprived of freedom.

“It is so hard to talk with John about my case, because he is so wise, and because he loves me so”(Gilman, 1899, 5). This is another allegorical remark where she possibly convinces herself that even if her husband does not recognize her being a partner in a relationship, his decision was always intended for her betterment. Even if he refuses to listen to her, he loves her and he knows better, especially because he is a doctor. Symbolisms and Allegories on Mental Illness The symbolisms on the narrators eroding mental condition were very striking.

The word “yellow” was made to represent something dull and unpleasant. She even described yellow not just as an unpleasant color but as a distasteful smell (Gilman, 1899, 8), so that the reader can imagine how yellow could look and smell so bad. The yellow wallpaper tortured the mind of the narrator that she became obsessed to strip it off the wall. As she advanced in her efforts, she sees various forms and creatures that drove her deep down into her mental illness. She saw formations of creeping women, fungi, toadstools, walloping seaweeds and even bars on the wall (Gilman, 1899, 6).

The creeping women could represent the struggles of women like her to gain importance in the society. The fungi, toadstools and seaweeds that create the maze in the walls are the society’s justifications for the treatment given to women like her. The society tolerates and even supports male domination and female submission that is why women are confused. They feel like they are in a maze, not understanding their positions in the society and in the family, and whether being humans, they are in equal levels with men. The bars represent the hindrances, the blockages to all the things women want to do in their lives.

They could not say “no” because they are supposed to be fully obedient to their parents and especially to their husbands. From birth, they were reared to become respectable women; which meant, they behave like other women in the community: prim, proper, pious and obedient. The sights on the walls: the torn wallpaper in every corner of the bedroom proved the narrator’s deepening melancholy. These also showed her suppressed resentment for being ignored and without the power to do anything about it. The narrator loathed all that was in the bedroom.

She hated even the bed which she believed was chained to the floor because it was immovable (Gilman, 1899, 9). The bed could have given her the opportunity to connect with the husband and feel the love and support. For her, the bed was chained. The allegory could mean that even at night in the arms of her husband, she felt no connection. It could also mean that the husband, who is a doctor and a busy man, did not talk, caress or even touch her. For married couples, the bed is the most intimate place that husband and wife can connect. It is where they can do their private expressions which they cannot usually do anywhere else.

It could have been a chance for John to show how he really loved his wife even if he is away most of the time. Although John unquestionably loved his wife, the male supremacy that the society built on him throughout his life, made him forget many things. That included his wife’s need for his compassion and passion when they are in bed. The narrator longed for that chance to connect but the bed was empty and immovable. Because of that, she drifted her attention to the wall and even if she loathed it, she accepted that it was the only thing that really communicated with her.

“And I’ve pulled off most of the paper, so you can’t put me back! ” (Gilman, 1899, 12) The narrator said that when the she was caught by her husband in the act, creeping and stripping the yellow wall paper, her illness already enveloping her. She so eagerly tore the wall paper, like she removed all the barriers to her life. Because she was so powerless in real life, she was powerful in her ailing mind. She was able to remove the maze, the fungi, the toadstools, the seaweeds so that the creeping women could be free; so that she could free herself.

The saddening part was, because she was stronger and happier in her other world, she found it more difficult to go back to reality. Who then is to blame for the narrator’s predicament? John and the other characters in the story may have made mistakes in providing care for the narrator but they truly loved her and wanted her to get well. They just did not know how and what kind of care they should have given considering her sensitive mental condition. It was the 19th century and men were brought up to dominate women in almost all aspects and women were raised to be submissive and obedient.

It was the 19th century and science and technology did not have the DSM IV and various cognitive and behavioral therapies for depression (Psychology Information Online, 2008) and other medicines that are now proven effective in treating mental illnesses. The narrator was just a victim of her times. People need people. She needed her husband and her family to stay with her especially when she became mentally ill. She needed them to stay connected, give her their love and assure her that they will be there. That would have given her the strength to hold on, to fight her illness and prevent her from drowning further into her mental illness.

Symbolism and Allegory in “The Yellow Wallpaper”. (2016, Sep 24). Retrieved from https://studymoose.com/symbolism-and-allegory-in-the-yellow-wallpaper-essay 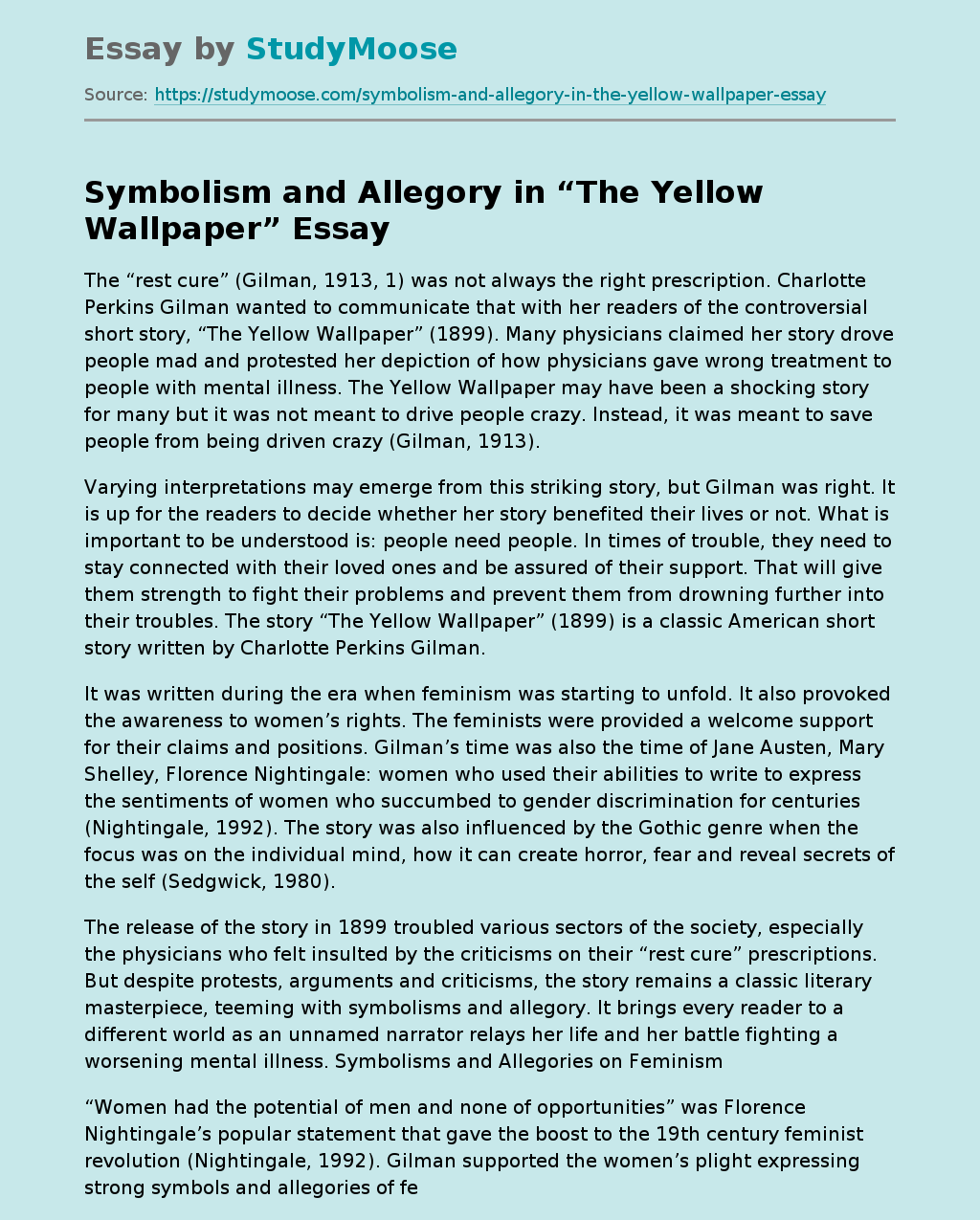