Symbolism In The Gothic Setting of “The Yellow Wallpaper” Gothic literature is incredibly distinct. There is a sort of formula involved with writing in the Gothic style, and one of the most important aspects of this is the setting, which can include anything from the architecture of the buildings to the color of the leaves on the trees. The setting of a story is a vital element, as it would seem to be that the most effective way of drawing someone into the story would be allowing them to envision it, and it’s much easier to envision something once it has been described.

Turn in your highest-quality paper
Get a qualified writer to help you with
“ Symbolism of the Setting of “The Yellow Wallpaper” by Charlotte Perkins Gilman ”
Get high-quality paper
NEW! AI matching with writer

Gilman makes the style of her story very clear from right from the first page. The building the narrator describes is a “colonial mansion… a haunted house” (Gilman 83), which is very typical of Gothic literature. Gothic buildings tend to be castles and are often old, decrepit, or haunted. This house is “an Americanized, domesticated format of the physically charged contested castle” (Carol Davison). The grand colonial mansion on a large block of land resembles a more modern castle, which provides the feeling that the house is looming, stuffy, and, for lack of a better term, creepy.

Though the narrator does say that the house is not actually haunted, she does state that “there is something strange about the house” (Gilman 84). This lets the reader know that this story will have strange elements to it, which is normal of Gothic literature.

The protagonist doesn’t walk about the house too much, as she stays in solitude in her room for most of the story, but when she does, “[her] exploration, often at night, of the apparently haunted Castle’s maze-like interior involves confrontation with mysteries whose ultimate unravelling signifies a self-discovery” (Carol Davison). As she becomes less and less imprisoned in the house and more involved with the wallpaper, she finds a sense of freedom. The setting is most clearly shown to be that of Gothic literature through the furniture in the house that the protagonist is staying in. Many things about the room that the protagonist is staying in represent imprisonment , which is a common theme in Gothic literature. Gilman states that “the windows are barred” (84), which immediately gives the reader an idea of not being able to escape. The bed in the room “is nailed down” (Gilman 88), which is also apart of the idea of prison.

The unmovable bed foreshadows the solitude of the protagonist, as she becomes consumed by the wallpaper and does not leave the bedroom. Each item of furniture in the room is used to symbolize something, as “the bars on the window suggest the trapped nature of female gender roles. The window symbolizes freedom” (Conrad Shumaker). Along with this, the rooms is described to have “rings and things in the walls” (Gilman 84). Though there are a few different reasons why there would be rings, one of them could be that the room used to be a sort of prison or torture chamber, which would mean the rings were used for chains of sorts. This explanation would fit in with the idea that the room that the protagonist occupies becomes a prison for her. Along with the theme of imprisonment, much of the setting and it’s description symbolizes the isolation that the protagonist faces. When stating the location of the house, it is described as “quite alone… quite three miles from the village” (Gilman 83). This is how isolation is first introduced, and it is quite literal. Much of this theme of imprisonment is included to represent female oppression.

Of course, the biggest element of the setting of “The Yellow Wallpaper” is, in fact, the yellow wallpaper. The narrator states that she “never saw a worse paper in [her] life” (Gilman 84). The in-depth description of the paper tells the reader how horrible it is to the protagonist. Her way of describing it makes it almost more eerie than ugly, as she says “when you follow the lame uncertain curves for a little distance they suddenly commit suicide” (Gilman 85). The protagonist of this story is sick, most likely mentally ill, but her husband, who is also her doctor, refuses to believe that the sickness is anything but physical. This little nod in the wording toward a mental illness ties the wallpaper into her sickness. K.V. Rama Rao observes that her description is “almost like a metaphysical conceit obliquely suggestive of the condition of women.

These are not words normally used to describe wallpaper.” The paper is clearly symbolic of many different things. It is one of the many things that leads back to Gilman’s stance as a feminist. In the story, “the narrator represents male fears about femininity and female sexuality. [Female sexuality is] represented by the color yellow and the smell of the wallpaper” (Mary Jacobus). As the story continues, the paper “becomes a phantasmagoria screen onto which is projected her sense of her situation” (Carol Davison). The protagonist thinks of it as a living being, as it has an effect on her and “looks at [her] as if it knew what a vicious influence it had” (Gilman 86). The protagonist also begins to see a person in the wallpaper, and she is “quite sure it is a woman” (Gilam 92). The paper takes over her life, as does the woman she sees in the paper.

This obsession is because of her being isolated in the bedroom, which ties back to the entire room being a prison for the narrator. In further description of the paper, it is described that “at night in any kind of light…it becomes bars…and the woman behind it is as plain as can be” (Gilman 92). As we can see, the paper is being used to symbolize imprisonment, and “these words are a clear statement of the author about women – the woman is behind the bars built by society!” (Rama). The author makes a clever move in her descriptions by touching on a few different topics in her symbolism. Not only does she include the theme of imprisonment to show the effects of isolation on mental patients, but also to suggest the importance of gender equality, as women are imprisoned by the roles society places them into.

Symbolism of the Setting of "The Yellow Wallpaper" by Charlotte Perkins Gilman. (2016, Mar 21). Retrieved from https://studymoose.com/symbolism-of-the-setting-of-the-yellow-wallpaper-by-charlotte-perkins-gilman-essay 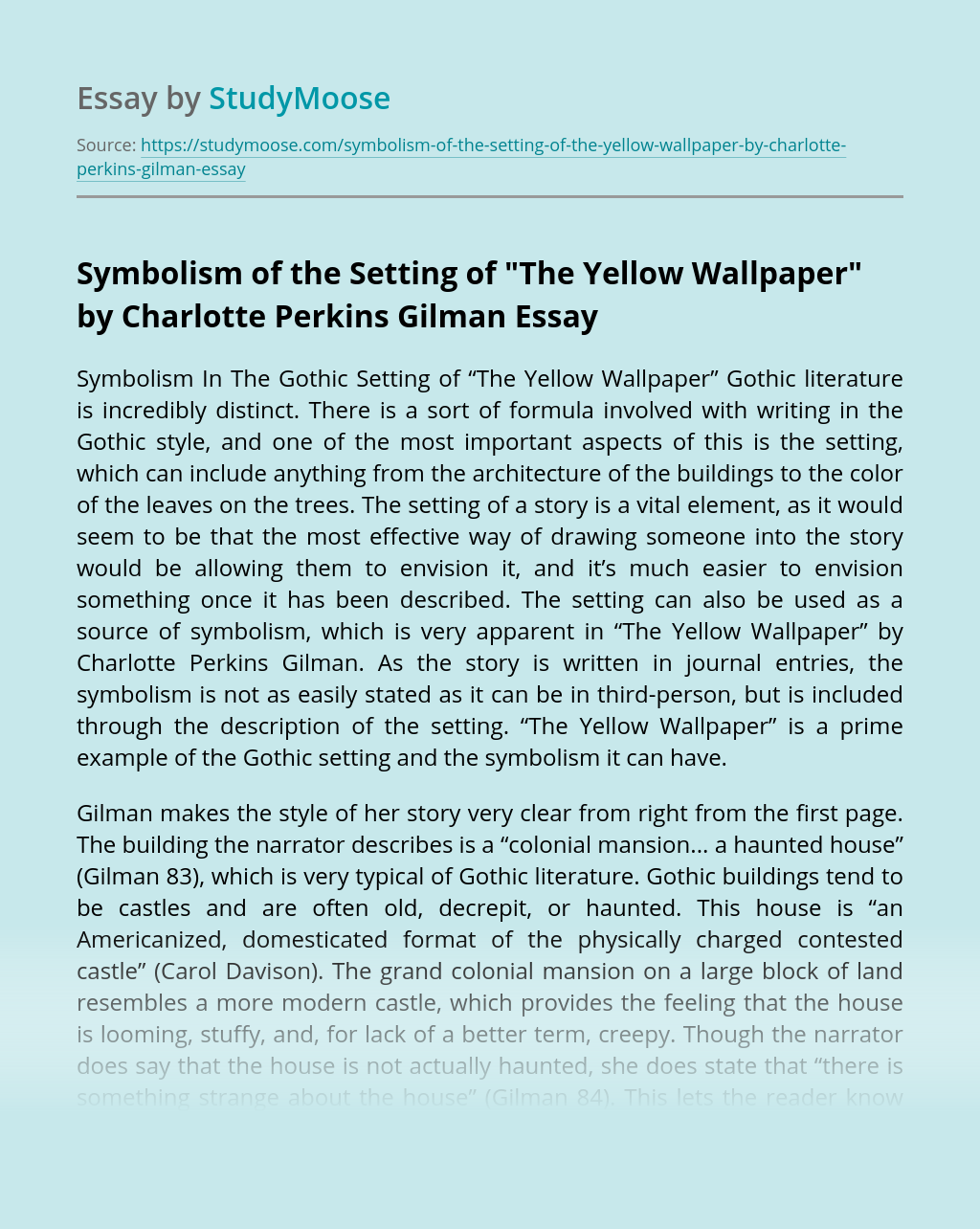 Turn in your highest-quality paper
Get a qualified writer to help you with
“ Symbolism of the Setting of “The Yellow Wallpaper” by Charlotte Perkins Gilman ”
Get high-quality paper
Helping students since 2015
Stay Safe, Stay Original