Symbolism in "The Yellow Wallpaper"

At first glance, Gilman’s short story,”The Yellow Wallpaper,” is a very strange story.  The story is based on a woman who eventually becomes taken over by the yellow wallpaper in her room, even to where she eventually is driven insane.  Although the story only tells you the main details, the wallpaper is so much more than just a terrible decoration choice. When annotated, the wallpaper is made out to be a symbol of all the terrible things that are to come.

Don't use plagiarized sources. Get your custom essay on
“ Symbolism in “The Yellow Wallpaper” ”
Get custom paper
NEW! smart matching with writer

The room at the top of the house was not just a room, but a place that caused the unfortunate woman to become crazy. Everything that the wallpaper represents take the story deeper and allow the reader to actually understand the woman’s situation.

While reading the story, the reader learns that this story is told through a diary the woman used to vent.  After being left alone in that awful room, the woman is very bored and lonely, so she decides to write in it.

Proficient in: The Yellow Wallpaper

At the beginning of the story, the woman is prescribed a “cure” for her “problems.” The woman’s husband wanted to make sure that his wife only rested and did nothing else because he thought would involve brainpower.  It might not seem like it at first, but the diary is much more than just a collection of thoughts. Because the woman kept the journal, it symbolizes how she will not let the wallpaper and her husband control her life.  It was a symbol of rebellion.

However, despite how much the woman tried, she still let the wallpaper take over her, and the reader watches her become more and more insane.  This is symbolized by using the room that the poor woman has been staying in this whole time. In the story, the reader receives an in-depth image of the terrible room.  There are scratches on the walls, splinters in the floor, and the wall has an awful odor that she can barely stand. As a result, the condition of the room and the wallpaper is a symbol for the woman’s mental health.  It’s slowly but surely deteriorating.

Another thing that the wallpapers symbolizes is it’s pattern. It’s bad enough that the wallpaper was smelly and peeling, put it also had a crazy pattern that made the woman go even more insane.  Whenever the woman tries to follow the horrific pattern, it always ends abruptly and starts up somewhere else. The terrible pattern of the yellow wallpaper symbolizes the patterns of society responsible for women’s repression.  This story was written in a time where women did not have a say in anything. The patriarchy was a powerful societal pattern, that was almost impossible to break through. Just like the reader sees in this short story, the women are given a “rest cure” which in reality, might only make things worse.  While they are resting, they are led to believe that they are not supposed to engage in any activities other than resting whatsoever. These social patterns cannot be escaped, much like the yellow wallpaper. When the narrator looks upon the wallpaper, she gets very angry because it is always there to greet her everyday and never goes away.  Her frustration with the wallpaper represents women’s frustration with patriarchal society as a whole.

One obvious symbols is how the room reminds the reader of a prison.  Almost everything resembles a prison from the bars on the windows to the gate at the top of the stairs.  Even though she is not in an actual prison, the way the woman is being treated shows how the yellow wallpaper has trapped her in her own mind.The women’s room was located at the very top of the house so she wouldn’t be disturbed by guests. Even though she was not supposed to, she used her isolated room as a quiet place to write.  Using this information, it is obvious that the woman sees the room a safe-haven. As the story gets closer to the end, she locks herself in the room and creates diversions just so she can attempt to finish peeling off the yellow wallpaper.  She feels safe by locking herself in and everyone else out, even though she has already gone completely insane. The final symbol represented by the yellow wallpaper is sin.  Towards the beginning of the story, when the narrator still has her sanity, she talks about how the shade of yellow was ugly and a ‘sin” to fashion.

Later on in the story, she begins going insane because of the wallpaper and its thoroughness. If the reader was to imagine the wallpaper as a real person, that person would be considered evil. In conclusion, the yellow wallpaper in the story uses metaphors to symbolize all of the negative aspects of the woman’s life at this time.

Symbolism in "The Yellow Wallpaper". (2021, Mar 22). Retrieved from https://studymoose.com/symbolism-in-the-yellow-wallpaper-essay 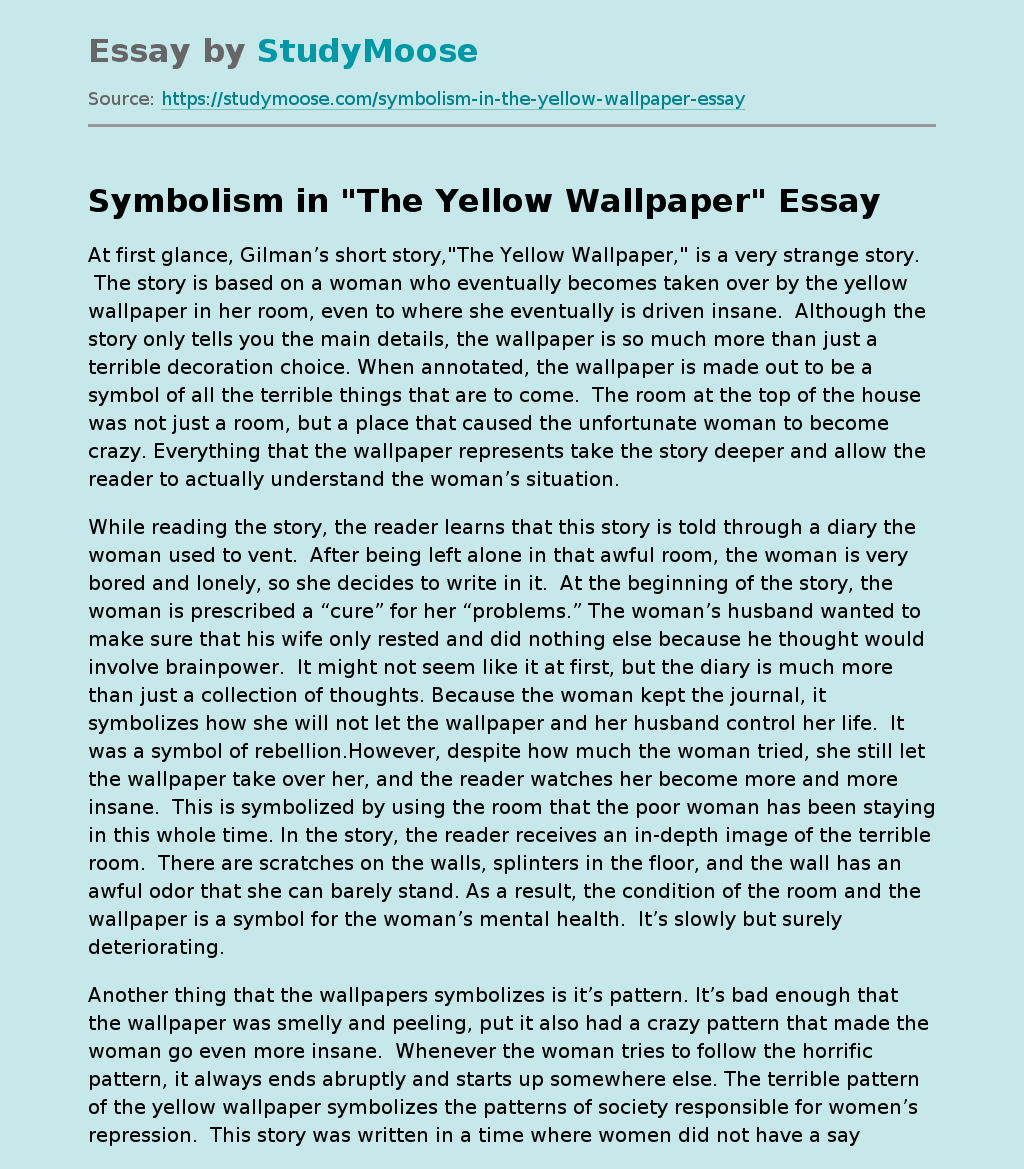