Comparison of Short Stories "The Yellow Wallpaper" and "The Awakening"

Gilman’s ‘the Yellow wallpaper’ and Chopin’s ‘the Awakening’ both challenge gender roles which are socially forced in those days and the illusion that men think they are superior to women through symbolism, imagery and allegory. Gilman uses symbols to show her antipathy to the old, unpleasant system and to demand change, while Chopin claims that women are not men’s property anymore by showing a woman who is free from all the constraints imposed by society. They deal with the awakening of an ego oppressed by a man in the novel.

Don't use plagiarized sources. Get your custom essay on
“ Comparison of Short Stories “The Yellow Wallpaper” and “The Awakening” ”
Get custom paper
NEW! smart matching with writer

But it is Gilman if either one says it’s more effective. She focus on the life of a woman who have to live passively and the challenge of a woman, but Chopin’s portrayal of the protagonist’s explicit sex and the ending of her irresponsible behavior leaves much to be desired.

In the Yellow Wallpaper, John and her brother mean the privileged class at that time.

As if they make her comfort, but it makes the narrator a passive figure who can’t do anything while just telling the narrator to rest. The narrator, who can no longer serve as a maid, mother and wife, is treated no matter what demands are made on them, the narrator is easily ignored and isolated. On the other hand, Jenni, who appears in the novel, only does steadily what is given and doesn’t want or express her opinion. “She is a perfect, an enthusiastic housekeeper, and hopes for no better profession”(136).

She is the image of a woman at that time that men want and she is absolutely obedient to men’s words and no longer wants or wishes. She is a passive woman that society wants.

Then, what is the female image of ‘the Awakening’ like? Chopin depicts Edna’s life in the novel not much different from the Yellow wallpaper. “They were women who idolized their children, worshiped their husbands, and esteemed it a holy privilege to efface themselves as individuals and grow wings as ministering angels”(12). The protagonist, Edna, is forced and expected to remain as her husband’s wife, her children’s mother and an angel of the family. The life without freedom given to Edna and ‘I’ is created and controlled by men.

Kate Chopin gives Edna a chance to awake from this pressure. “The voice of the sea speaks to the soul. The touch of the sea is sensuous, enfolding the body in its soft, close embrace”(18). She swims with her arms and legs in the sea where she could die, feeling free. This point tells us how much pressure and pain a woman’s life feel within the framework of a woman’s role created by men. Chopin uses the symbol ‘Ocean’ to suggest to the reader that although it is a dangerous place, it can be overcome and awaken.

The yellow and smelly wallpaper and an unusual patterns like a woman mean an old and unequal system and a woman is oppress by it.The male-dominated society and patriarchal system of social acquiescence are rampant and these are grievance and pressure for the narrator. “I never saw a worse paper in my life. One of those sprawling ﬂamboyant patterns committing every artistic sin”(133). The narrator in the novel is very uncomfortable and upset when the narrator see the wallpaper. It is certainly an expression of antipathy toward an old and unpleasant system. She thinks it should change and asks for it. But rather, her husband and brother laugh at her demands and says there are no problems. “He laughs at me so about this wall paper! At ﬁrst he meant to re paper the room, but afterwards he said that I was letting it get the better of me, and that nothing was worse for a nervous patient than to give way to such fancies”(134). They are feeling comfortable in a system that have already been made and they could not find any problems. Her demand of changes and reforms were inconvenient and problematic for them.

Edna in Kate’s novel also wants to get out of this male-dominated society. She does not wish her life being wasted as a mother and wife. “Edna had once told Madame Ratignolle that she would never sacrifice herself for her children, or for any one”(52). Gradually separating herself from her children, her husband, and someone’s lover, she conflicts with herself in self-divisions and contradictions in order to be reborn as the new. But even this inner conflicts are uncomfortable for her husband. “He reproached his wife with her inattention, her habitual neglect of the children. If it was not a mother’s place to look after children, whose on earth was it?'(10). All he wanted is a woman who society wants and accepts, but she becomes a woman who is moving away and going astray from the system. It is about the harsh life given to women. Women in the 19th century were not educated, had limited hobbies and even could not ride bicycles. Naturally, even imagining these problems was taboo for women. Chopin shows these problems to reader and she causes them to keep asking and thinking. What’s the problem? How can we solve this?

She shows that to solve this problem, women also need an independent space that is free from men, and that women are no longer male possessions. “She liked then to wander alone into strange and unfamiliar places. She discovered many a sunny, sleepy corner, fashioned to dream in. And she found it good to dream and to be alone and unmolested”(63). A woman can choose her own life, choose her own mind, and speak out, no longer a thing that can be transferred or given up by their husbands. One human being is not simply referred to as a man, but equally distinguished as a man and a woman. And no longer oppressed by male-made constraints, free from them

Gilman presents a different method from Chopin. They say they should move voluntarily and change their male-dominated lives. John, who can see what the real narrator is, ignores her, eventually facing the pattern on the wall. And by equating herself with the pattern, the real ego of a woman who has been suppressed by gender roles become increasingly concrete. “I see her on that long road under the trees, creeping along, and when a carriage comes she hides under the blackberry vines. I don’t blame her a bit. It must be very humiliating to be caught creeping by daylight! I always lock the door when I creep by daylight. I can’t do it at night, for I know John would suspect something at once”(143-144). Especially when describing a woman crawling, ‘I’ is referred to a crawling woman as ‘She’ but later the pronoun is changed to ‘I’. Then she tear off the wallpaper and starts crawling around like a woman in the wallpaper. She becomes a crawling woman. Her crawling behavior is only seen as irrational by those who thought ‘I am normal’ tamed by the system.

The narrator who is looked as if she acts strangely by ‘normal’ people finally cries out. “I’ve got at last!”(147). She escapes from that old, unpleasant wallpaper with a woman in the wallpaper and is freed from the society that oppressed and ignored her. The author shows that her crawling is not stained by any custom and system like an infant, and makes her reborn as a pure self and being. It is her first time to have her own voice and self-determination.

Chopin’s ‘the Awakening’ also gives Edna the right to make decisions and gives her a new ego as a woman. But her novel might have been more effective if she had shown more detailed descriptions of the feelings Edna felt, Edna’s values as a woman and what Edna was conscious of in another life. “He did not answer, except to continue to caress her. He did not say good night until she had become supple to his gentle, seductive entreaties”(98). Chopin makes Edna find a solution of the awakening of self through sexual desire. However, the portrayal of sex was so explicit and sensational that it was harshly criticized by many critics. Because of her poor portrayal, Edna’s sexual awakening is only seen as a small deviation. It’s a pity that she doesn’t show more positive and advanced awakening like swimming in the ocean.

To add to the ending, Chopin would have wanted to give a lot of meaning through the disappearance (suicide) from the sea, but it wasn’t delivered enough to the reader and rather raises many questions. Edna ,who was not happy to live in the exisitent system, would have pioneered new field of her own. If rather external awakening than inner one makes her success in her life and be perfectly independent from the society made by men. It would be better feminism novel than now. Chopin could have chosen one of the infinite ends, but it’s too bad she locked up Edna’s life in the limitation again.

Gilman and Chopin face to and bump into the constraints and inequalities of gender roles they felt in their lives with great and pioneered literary challenges. They feel freedom as they liberate the protagonists from unfair and restrained society. Gilman shows the narrator’s change to the husband, brother who are the privileged class of the old system, and to her sister-in-law, who is tamed into the system. She encourages women who fight with fear and terror of suppression and it may seem crazy to others, but she has shown that if women think and act on a gender roles, women can break the bad habit. Likewise, Chopin shows freedom from the rule of male through the awakening of Edna, which made people agonize over thoughts and values they have had. But I think it could have been more impactful and effective than Gilman’s novel if she had created events that more people could relate to than Edna’s excessive sexual awakening and the miserable ending and if Edna demands and challenges the true equality of gender roles as a more responsible act in the novel.

Comparison of Short Stories "The Yellow Wallpaper" and "The Awakening". (2021, Feb 08). Retrieved from https://studymoose.com/comparison-of-short-stories-the-yellow-wallpaper-and-the-awakening-essay 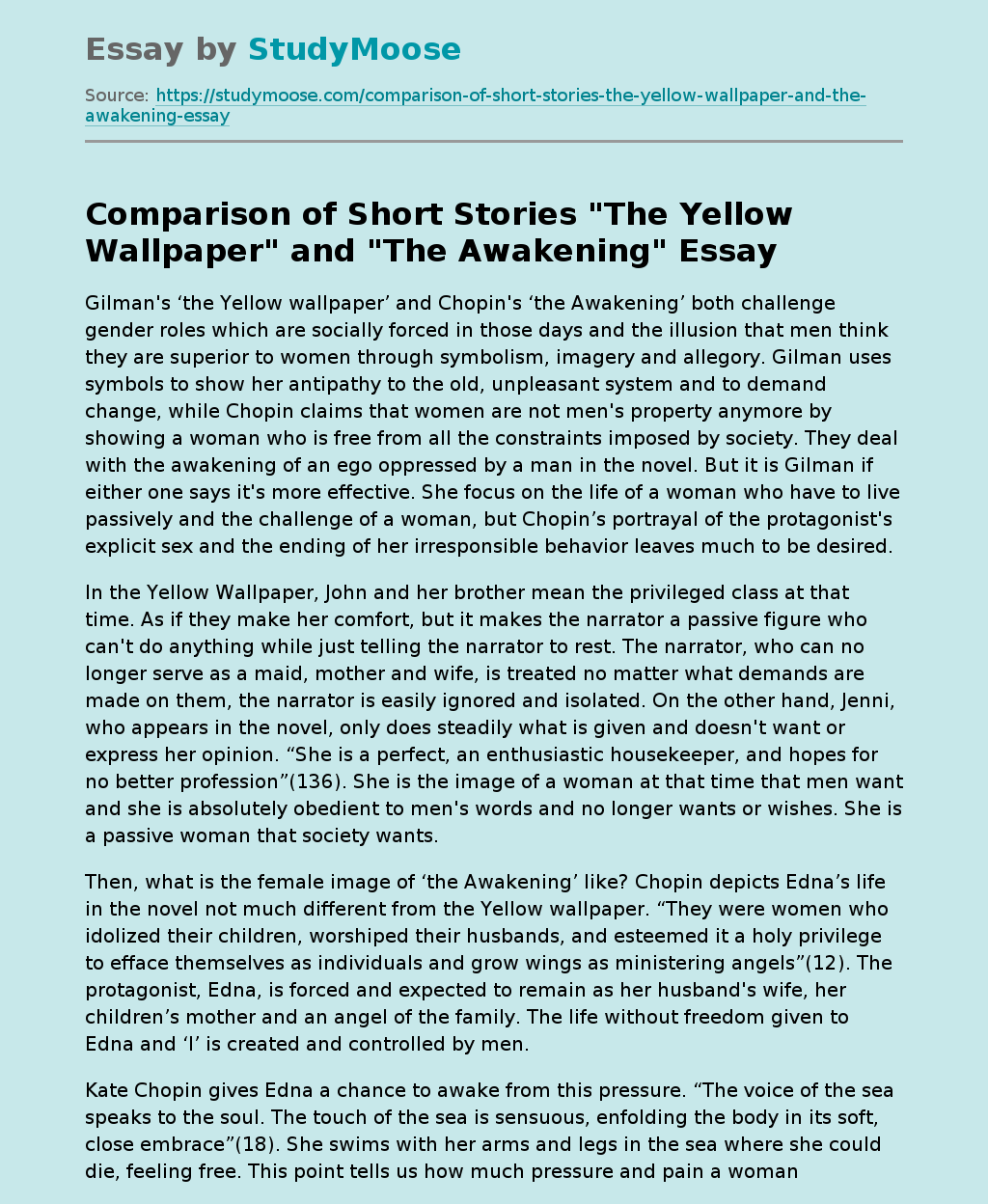