Reasons of Emily's Tragic Fate in A Rose for Emily

In William Faulkner’s novel, “A Rose for Emily” Emily is the title character who is depicted as disillusioned with society, totally withdrawn, and a bit odd and outlandish at times.

From what we can tell, she never actually receives any type of treatment for her mental health, but she consistently exhibits numerous systems that might be diagnosed as a psychiatric issue.

Through an analysis of Emily’s behavior and her relationships socially, it is evident that she has some type of mental health-related ailment.

Don't use plagiarized sources. Get your custom essay on
“ Reasons of Emily’s Tragic Fate in A Rose for Emily ”
Get custom paper
NEW! smart matching with writer

It seems puzzling to the reader initially because the clues given through the text are very subtle, but as the story moves on, the pieces begin to come together. Even though society never labels her as being crazy, they do see her as a recluse. However, they are not aware of the realities she is facing internally, as she is clearly not well.

It seems like a paradigm as one begins the story, causing them to question and doubt if something that serious could really be wrong.

By the end of the narrative, “the reader can go backtrack through the story and identify numerous episodes in which Miss Emily’s character and behavior hinted at the possibility of mental illness, even if the town wanted to deny this fact and leave her intact as a social idol” (Smith 2011). Though, without a doctor’s official medical opinion, the information depicted could be utilized to justify the assertion that Miss Emily may have suffered from a type of Schizophrenia.

Diagnosing any type of psychosis often a daunting task, and one that denotes an immense amount of responsibility, and doctors are one’s trained to shoulder that responsibility. This is because they are the ones who assess the patient and conclude the diagnosis, according to the official “American Psychiatric Association’s DSM-IV” criteria.“One could justify and propose that Miss Emily developed this mental condition as a direct reaction to the demanding conditions in which she lived as a Southern woman from an aristocratic family” (Smith 2011).

Miss Emily’s mental health began to dissipate because she could not utilize the coping and defense mechanisms, one being that of adaptation. While a healthy individual could normally handle these types of triggers and stressors, those who are unable to suffer a variety of psychotic symptoms in reaction to their stimulus, and in Emily’s case, it was the situation she was living in. In the situation involving Miss Emily, “an analysis of the setting and the other characters in the story, as well as an examination of some of the themes and occurrences involving Miss Emily’s father” (Smith 2011). This enables a reader to comprehend the specific pressures that Emily could not cope with, therefore leading to a break in her mental stability.

Miss Emily originated within a family of great wealth and prestige from a small community in the south. Miss Emily had lived her life oppressed by the demanding expectations that her family and community had for her. They felt she owed it due to her “hereditary obligation’ (Faulkner Year) to uphold chosen traditions, ones that had been instilled generations before she was born. It was her father who was chosen as the solidified person to teach these values to her and he was intransigent in the reinforcement of them.

Miss Emily Grierson, the principal character in Faulkner’s narrative is undoubtedly bizarre. It is nearly difficult not to analyze her in a psychological manner as well as a textual one. Throughout the story, Miss Emily’s unpredictable and erratic actions become eccentric, and the community is left dumbfounded about how to justify the realization that she has been living and resting with a dead person; Homer Barron. The narrator of the story exclaims that the people in town never stated she was mentally unstable, at least, at first, and she never gave the chance to be seen or diagnosed and treated by a physician. It does make one wonder, was someone to blame for her lack of treatment? Her father, so proud and astute, could also be to blame since he failed to provide her with the life skills and understanding of what a woman should be allowed to have in her life, in Emily’s case, love. His reasoning behind this was that though she had many suitors, none of them were good enough to be an appropriate husband. It was because of this, that Miss Emily never married. In spite of his malevolence, Miss Emily began to decline health-wise even more after her father passed away.

To the reader, this may appear to be a paradox, but in reality, this occurs quite often within families. The reasoning being that it was her father who was the oppressor, who stifled her existence from ever being normal, therefore after he dies, the stress she could not cope with dies with him. Unfortunately for Miss Emily, she had suffered for so long that even the death of her father could not bring her from the brink of sanity. Instead, she succumbs to the symptoms that were suffocating her from within. One thing that is left open to question is the specific label and definition of what she suddenly fell ill to after her breakdown and her father’s passing. It is during this time that Miss Emily begins to withdraw from everyone and everything that ever held meaning in her life. Finally, her symptoms accelerate and become more aggressive in The reader is given one last glimpse at her final condition when some ladies from her town come to offer their condolences, and the least hint as to how serious her condition has become is depicted through their astonishment that she was emotionless, blank, left with no grief.

Reasons of Emily's Tragic Fate in A Rose for Emily. (2020, Nov 23). Retrieved from https://studymoose.com/reasons-of-emily-s-tragic-fate-in-a-rose-for-emily-essay 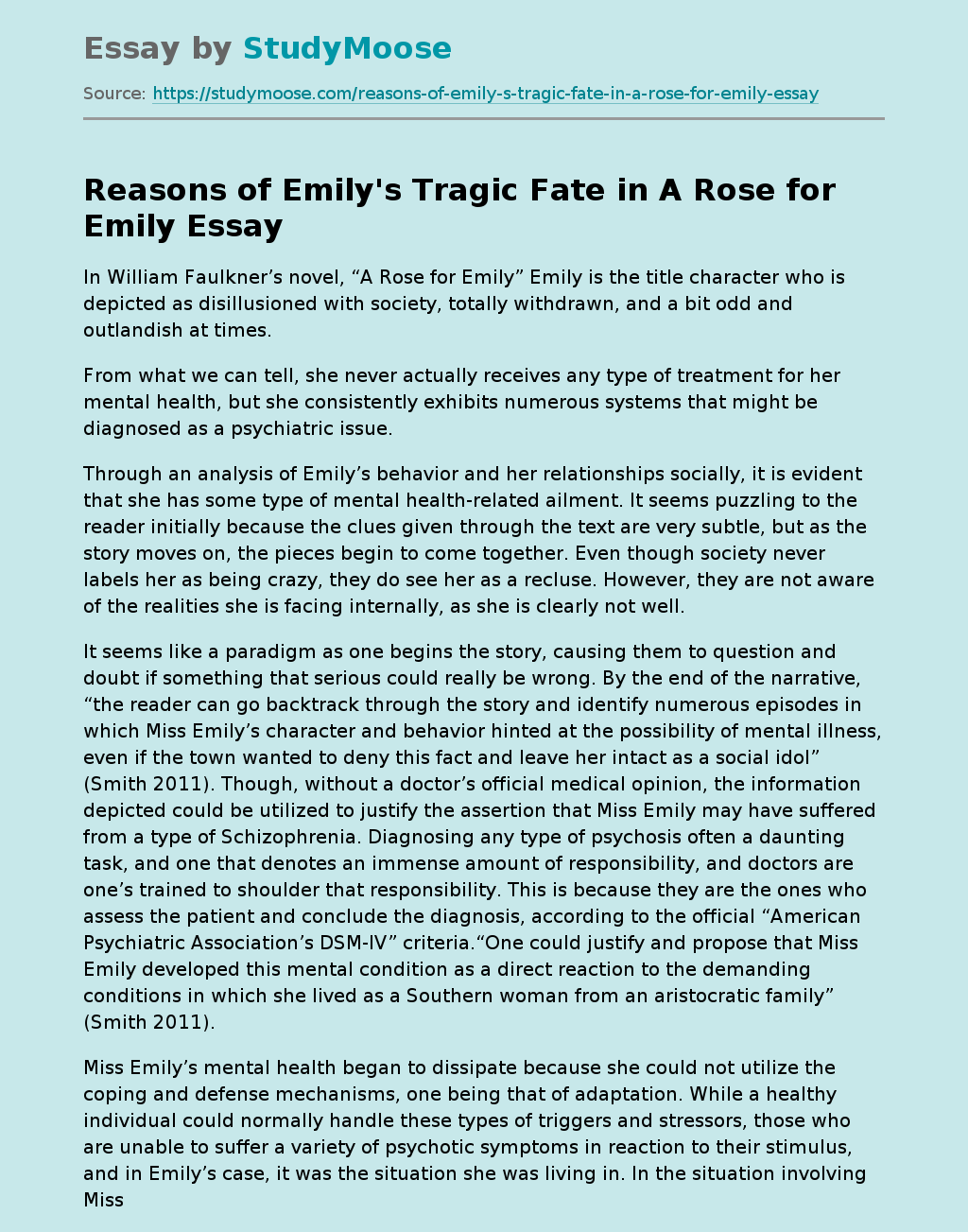