“A Rose for Emily” Plot/Structure

The plot of “A Rose for Emily” separates from the structure of most short stories by not following the normal chronological order. William Faulkner uses flashbacks to give a better understanding of the internal conflict between the protagonist, Miss Emily, and society. The nonlinear plot structure of “A Rose for Emily” gives life to the story and creates a different way of comprehending the narrative by keeping the reader confused on what exactly is happening.

Faulkner begins the first section in present time, giving a recap of Emily’s life as the local townspeople attend her funeral.

Don't use plagiarized sources. Get your custom essay on
“ “A Rose for Emily” Plot/Structure ”
Get custom paper
NEW! smart matching with writer

The funeral is held at her home, which no one had entered for over ten years, drawing the entire town to attend.

The second section uses flashback, describing a time thirty years early, when Emily refused an official inquiry when the townspeople detect a powerful odor coming from her property. This all occurred after her father’s death and the man who people believed Emily would marry, disappeared.

The town community begin to pity Emily, recalling when her aunt went insane.

Another flashback occurs in section three, recounting when Miss Emily first began seeing the man people believe she would marry, Homer Barron. As their relationship continues, the sections ends with Emily goes to the drug store to purchase arsenic.

In section four, Faulkner describes the reactions of Emily buying arsenic. Many believed that she was going to use the poison to kill herself, making her possible marriage to Homer seem unlikely. The women of the town insist that the Baptist Minister talk some sense into Emily; he does, never speaking of what happened but refusing to go back their again.

His wife writes to Emily’s cousins who come for a extended stay. Emily purchases a toilet with Homer’s initial which ignites rumors that the couple’s marriage was back on. Homer is absent from town, believed to be preparing for Emily’s move or avoiding her cousins. Homer reappears one evening but is never seen again. Refusing to leave her house, Emily grows plump and gray. Her door remains closed to outsiders besides an occasional china painting lesson.

The short story ends in section five, returning to the present where the townpeople open a sealed upstairs room in Emily’s home. The room is frozen in time, with items of wedding laid out. The corpse of Homer Barron is stretched out upon the bed, along with a strand of Emily’s hair and indentation of a head on the pillow beside his body.

“A Rose for Emily” plot structure keeps the reader interested while confused from the beginning to the very end. The narrators does wonders on making the nonlinear plot structure confusing yet comprehendible.

“A Rose for Emily” Plot/Structure. (2016, Mar 12). Retrieved from https://studymoose.com/a-rose-for-emily-plotstructure-essay 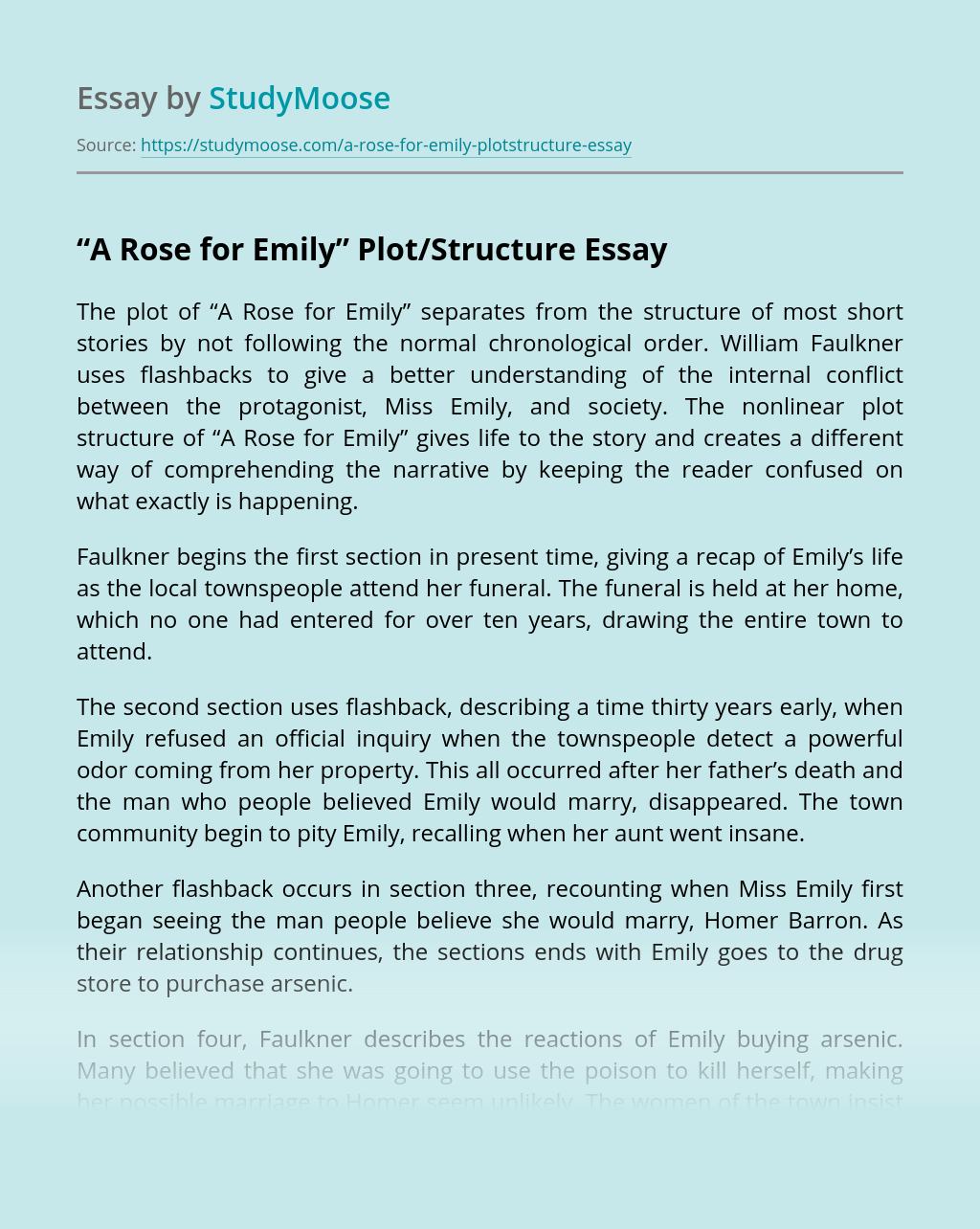