A rose for emily: reader response

William Faulkner’s short story “A Rose for Emily,” is very interesting and unusual. My first reaction after reading the entire short story was just complete shock that anyone can be capable of something so gross to put it simply. When reading through the story, it is written in a very confusing way. The reader has to be actively reading the story or you will miss something which I did the first time reading through it. I was lost until I got to the end and understood the way the author structured the story.

Don't use plagiarized sources. Get your custom essay on
“ A rose for emily: reader response ”
Get custom paper
NEW! smart matching with writer

I was challenged as a reader at times because the story was written out of order on purpose. Being written the way it was, the story gets a more interesting edge and pulls the reader in, it intrigued me a lot. After reading it a second time the reader can see that certain events are foreshadowed throughout the entire story. What is clear in this story is that if one shelters a child all their life, they will never develop emotionally or socially as a result, and people with this background can be prone to unpredictable behavior without the proper guidance.

Emily is sheltered a lot as a child by her father. She wasn’t allowed to do much of anything. She was always expected to behave honorably being of high status in the community.

Like most fathers who think nobody is good enough for their daughters, he chased away every boy that ever tried to court Emily.

She was so attached to her father, so when he died she couldn’t bring herself to believe it. She held his decaying body in their house for three days because she was in such denial. Her father was the only person she had ever really had, and he was all she knew. People should have worried about her then but they just brushed it off and believed “that with nothing left, she would have to cling to that which had robbed her, as people will” (223). That should have been a sign of going down the wrong path. It is one thing to grieve and hold onto a person in your heart, but to physically keep the body in your house like nothing has happened is insane. That was the first sign of her mental issues to me. Emily was left alone with absolutely no hope, and no way of knowing how to be a member of society. This work can be interpreted in different ways, but what stands out to me is a child being sheltered and protected so much by her parent that she never knows freedom or how to live on her own.

Emily never develops emotionally or socially due to her father’s overbearing nature. She didn’t know how to interact very well with others and once everything she was attached to was gone she went off the deep end. She had a love interest named Homer and it seemed like everything was going good, until one day Mrs. Emily went to the store to buy rat poison and nobody ever saw Homer again. It was believed he just went back north, but later we learn the truth that Emily killed him. She had his dead body in a bed upstairs that she would lie next to. She didn’t know how to survive alone so when someone else came into her life she wasn’t going to let them get away. Having nothing in life drove her mental, she did the only thing she knew to do. She didn’t know what real love was or what was appropriate. So desperate not to be alone and have the happily ever after her father deprived her of, she would kill for it. Even the people in the town felt Emily was off, believing she was crazy and saying she would kill herself (224). She never was taught how to love the right way and how to interact socially because of her father and it stunned her development in a bad way. Even though this text is almost a century old, it can reflect in the times now.

The text is written back in the 1930’s, so people don’t really hear much of an old lady killing a man to be her husband, that’s just outrageous behavior. The same problem arises as in Emily’s story as with some of the things that people do now though. People like Emily grow up in a box. When a person is in a box all their life and finally get out they go crazy. Whether that be partying until the crack of dawn or murdering people to satisfy their own desires like Emily did. It all could have been avoided if she was given the right tools and guidance to navigate through life but she wasn’t prepared so she coped the only way she knew how. Her behavior cannot be justified but it can be understood. This happens with a lot of people in current times. We see it a lot with teens and young adults if they grow up in a home with many rules and beyond strict expectations, as Emily’s father put on her. I’ve seen it happen with my own eyes. A friend of mine was so sheltered and had no freedom. He was so overwhelmed he went off the deep end and got himself a gun.

He started shooting people at random for his own reasons, only he knows, and in the end he ended up killing himself as well. Like Emily he wasn’t guided properly, and did what he could to cope with the situation he was in. So we should really think about the things we put kids through at a young age because it could have a lasting effect the rest of their life and cause unpredictable behavior. Relating to this story is partly easy for me. I am included in this audience for this story because I know how it feels to be in a box. Feeling alone and having no hope left is something I know almost everyone can recall at some point in their life. I had an event change my life and it left me feeling absolutely hopeless and like nothing would ever be right ever again. The difference between when I hit rock bottom and when Emily hit is I had family and friends to help me through it and guide me to the right path but Emily didn’t.

She never interacted with anybody but her father and, so when she had nothing left she went left instead of right. Having the right tools can make all the difference in life and Emily was never taught the tools so she invented her own, and that can happen to anyone. This work is geared toward parents but also the world to show one of the worst consequences of protecting a child so much it actually cripples them. Protecting your child can be a good and bad thing. Good in the sense they are protected from things no child should go through but bad because if they are sheltered to much their development emotionally and socially good be jeopardized. That can result in some unpredictable behavior that could have dire consequences if the child is not given the right tools. Parents have to find the balance so that they are not out of control but still get to learn some lessons to help them grow. If there is not balance some may just party hard all night long, but some may be so traumatized that the only way they know how to survive is by making sure they are never alone by doing the unthinkable, murder, and end up just like Emily.

A rose for emily: reader response. (2016, Apr 07). Retrieved from https://studymoose.com/a-rose-for-emily-reader-response-essay 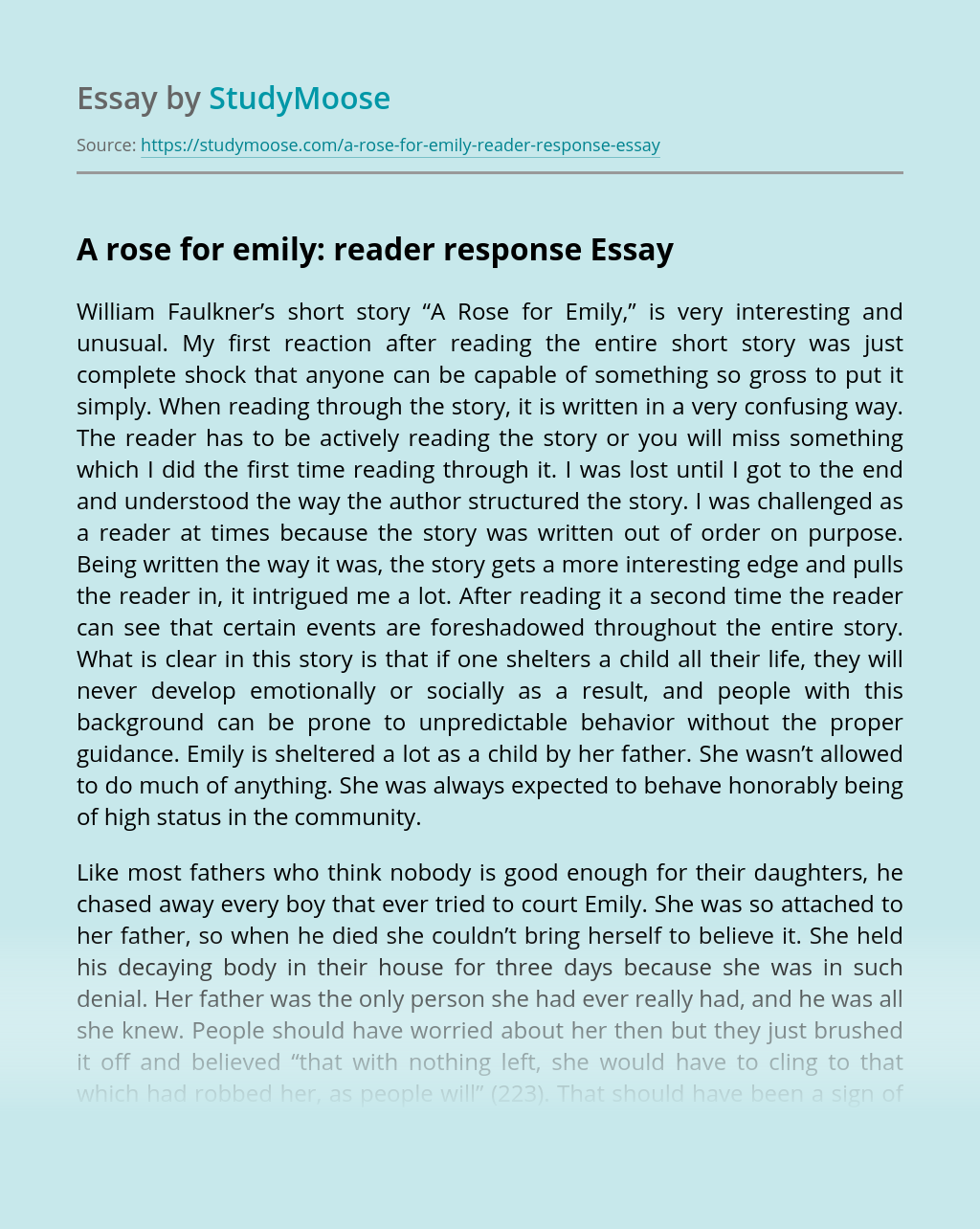