Destiny and Freewill  This is one of the most important themes in the play and leaves the reader with the engrossing question of whether or not freewill is an illusion. The play doesn’t actually answer this question, but it shows the complex interplay of fate and freewill that culminates in Oedipus’ tragic plight. Jocasta, Laius and Oedipus all try to escape the prophecy but they are unwittingly led into their seemingly unavoidable fate. This element of the play is intended to show the reader the power of prophecy and the supreme authority of the gods in contrast with the futility of human beings.

Don't use plagiarized sources. Get your custom essay on
“ King oedipus analysis ”
Get custom paper
NEW! smart matching with writer

The play also shows how human nature plays a vital role in the fulfilment of the prophecy. Compassion and pity on the shepherd’s behalf prevents Oedipus from dying as a baby. Oedipus’ own impetuous temper results in the murder of his own father, Laius. His momentary display of intelligence in solving the riddle is his ultimate triumph as well as his seed of destruction as it results in marriage to his mother, Jocasta.

In resolving to find out the truth about his birth, he brings the suffering on himself. His arrogant, taunting attitude towards Teirisias further exposes the terrible truth.

In this way, the play shows how freewill also contributes to Oedipus’ downfall. Pride and humility  Pride is Oedipus’ fatal flaw; his arrogance towards both the gods and human beings leads to his destruction. Sophocles probably intended to teach people the importance of humility and recognising the superiority of the gods that they believed in.

Oedipus’ arrogance is displayed in his long, speeches and in the hot-headed way he unknowingly killed his father. His initial refusal to accept any blame or wrongdoing on his part shows that he has a high opinion of himself.

One of the main sources of his pride is his defeat of the Sphinx, which saved Thebes and put him on the throne, and yet the reader knows that this was also the cause of one of his foulest crimes, marriage to his mother. In this way, the playwright communicates a message about the folly of taking human achievement too seriously. Because of this, the play is not very humanistic but belittles human beings as futile and flawed. Wisdom and ignorance The conflict between Teirisias and Oedipus represents the conflict between wisdom and ignorance, Teirisias being wisdom and Oedipus being ignorance.

Teirisias’ comment “To be wise is to suffer” is ironic because it comes true for Oedipus. When he learns the truth about himself and becomes wise, he is in utmost agony. The play shows that perhaps having knowledge is not necessarily a good thing, as Teirisias warns, and that there are limitations to our knowledge that we should accept. Sight and blindness  Teirisia is a blind seer, which sounds like a contradiction in terms. However, even though he is physically blind, he has the insight and knowledge, which Oedipus lacks. When Oedipus finally gains this insight at the end of the play, he blinds himself physically.

Throughout the play, Oedipus is blinded by his own arrogance, shown in his refusal to accept that he is the cause of Thebes’ misery. “Living in perpetual night, you cannot harm me, or any man else that sees the light. ”  His deliberate disbelief enables him to issue the curse, never considering that it might affect himself in the end. Oedipus is also blind to his true position in relation to the gods. He believes he can thwart prophecy and outsmart the gods. The attitude he displays shows that he has almost made himself a god, who has the power to curse and demand whatever knowledge he seeks.

Humility  Sophocles certainly agrees with this contention in his play, King Oedipus. The character of Creon who is more cautious is intended to contrast with Oedipus’ impetuous arrogance. It is Oedipus’ lack of humility that causes much of his own suffering. On the other hand, Creon’s more careful approach to life evades a potentially disastrous situation when Oedipus accuses him of conspiracy. Characters Oedipus  Oedipus is willing to help the people of Thebes. “I would gladly do anything to help you. ” He is actively involved with his city.

“I have not thought it fit to rely on my messengers, but am here to learn for myself… ”  Arrogant – proud of his own abilities such as solving the riddle of the sphinx. “Until I came – I, ignorant Oedipus, came – and stopped the riddler’s mouth, guessing the truth by mother-wit, not bird-lore. ” Sympathetic towards the city of Thebes – “I grieve for you my children. Believe me, I know all that you desire of me, all that you suffer; and while you suffer none suffers more than I. ”  Jumps to conclusions about the ones closest to him. He accuses Creon of conspiring to take over the throne.

“Must Creon, so long my friend, my most trusted friend, stalk me by stealth and study to dispossess me of the power that this city has given to me… ” He assumes that Jocasta fears that he was an illegitimate child. “The woman, with more than woman’s pride, is shamed by my low origin. ”  Easily angered, irascible especially by Teiresias – “Insolent scoundrel… Shameless and brainless, sightless, senseless sot! ”  Steadfast and staunch in his quest to expose the truth. “Nonsense: I must pursue this trail to the end, till I have unravelled the mystery of my birth. ”

Not a fatalist; expresses the belief that ‘chance rules our lives’.  Acts as the mediator between Oedipus and Creon, typical of her role as a mother and wife. “What is the meaning of this loud argument, you quarrelsome men?… You are making much of some unimportant grievance. ”  Abandons Oedipus on the hillside to perish because of prophecy yet dismisses prophecy later in the play. “For I can tell you, no man possesses the secret of divination. And I have proof… Why should you then, heed them for a moment? ” and “A fig for divination! ”  Cannot face the horror of the truth and dies at her own hands

Creon  A contrast to Oedipus in terms of character. He is calmer and more reasonable. “Reason with yourself, as I; and ask, would any man exchange a quiet life, with royal rank assured, for an uneasy throne? ” He is more humble and cautious- “I do not presume to say more than I know”, and acknowledges the gods – “God will decide, not I. ” He is deeply hurt by Oedipus’ accusations – “If he thinks that I have done him any harm, by word or act, in this calamitous hour, I will not live… ” Teiresias  Physically blind, yet gifted with second sight (prophecy).

“All heavenly and earthly knowledge are in your grasp. In your heart, if not with eye, you see our city’s condition. ” Reluctant to share his knowledge with Oedipus because he knows the damage it will cause. “When wisdom brings no profit, to be wise is to suffer. ” Laius  He is only mentioned through other people in the play. Shepherd  Like Teiresias to impart his knowledge until threatened. Oedipus terrorizes, “Answer! If I must speak again, you die! ” He also serves to confirm Oedipus’ greatest fears. Chorus Represents the voice of the elders as well as the general public.

It comments on the action in the play, sometimes siding with Oedipus, other times questioning his actions and words. They are the voice of religious belief, more than once urging the need to heed the words of the gods. “I only ask to live, with pure faith keeping in word and deed that Law which leaps the sky, made of no mortal mould… whose living godhead does not age or die. ” It is at times philosophical, commenting on the nature of existence and the frailty of human attainment and success. “All the generations of mortal man add up to nothing! Show me the man whose happiness was anything more than an illusion followed by disillusion.

Here is the instance, here is Oedipus, here is the reason why I will call no mortal creature happy… Then learn that mortal man must always look to his ending. And none can be called happy until that day when he carries his happiness down to the grave in peace. ” Symbols Sight and blindness – this is used as a metaphor for knowledge and ignorance. Context  The play was written during the Classical period in Ancient Greece in the 5th century BC, a time of optimistic humanism. Sophocles tends to celebrate humanity but also plea for adherence to justice, moderation and the gods. 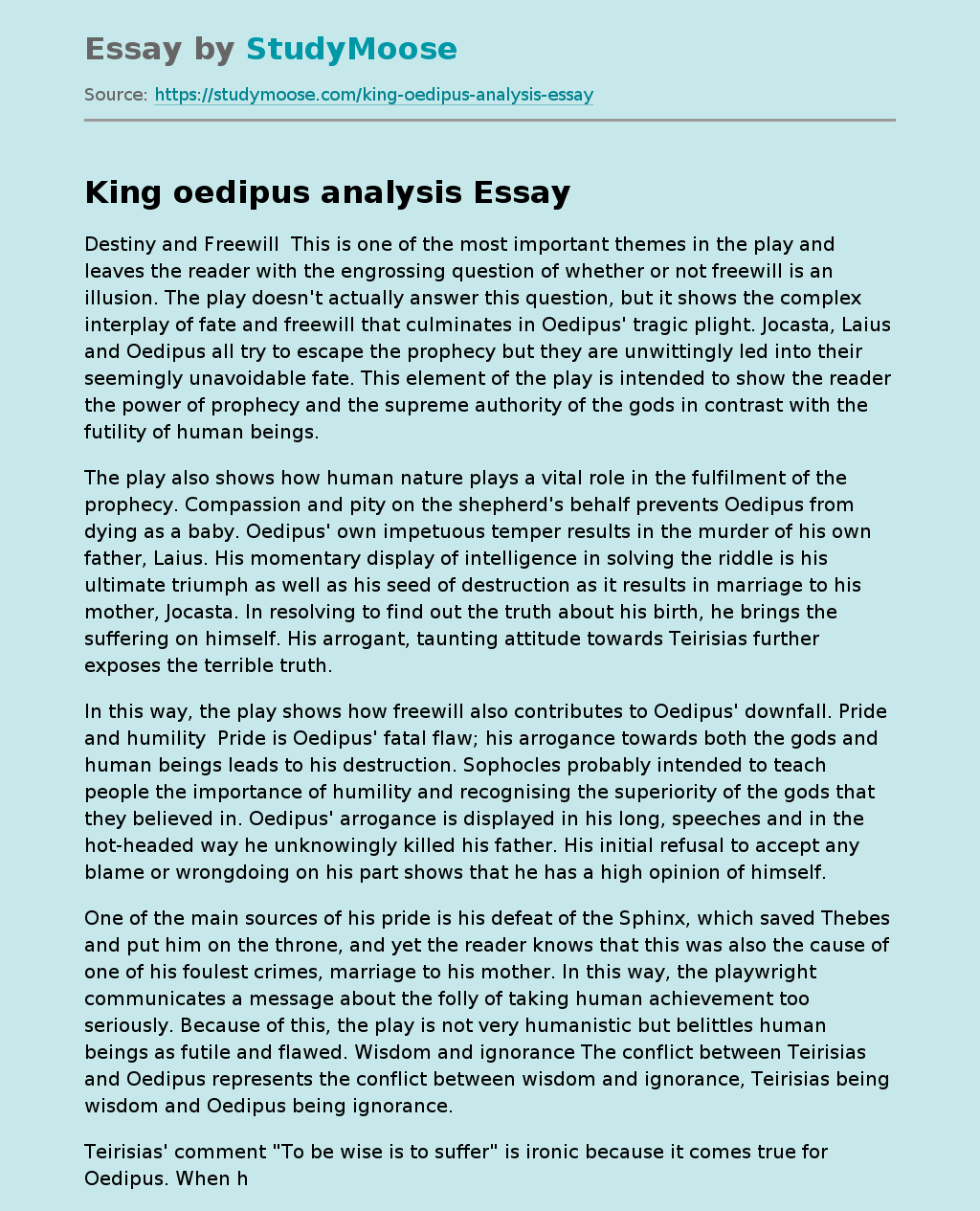