The Oedipus Rex Cycle As a Tragedy Of Fate

In several of the works discussed throughout the semester, physical blindness is used to convey the truth that is unacknowledged by a character who is emotionally blind. In order to physically see the truth, one needs to recognize their tragic flaw, and then use this discovery to gain insight on their actions. Within Sophocles series, The Oedipus Cycle, both stories, Oedipus Rex and Antigone, portray a tragic hero who expresses a great deal of emotional blindness which stems from their tragic flaw.

Don't use plagiarized sources. Get your custom essay on
“ The Oedipus Rex Cycle As a Tragedy Of Fate ”
Get custom paper
NEW! smart matching with writer

Throughout each story their tragic trait serves as the impediment for their ability to accept their terrible fate that is known all along, and eventually leads to their downfall. In both stories, Teiresias, the blind prophet represents the truth that is blindly rejected by each tragic character.

In the story of Oedipus Rex, the tragic hero, King Oedipus, is unable to acknowledge the truth of his past and the reality of his fate due to his excessive pride and lack of insight.

Initially, he flees Corinth to escape the prophecy he received by the Gods; that he would marry his mother and kill his father. Off the bat, Oedipus displays excessive self-importance, convinced he is smart enough to defy the all-powerful Gods and avoid his inevitable fate. Ironically, it was this action that would lead him to do exactly what the prophecy had predicted. Now the King of Thebes, Oedipus’ overconfidence, which heightened with his success of the Sphinx’s riddle, or what he refers to as “saving” Thebes, blinds him even more.

Oedipus is told by the blind prophet, Teiresias, that he murdered King Laius and caused the plague of Thebes, yet Oedipus doesn’t give his own involvement any consideration and instead blames Creon. His arrogance prevents him from acknowledging any of Teiresias’ hints and blinds him from correlating his past prophecy with the information about his future that Teiresias is able to see. Teiresias warns him, “This day will bring your birth and your destruction”. (Sophocles, 23) Clearly, Oedipus only thinks about himself and can’t see the big picture here as he only gets angry with Teiresias instead of listening. Teiresias tells him; “Of the children, inmates of his home, He shall be proved the brother and the sire, of her who bare him son and husband both, Co-partner, and assassin of his sire.” (Sophocles, 18) Oedipus is unable to see what’s going on, even whilst hearing his fate for a second time. The more Oedipus learned about his past, the more he became blind to it. Teiresias tells him, “You mock my blindness, do you? But I say that you, with both your eyes, are blind: You cannot see the wretchedness of your life.” (Sophocles, 20) Though physically blind, Teiresias is able to clearly see the truth of Oedipus’ situation, and is aware of exactly what’s to come.

It’s not until it’s already too late that Oedipus finally begins to open his eyes to reality. Jocasta, the wife and mother of Oedipus, reveals that King Laius was killed at a place where three roads meet, the exact location where Oedipus had killed a man. Even with the awareness of this information, Oedipus is still blind to the entire truth. It is not until a Corinthian messenger reveals his biological parents, that Oedipus finally understands the terrible truth of his actions. His realization of the truth through the messenger ironically reverts back to the opening scene where Oedipus arrogantly addresses the people of Thebes. “I thought it wrong, my children, to hear the truth from others, messengers. Here I am myself- you all know me; the world knows my fame: I am Oedipus”. (Sophocles, 4) Sophocles ties in these lines to express the irony Oedipus’ arrogance has on his blindness to the truth, and to express how it all came back to bite him in the ass.

With the realization of his fate, his confidence shatters, and Oedipus is unable to cope with the truth after being blind to it for so long. Although he ends up voluntarily gouging out his eyes and blinding himself, for the first time Oedipus gained insight. He finally comes to term with his actions; the murder of his father and the marriage of his mother. He realizes that the prophecies are true, and that it’s impossible to trick the Gods and avoid your fate. He was finally able to see the truth that he could never before, although I guess you could say he was a little too late. Oedipus had become physically what he had been emotionally all along, whereas Tiresias had been physically blind but knew exactly what was going to happen the entire time.

As for the story of Antigone, the metaphorical idea of blindness holds a similar concept as it does in Oedipus Rex. A fine sighted character is blind to the truth that surrounds him, due to his tragic flaw which serves as an impediment to his understanding of the truth. In Antigone, Creon represents a tragic hero who is emotionally blind to the effects his hubris mentality has on his actions, and how it will eventually lead to a tragic downfall for him and his loved ones. Likewise, to Oedipus Rex, the blind prophet Teiresias represents the truth, with the ability to see everything whether it be from the past, present or future. At first, Creon is portrayed as a rational leader, but his pride quickly interferes with his decisions. Creon wrongfully denies Polyneices his god given right to a proper burial. This action portrays Creon’s overconfidence in himself as a powerful figure above the Gods. Creon then refuses to hear out the desperate Antigone, who simply acts out of love for her dead brother. He tells her, “These are my principles. Never at my hands will the traitor be honored above the patriot.” (Sophocles, 160) His stubborn pride in this scene blinds him to the desperate love Antigone feels for her brother as he is unable to put himself in her position, and simply sees her actions as defiance. With the intentions of giving her brother the respect and honor he deserves Antigone defies Creon and buries her brother. With the inability to accept that anyone would ever disrespect him, Creon makes a rash decision, and sentences Antigone to death. Creon’s son Haemon who is engaged to Antigone, begs for him to reconsider the punishment, but Creon stubbornly refuses to compromise or even listen to him. Creon is so overcome with pride that he is blind to his sons’ love for Antigone and to the reference he makes of his own death. Haemon tells his father, “Then she must die-but her death will cause another”. (Sophocles, Line 610) Creon is so stuck on being right that he is blind to his child’s clear suicidal thoughts. Little would Creon know, that his lack of insight and extreme emotional blindness would cause the death of many of his loved ones.

As a final attempt to get Creon to see the truth, the blind Teiresias warns Creon of his terrible fate, but of course, his pride takes over once again and instead of listening, gets angry with Teiresias. Creon says, “Prophets are all a money-getting tribe”. (Sophocles, Line 820) Creon’s arrogance overcomes him, and he dismisses everything Teiresias says. It is not until Teiresias directly tells him that he will lose his child, that Creon becomes worried and realizes the possible consequences of his actions. Unfortunately, the consequences of Creon’s arrogance had already become true. With the death of Antigone, Haemon, Ismene, and Queen Eurydice, Creon finally realizes the reality of what his actions had done.

Unfortunately, both Oedipus and Creon come to realize their arrogance after it’s too late and the damage had already been done. Neither tragic hero was able to face the flaw that blinded them, until something important was taken from them. They were each blinded to the truth that Teiresias’s conveyed to them due to their excessive pride. The “cure” to one’s emotional blindness is the acknowledgment of their flawed actions that led them to the tragedy that occurred. Unfortunately, both Oedipus and Creon recognized their ignorance a bit too late, resulting in the tragic fates that occurred. In my opinion, neither Oedipus nor Creon were really “cured” from their emotional blindness, but they are each able to acknowledge at the end that they were responsible for the way their fate turned out. Oedipus shamefully blinds himself, and Creon accepts responsibility for the suicide of his wife and son. As the chorus once said in Oedipus rex, “Pride breeds the tyrant violent pride, gorging, crammed to bursting with all that is overripe and rich with ruin-clawing up to the heights, headlong pride crashes down the abyss-sheer doom!” (Sophocles, 15)

The Oedipus Rex Cycle As a Tragedy Of Fate. (2020, Nov 26). Retrieved from http://studymoose.com/the-oedipus-rex-cycle-as-a-tragedy-of-fate-essay 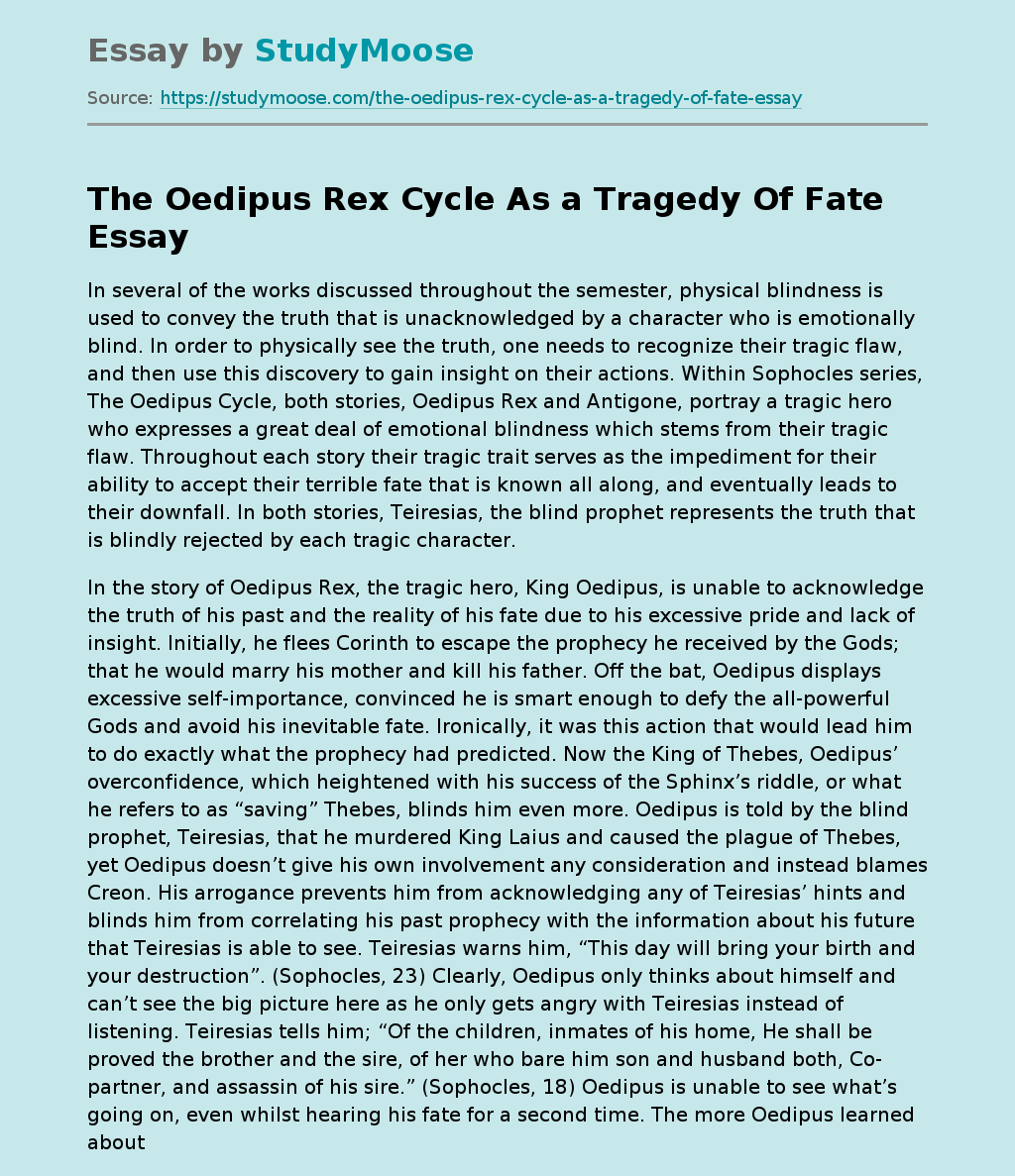