Fate vs. Free Will Oedipus Rex

Oedipus Rex is among the Greek tragedies that still draw interest from modern audiences. The play explores numerous themes, including Oedipus’ quest for identity, the nature of innocence and guilt, blindness and sight, and the abuse of power, however, the divisive question of whether humans enjoy free will or if they are victims of fate is the most powerful and fascinating theme discussed in the play. The author, Sophocles, successfully distinguishes how fate and free will affect human life choices. His sentiments are consistent with Greek beliefs in the supernatural.

Don't use plagiarized sources. Get your custom essay on
“ Fate vs. Free Will Oedipus Rex ”
Get custom paper
NEW! smart matching with writer

In the tragedy, prophecy appears to predetermine fate, robbing humans of their ability to act or think freely. The prophet admits that it is impossible to avoid fate, and despite Oedipus’ best efforts, he becomes a victim of his fate. In Oedipus Rex, even though Oedipus tries to change his fate, it is clear that he is unable to act on his free will and his actions push him toward his tragic and inevitable end.

Oedipus’ inability to overcome his fate and act on his free will is a significant theme in Oedipus Rex. According to Sean Sheehan, ancient Greece understood chance and fate through myths, oracles, and tragic drama (39). This belief is consistent with the theme of fate in Oedipus Rex, whereby the oracles predict the protagonist’s tragic end. Sheehan further adds that three different prophecies all lead to correct outcomes (39). Even though Oedipus argues and dismisses the prophecies’ messages and warnings, he still ends up meetings a tragic end, as foreseen by the oracles (Sheehan 39).

In this context, the author affirms the argument that free will had no impact on Oedipus’ choices, meaning that whichever actions Oedipus took, the outcome was already predetermined. Sheehan states that curse on Oedipus was unavoidable since it existed before Oedipus was born, and Apollo would ensure that it would come to pass. This statement affirms that Oedipus was helpless in the situation and that he had no control over his life’s outcome. However, Sheehan also argues that there were situations in the play where Oedipus had the option of taking a different course and avoiding his fate. Nevertheless, the protagonist ends up making choices that push him closer to his fate. Sheenan gives an example when Oedipus is at a crossroads. If he chose to go the other direction, he would avoid the road rage incident (Sheehan 39). In this context, free will was a mirage, and Oedipus’ destiny was to meet his tragic end. Therefore, although humans, including Oedipus, pride themselves for on their free will, Oedipus Rex shows the Greek belief in fate, concluding that people had no control over their fate.

Even though the argument that Oedipus did not have choices is popular in literary circles, some critics disagree. Sheehan states that possibilities exist and unfold after some premeditation (40). For example, when Oedipus shows up at the crossroads and meets Laius, the coincidence occurs for the story to explain the events rationally and create a casual chain that makes the protagonist’s fate inevitable. Sheehan further states that inevitably in Oedipus occurs when necessity is the cause of something contingent (40). Therefore, necessity is an organizing force that makes accidental or coincidental events inevitable. The inexplicable events dictate that human beings cannot foresee human life, but only the gods can (Sheehan 40). Therefore, Sheehan successfully shows how choices did not impact the overall outcome since Oedipus’ actions were intentional, making his fate inevitable.

Additionally, Oedipus’ inability to understand the ontological patterns and make sense of the universe gives him a false sense of conform that he can avoid his tragic fate. In this context, when the casual chain does not come to pass, the world appears to be ontologically incoherent. Jocasta looks at this inconsistency positively, as it gives her a chance to avoid meeting her fate of having sexual relations with her son (Sheehan 41). Also, Oedipus seeks answers to comprehend reality. As a result, he ignores his mother’s advice and confronts his fate (Sophocles 296). Even though he experiences misfortune, such as blinding himself, he still disregards the power of fate and considers his experiences as autonomous. Therefore, Sheehan proves that his decision to rely on ontological uncertainty as comfort is a miscalculation since he meets a tragic end.

Sheehan successfully shows how fate was unavoidable despite Oedipus’ efforts to exercise free will. According to the author, Oedipus ends up feeling the weight of his fate, consequently losing everything that gave him a sense of autonomy (Sheehan 42). This development is consistent with the Greek belief that people cannot escape their fate and the consequences of their actions. The author explains the eventuality of Oedipus’ fate retrogressively by looking at his father Laius’ actions and how they came to affect the protagonist. Although the oracle’s prophecy infers the curse on Laius, Oedipus could not escape his fate even before he was born. Therefore, Sheehan demonstrates how it is clear that Oedipus’s destiny was already set, and he was to murder his father and marry his mother.

Oedipus Rex still inspires debates on the age-old question on free will versus fate. Critics agree that Oedipus could not avoid his tragic fate. Even though Oedipus appears to have choices that could alter his fate, he is unable to act autonomously since his fate was already set.

Fate vs. Free Will Oedipus Rex. (2021, Mar 25). Retrieved from http://studymoose.com/fate-vs-free-will-oedipus-rex-2-essay 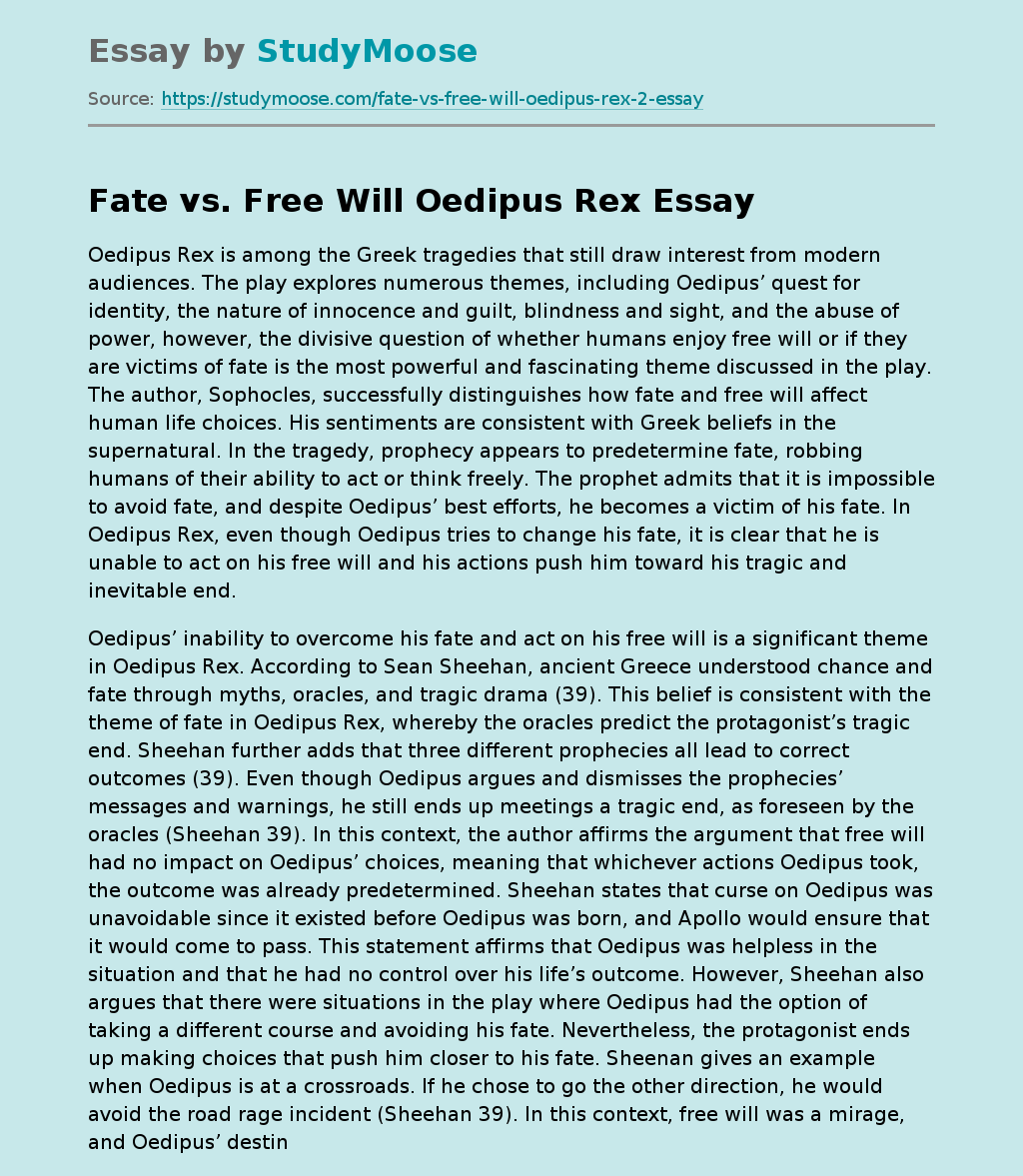