Hamartia with Respect to Oedipus in the Play ''Oedipus Rex''

Hamartia with respect to Oedipus in the play Oedipus Rex.

The tragedy must not be a spectacle of a virtuous man brought from prosperity to adversity: for this moves neither pity nor fear; it merely shocks us; nor again, that of a bad man passing from adversity to prosperity…It must concern a man who is not eminently good and just, yet whose misfortune is brought about not by vice or depravity, but by some error or frailty. (The Poetics) In Oedipus Rex, the character of Oedipus is a victim of hamartia, and his particular flaw is hubris.

Don't use plagiarized sources. Get your custom essay on
“ Hamartia with Respect to Oedipus in the Play ”Oedipus Rex” ”
Get custom paper
NEW! smart matching with writer

“Hamartia “is an Aristotelian term which often finds its usage in Greek tragedies. It is often referred to as a “tragic flaw “or “tragic error”. Aristotle in his work,”Poetics’’described Oedipus Rex a tragedy by Sophocles as a perfect example of the demonstration of the term “hamartia”.

It is hamartia that creates a tragic hero. It is also said to mean missing the mark, or moral deficit or tragic error.

Hamartia is what causes the tragic hero to do the opposite of what he intends to do. In case of Oedipus it is his flaw of character or ignorant error that can be said to have led to his downfall. It can be argued that it is not hamartia alone that led to Oedipus’ downfall, the elements of fate, and free will also are ones to be considered but the fact remains that it is the fatal flaw or fatal error or hasty judgement of the character or characters involved that triggers off a set of tragic sequences predestined or not which ultimately lead to a tragic end, and this remains relevant in case of Oedipus Rex.

Hubris also seems to be the root cause for most of the actions undertaken by the characters in the drama including Oedipus’ biological parents. In the opening scenes of the play Oedipus comes across as the ideal King, insightful, concerned for his citizens and a man of action. Oedipus chief flaw or hamartia appears to be his “hubris” or pride. The whole point of tragedy is how faults can undo even good intentions and lead to downfall. Oedipus is considered a great man, the Chorus calls him “the first of men “. Throughout the play we come across both the good and bad side of Oedipus. He is well intentioned but nonetheless there are hints of pride and narcissism, “I will bring everything into light’ ’and ironically in the process of doing so in a mentally blind fashion loses his sight physically in the end.

In the opening scenes of the play the audience does see traces of Oedipus’ “self-glorification, “I Oedipus whose name is known afar”. His confidence in his own flawlessness is what, paves the way for his downfall, his hubris lies in his innate sense of righteousness, and he thinks himself to be above reproach. Oedipus comes across as impulsive, hasty in judgement and quick to take offense during his heated exchange with Teiresias, his brother-in-law Creon and the old shepherd .It is of importance to note that the Greek title of the play was, Oedipus Tyrannos/ Oedipus the tyrant .It is of significance that the Chorus mentions that it is pride that ‘breeds the tyrant’, “from castled height pride tumbles to a pit”. They also say that he who walks in ‘his own high-handed way’ will not escape ‘doomed prides’ punishment’.

His crimes of patricide and incest although done through ignorance and contrary to his nobility. It can be said that his cardinal sin, pride is what led to his slaying his biological father Laius in the first place, although he was provoked, his volcanic anger and pride is evident because he did not even spare the grooms all except the one who escaped with his life. And such a rash reaction cannot be justified. We come across his arrogance, rash temper and hastiness in judgement. He hurls insults at Teiresias and even accuses him of co-conspiring with Creon without any shred of proof .He goes as far as to taunt his blindness. Oedipus is over confident of his wisdom; he shuns the truth and prophecies of a tried and trusted wise man like Teiresias. Oedipus during his heated exchange with Creon appears as one willing to use his power in a tyrannical fashion, saying that he would rather have Creon dead than exiled.

Oedipus exercises a severe lack of judgement his once renowned wisdom is clouded by his pride. The Chorus advises caution yet he takes none. He is quick to take offence. He is seemingly preoccupied with his own nobility and rigid in his quest for the truth. Oedipus ‘blindness to what is plain to the audience is what creates the image of a tragic hero described by Aristotle .Even if we excuse Oedipus ‘actions as those done in ignorance we yet cannot deny that he shuns all well intentioned advice from Teiresias, the Chorus, Jocasta and this is certainly because of his pride which is his case can be said to be his hamartia or that which leads him to his own downfall.

Hubris in this play is not one that Oedipus’ alone displays. Pride can also be seen in this drama in the perspective of the characters trying to evade the oracle which in ancient Greek times would be considered pride in itself because the Gods determined fate and to outwit the Gods wasn’t a wise thing to do in the eyes of the Greek audience. Beginning with Laius and Jocasta getting rid of Oedipus, and later on Oedipus who does not know that he is adopted leaves Corinth to keep from harming his parents. If Oedipus was noble enough to leave his adoptive parents for the sake of the oracle not being fulfilled then he would have been noble enough to keep from slaying Laius had he known that he was his father. The evasion is caused by hamartia however we may see it, as a fatal flaw or hasty judgement, in case of flaw chiefly hubris; pride in trying to avoid what was in store itself led the way for Oedipus ‘tragic end.

The tragedy of Oedipus is his pride in his nobility and ability to a certain extent, had he not tried to avoid the divine oracle, he would have remained in Corinth and the oracle may never have been fulfilled .Had he not been prideful and rash in his actions, he would not have slayed Laius out of wounded pride. He is full of self –confidence that makes him blunder consistently. “I am a child of Fortune, the giver of good and I shall not be shamed …Born thus, I ask to be no other man than what I am, and will know who I am.This is an example one of the many fatal flaws of Oedipus.

Hence hamartia is a literary tool used to fully measure the consequences of ones actions. Hamartia is what highlights the downfall of a hero and what makes a tragedy a tragedy.

Hamartia with Respect to Oedipus in the Play ''Oedipus Rex''. (2016, Mar 15). Retrieved from https://studymoose.com/hamartia-with-respect-to-oedipus-in-the-play-oedipus-rex-essay 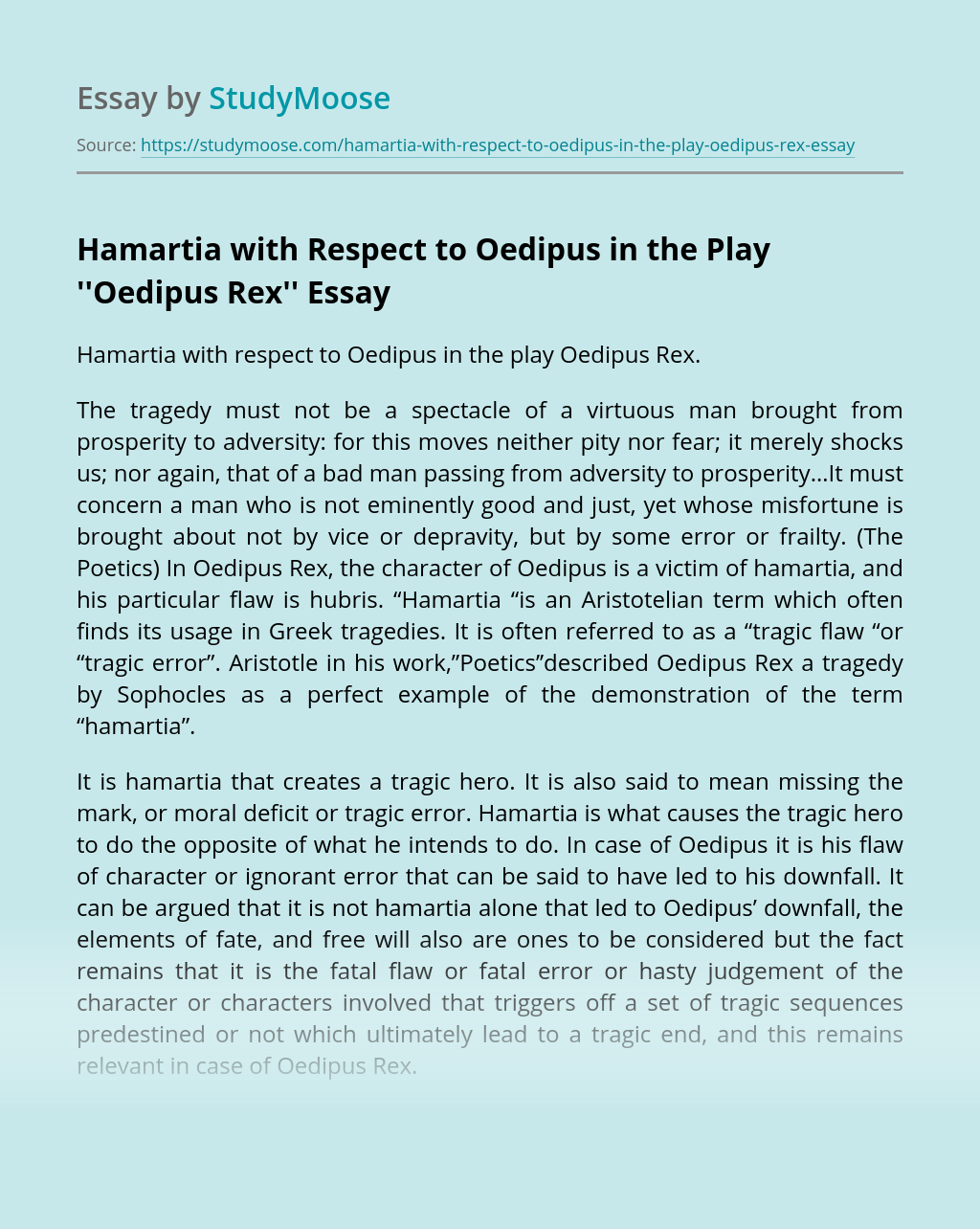