The Oedipus Complex in Oedipus Rex, The Metamorphosis and My Old Man

The three literary works under investigation in this essay, Oedipus Rex by Sophocles, The Metamorphosis by Franz Kafka and My Old Man by Charles Bukowski can be said have a common theme: the tense relationship between father and son, as epitomized by Freud’s Oedipus complex. While the interpretation of the works under discussion cannot be narrowed down to a single topic, it can be said that the Oedipus complex is a leitmotif in all three literary pieces. Although this theme functions differently in the three texts, it is important to note that the Oedipus complex is a pivotal element in all of them.

Don't use plagiarized sources. Get your custom essay on
“ The Oedipus Complex in Oedipus Rex, The Metamorphosis and My Old Man ”
Get custom paper
NEW! smart matching with writer

Sophocles’ Oedipus Rex is a complex text, in which countless symbols and meanings are interwoven. The tragedy revolves around the plight of Oedipus, a man who is entrapped by a relentless and beguiling destiny. While seemingly ascending to greatness and recognition, the hero only manages to sink deeper into sinfulness and disgrace. One of the major conflicts in the play is Oedipus’ constant search for the truth.

Simon O. Lesser analyzes the widespread meanings of the tragedy in his essay Oedipus the King: The Two Dramas, the Two Conflicts.

According to Lesser, despite the convention of absolute unity of time, place and character in classical dramas, Oedipus Rex should be analyzed as a double tragedy, with a foreground and a background conflict which overlap. Thus, Lesser identifies the numerous ambivalences contained by the text. In the critic’s view, the ambivalence is given by Oedipus’ subconscious struggles, which undermine the seemingly benign occurrences in his life.

The play is therefore a consummate example of Sophocles’ mastery of the subconscious and its secrets.

Oedipus’s life is marked by blindness and dim, slumbering consciousness. He gropes for the truth about himself and his origins, yet he only discovers it when it is too late. As Lesser points out, Oedipus’ blindness throughout the tragedy is representative of the way in which the human subconscious works. While seemingly leading a glorious life, the hero’s happiness is overshadowed by repressed feelings of guilt and responsibility. There is a constant interplay between the objective reality that Oedipus is conscious of and his own obscure and deeply-rooted guilt.

Outwardly, he is a responsible king, who endeavors to protect the interest of his subjects and find the curse behind the plague that threatens and decimates the state. Inwardly, however, Oedipus is the prey of his own anxieties. Lesser shows therefore that Oedipus Rex is a play about the repressed, subconscious feelings which struggle to come to light despite resistance. Although Oedipus appears to have no knowledge of his crimes, the parricide and the incest, his subconscious torments him with hints and misgivings.

As Lesser remarks, the hero actually refuses to acknowledge evidence of his own guilt, in a desperate attempt to forestall the course of an inevitable fate. Moreover, Oedipus’ refusal to know is manifest only in his conflict with Teiresias and Creon and not in the presence of Jocasta, in front of whom he is able to accept his weaknesses and failures. Lesser’s offers a psychoanalytical interpretation of Oedipus Rex, in which the conflict of the tragedy is given by the clash between the objective reality and the extremely burdened subconscious of the main character.

Kafka’s Metamorphosis is also a literary work where the subconscious realities play a major role. In his Freud and the Magic of Kafka’s Writing, critic Walter Herbert Sokel notes that Kafka’s writings are a tribute to Freudian research. According to Sokel, both Kafka and Freudian psychoanalysis share a genetic approach to human existence. The critic interprets the famous short story as a work in which psychoanalytical elements are primordial. In his view, the metamorphosis of Gregor Samsa into a giant insect is directly related to the idea of repression, as explained in Freudian terms.

The transformation is thus the result of a long-inhibited wish that Gregor nurtured: his desire to be able to leave his unsatisfying and frustrating job. Unable to fulfill this wish because it conflicted with the duties towards his parents and his sister, Gregor’s hidden subconscious needs rebel and invade his objective reality. The metamorphosis functions as a neurotic symptom, which has the role of fulfilling the central desire of the main character, without appearing to do so. The monstrous, fantastic shape that Gregor takes corroborates the idea that his transformation is actually the exposure of his guilt-ridden subconscious.

Moreover, while the metamorphosis serves to liberate Gregor of all his duties, it also functions as an innocent means of escape, which enables the hero to continue to appear as a good person. Once transformed, the protagonist is able to renounce all of his duties, without being obstructed in his plan by guilt or the sense of responsibility towards his family. Furthermore, the metamorphosis can be interpreted as a very eloquent metaphor for the split self: the repressed contents of the subconscious return in a monstrous shape to haunt the conscious ego of the main character.

However, while this transformation does bring with it the fulfillment of Gregor’s most ardent wish, it also punishes him at the same time. Sokel argues that this interpretation of the short story is supported by the dreamy appearance of the whole experience and by the fact that the metamorphosis takes place at dawn, in Gregor’s sleep. In an attempt to ward off the unpleasantness of his obligations, Samsa abdicates from his role as a provider for his family, giving this role back to his father.

Significantly, it is his father that eventually causes Gregor’s death, further supporting the Oedipus element in the story. Sokel thus analyzes Kafka’s Metamorphosis as a literary piece which demonstrates a profound understanding of the subconscious workings of the human mind. Charles Bukowski’s poem, My Old Man, is a seemingly inarticulate rant about a significant event in the life of its narrator. This significant event interestingly marks the only moment in which the narrator ever felt close to his own father.

In his collections of essays entitled How to Write a Poem, critic John Redmond reveals the way in which the poem manages to convey its message in an unusual form. As Redmond observes, the poem contains no similes, metaphors or images, its style being deliberately impoverished and plain. Moreover, the language in the poem is inarticulate and clumsy, with no notable endeavor to express or be eloquent. The only elements that do animate the poem are the four distinct voices or presences: the younger self of the author, the narrative voice in the present, the mother and the father.

The critic suggests that this technique serves to give an ironic portrayal of a significant event and thus play down its importance. The poem is laden with the tension between the father and the son, which is ineffectually mediated by the mother. Significantly, the only moment of relative closeness between the two occurs when the father reads one of the son’s short stories and seems to find meaning in it. As Redmond shows, this tension is effectively disclosed in the gap which is created between what the voices actually say and what is said of them.

The Oedipus Complex in Oedipus Rex, The Metamorphosis and My Old Man. (2016, Sep 22). Retrieved from https://studymoose.com/the-oedipus-complex-in-oedipus-rex-the-metamorphosis-and-my-old-man-essay 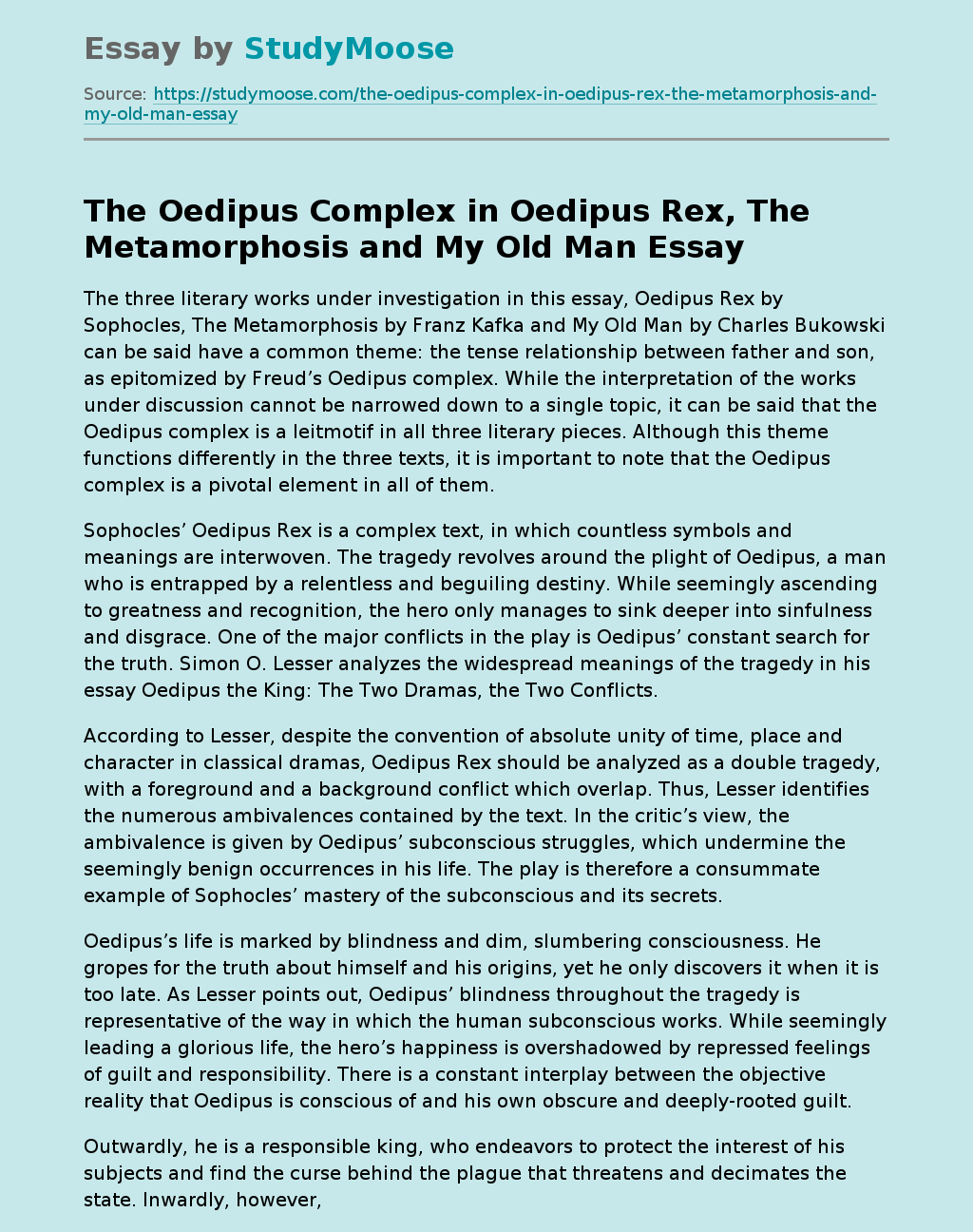