Everyone has a moment toward the end of their life where they can finally reflect back on their life as a whole, but that moment is not the most important. Throughout everyone’s life, we are all constantly searching for one common thing; Justice. In terms of justice, I’m referring to the search of finding out who you really are and what is your purpose. Oedipus Rex had a turn in his life which forced him to search for justice and find out who he really was.

Don't use plagiarized sources. Get your custom essay on
“ Oedipus Rex Life and Justice ”
Get custom paper
NEW! smart matching with writer

Oedipus Rex was a simple, yet noble man who had became a king. It wasn’t until years later that he would begin his search for justice that would ultimately change his life.

Throughout the story, Oedipus searches for a murderer of a past king, but as the story unfolds, he starts to question himself. He begins to wonder who he really is due to lack of information about his very own life.

Oedipus’s search for justice brings him an understanding of completeness and shame. Justice in Oedipus’s eyes means that he can understand where he came from and realize the truth. All of Oedipus’s life has been one big cover-up of his true identity. Oedipus’s life was cursed, starting out when he was just a little boy. As a man, Oedipus gains more knowledge and power and is able to uncover the deep and dark truth.

In Oedipus’s search for justice, he learns who his true parents are, where he was born and what happened to him from being a boy to becoming a king.

I could actually say that Oedipus’s search was successful, although it was horrific. During Oedipus’s life, he tried to live a life dedicated to his family and his people. He stood by his fellow Thebans and tried to always listen and do what’s in the best interest for them. However, living a life trying to do what’s right is never easy when you are destined to commit heinous crimes. Oedipus finds out during his search that he is the killer in which he is in search of.

After learning of this news, Oedipus finally starts to see the big picture and learn about his identity as a whole. Oedipus learns that he was also the son of the king who he murdered, but couldn’t realize it due to being sent away as a little boy and left for dead. The news gets worse when he digs deeper and sees that he has in result married his mother and fathered children with her. Oedipus learns of these new discoveries and can realize the truth which he has been sheltered from his whole life. Sometimes the truth can be too much to bear, and justice comes with a price.

Oedipus felt ashamed and horrible about just now finding out his true identity and how his actions now are unmoral. Oedipus blinded himself and believed that his actions and crimes couldn’t have been justified any other way. His actions were a symbol of how he has been blind all his life, yet he had eyes; but now he is literally blind and can see the truth clearer than ever. Life is a search for Justice has been perfectly shown in Oedipus Rex. Oedipus was just an example of how many people can go their entire life without ever knowing the truth about their identity and living a big lie.

Oedipus needed the help of many Thebans to accomplish his goal. I believe that everyone in life needs that connection between other people to figure out their past. No one can learn about themselves without the knowledge of older people who have been around to see you develop. In reference to Oedipus, he pulled together with a group of people and conducted his search for justice. Even though his search brought him tragic news and a complete change to his life, he now knows the truth about himself and his past. 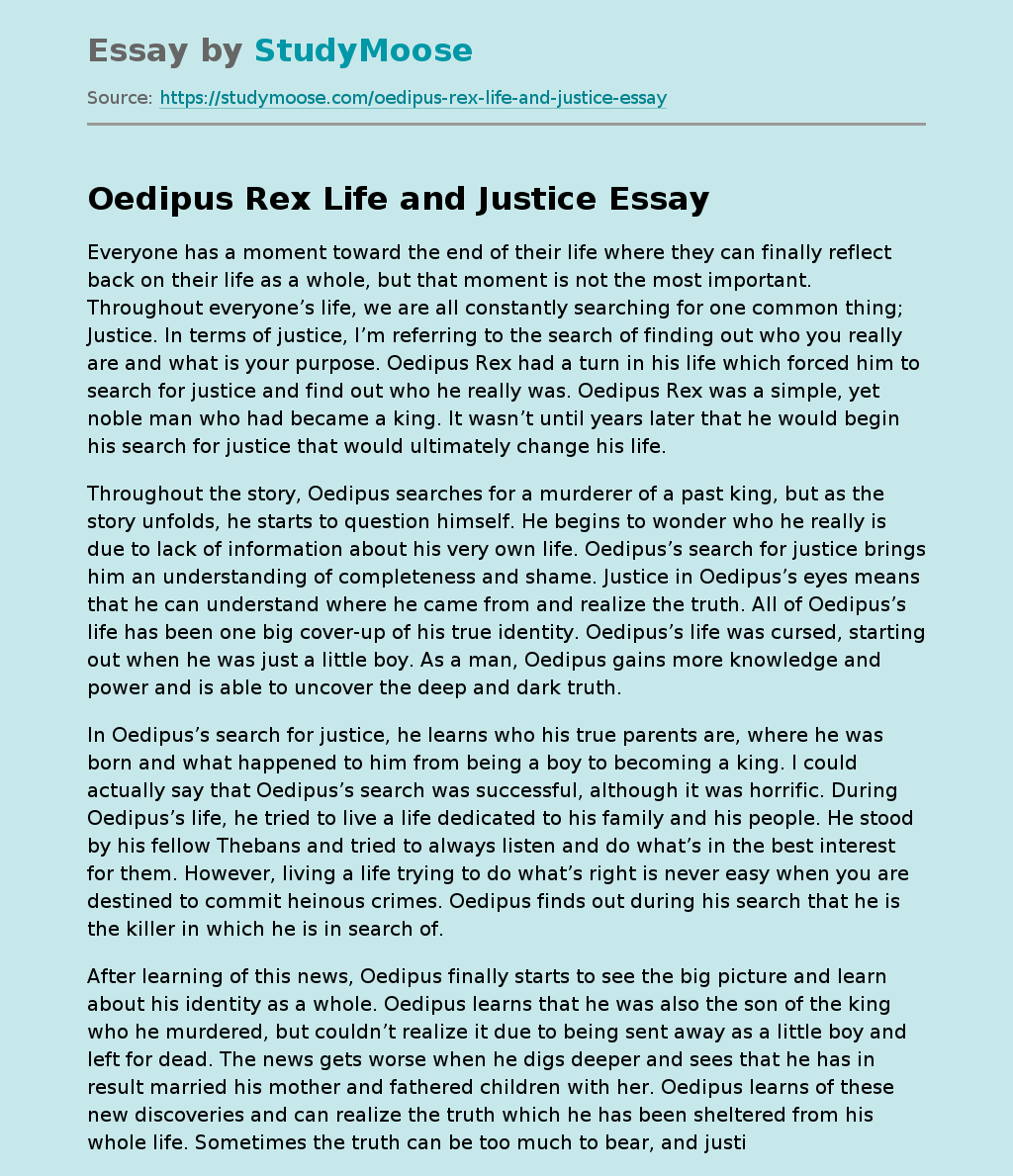