Oedipus Rex and Plato’s Allegory of the Cave: The Illusion of Reality

Sophocles was known for his emphasis on the individual’s uncompromising search for truth, particularly in “Oedipus Rex. ” In Plato’s “Allegory of the Cave,” he, similarly to Sophocles, illustrates man’s pursuit of truth and what that means. Plato suggests that truth is subjective to each man. But what is truer? What is illusion and what is reality? Just because something is illusion for one man does not make it falsehood for the other. “To them, I said, the truth would be literally nothing but the shadows of the images” (Plato).

Don't use plagiarized sources. Get your custom essay on
“ Oedipus Rex and Plato’s Allegory of the Cave: The Illusion of Reality ”
Get custom paper
NEW! smart matching with writer

The story of Oedipus offers a lot of examples of the philosophy that Plato poses in his dialogue.

In both works, the men first had to realize their ignorance before they could begin to acquire knowledge and true understanding of the complexities of the human condition; Oedipus in a literal sense and the man in the cave in a more theoretical sense. Oedipus discovers, after piercing out his eyes, that he has finally arrived at the truth of his life and that he now has a responsibility to share his story with his children, extended family, and citizens.

And in Plato’s “Allegory of the Cave,” the prisoner’s difficulty discovering the truth lies in his unfortunate restricted life within the cave.

And when he escapes, he feels compelled to enlighten others with the newly found truth he has stumbled upon. “And when he remembered his old habitation, and the wisdom of the cave and his fellow prisoners, do you not suppose that he would felicitate himself on the charge and pity them? ” (Plato) “Oedipus Rex” and Plato’s “Allegory of the Cave” are works about truth and falsehood, about sight and blindness, about light and darkness; all of which represent the great divide between illusion and reality.

Oedipus is blinded by the illusion that he has fled his fate, having overcome the prophecy.

He thinks he has escaped his parents, and this illusion is his reality. Throughout the play, Oedipus utters curse upon curse onto himself without knowing because he refuses to see reality of the harsh truth before him. The contrast between what is truth and what is falsehood is a prominent theme throughout both classical works. Oedipus is on the search for truth, no matter what the cost. He finds truth to be a worthy cause, no matter what harsh realities it may show them. The emphasis on truth is seen with more clarity in the dialogue between Oedipus and Teiresias.

Oedipus rages at Teiresias for speaking out against him by dictating Oedipus’ fate. Oedipus yells, “Can you possibly think you have some way of going free, after such insolence? ” Then Teiresias replies, “I have gone free. It is the truth that sustains me. ” Oedipus retaliates, “It seems you can go on mouthing like this forever. ” Teiresias then concludes by saying, “I can if there is power in truth” (Sophocles 889-890) Teiresias, a blind man, takes consolation in the truth, despite the harshness of the reality. Oedipus, though initially enraged at this proposition, then starts to understand its importance and power.

The Situation in Plato’s Work

This situation is very similar to what is seen in Plato’s work. The prisoner is bound by the illusion of his false sense of comfort and security. When he is released and emerges from the cave, he is overcome by the power of the light of the sun. “The glare will distress him, and he will be unable to see the realities of which in his former state he had seen the shadows… Will he not fancy that the shadows which he formerly saw are truer than the objects which are now shown to him? ” (Plato) Plato’s proposition of man’s reaction to new and better truths, despite the harshness, almost perfectly parallels Oedipus’ reaction.

And even the irony of when the prisoners mock their fellow inmate for being “delusional” in his lack of belief in the realities of the shadows parallel the relationship between Oedipus and Teiresias. Oedipus, after being told the reality by Teiresias says, “You child of endless night! You cannot hurt me or any other man who sees the sun” (890 lines 156-157) Oedipus is blinded by his illusions and perception of what is reality. There is blatant irony in the contrast of sight and blindness in Sophocles’ play. Oedipus, while being able to physically see, is indeed blinded to reality.

Teiresias, who is physically blind, sees the reality and accepts it and attempts to spread that reality to Oedipus who is obstinate to see. Teiresias rebukes Oedipus in his mockery saying, “You call me unfeeling, if only you could see the nature of your own feelings… Listen to me. You mock my blindness, do you? But I say that you, with both your eyes, are blind. You cannot see the wretchedness of your life” (Sophocles 890-891). This sight of the reality, the truth, is represented in Plato’s piece by the emerging out of the cave into the world.

Obtaining sight happens, as Plato puts it, with the “mind’s eye” and the “bodily eye. ” But this conversion from being blind to being able to see does not happen to everyone and not very easily. Plato argues that the capacity of sight is in the soul already, the eyes of the mind just need to turn from darkness to light in order to see the world. “… the instrument of knowledge can only by the movement of the whole soul be turned from the world of becoming into that of being, and of learn by degrees to endure the sight of being, and of the brightest and best of being, or in other words, of the good” (Plato).

The transition from blindness to sight, darkness into light, is not a quick or easy process. It is harsh and requires determination and a strong, intellectual mind. After Oedipus is brought into the light of reality, he longs for the time he was not burdened with the harshness and misery reality brings: he wants to return to darkness, returning to the security of his illusion. “If I could have stifled my hearing at its source, I would have done it and made all this body a tight cell of misery, blank to light and sound: so I should have been safe in a dark agony beyond all recollection” (lines 159-163).

The darkness of the cave and the power of the light outside of it is the most vivid picture painted by Plato in his allegory. He then continues, taking the allegory to the next level: “the prison-house [cave] is the world of sight, the light of the fire of the sun, and you will not misapprehend me if you interpret the journey upwards to be the ascent of the soul into the intellectual world according to my poor belief…” (Plato) Plato is saying that the material world we live in is not the fullest reality.

We live in a world that is but shadows of the fuller reality we cannot see. In the context of Plato’s world, Oedipus, then, at the end of the play is still stuck in the next level of illusion. That is why he is so depressed. He has lost all of his “sensual pleasures” that Plato warns humanity about, and Oedipus is thus left feeling hopeless and lost – in darkness. The complexity of these two works is enormous and poses questions which seem almost unanswerable. Yet they complement each other very well, as you would expect given their mutual classical background.

Allegory of the Cave

They both address the same characteristics of life and human nature: truth and falsehood, sight and blindness, and light and darkness, all tied together by a theme of the seemingly relative divide of illusion and reality. Both works put an emphasis on the importance of truth and it’s always worth it, no matter what the cost. There are different types of sight: bodily and mental. It seems that in order to have stronger mental sight, it is better to be bodily blind as seen with Oedipus and Teiresias.

Escaping from the darkness into the light is escaping the illusions that the world and you yourself have created. The individual, according to Plato, “must have his eye fixed,” so that he may, in the world of knowledge, see the idea of good, which is seen only with effort and with a wisdom which “more than anything else contains a divine element which always remains…” Sophocles and Plato both see there is something missing in the reality of our world.

There has to be more to this reality, we, therefore, must be living illusory lives and we need to emerge from the cave. If we do not, we are confined to a life lacking of meaning, true knowledge, and purpose. Thus the picture we have of Oedipus at the end of the play: stuck in a life which is full of falsehood, blindness, darkness, and is… an illusion? Alas for the seed of men. What measure shall I give these generations that breathe on the void and are void and exist and do not exist?

Who bears more weight of joy than mass of sunlight shifting in images, or who shall make his thought stay on that down time drifts away? Your splendor is all fallen… O Oedipus, most royal one! The great door that expelled you to the light gave at night – ah, gave night to your glory: as to the father, to the fathering son. All understood too late… For I weep the world’s outcast. I was blind, and now I can tell why: asleep, for you had given ease of breath to Thebes, while the false years went by. (911-13 lines 1-9; 32-36; 49-53)

Oedipus Rex and Plato’s Allegory of the Cave: The Illusion of Reality. (2016, Dec 01). Retrieved from https://studymoose.com/oedipus-rex-and-platos-allegory-of-the-cave-the-illusion-of-reality-essay 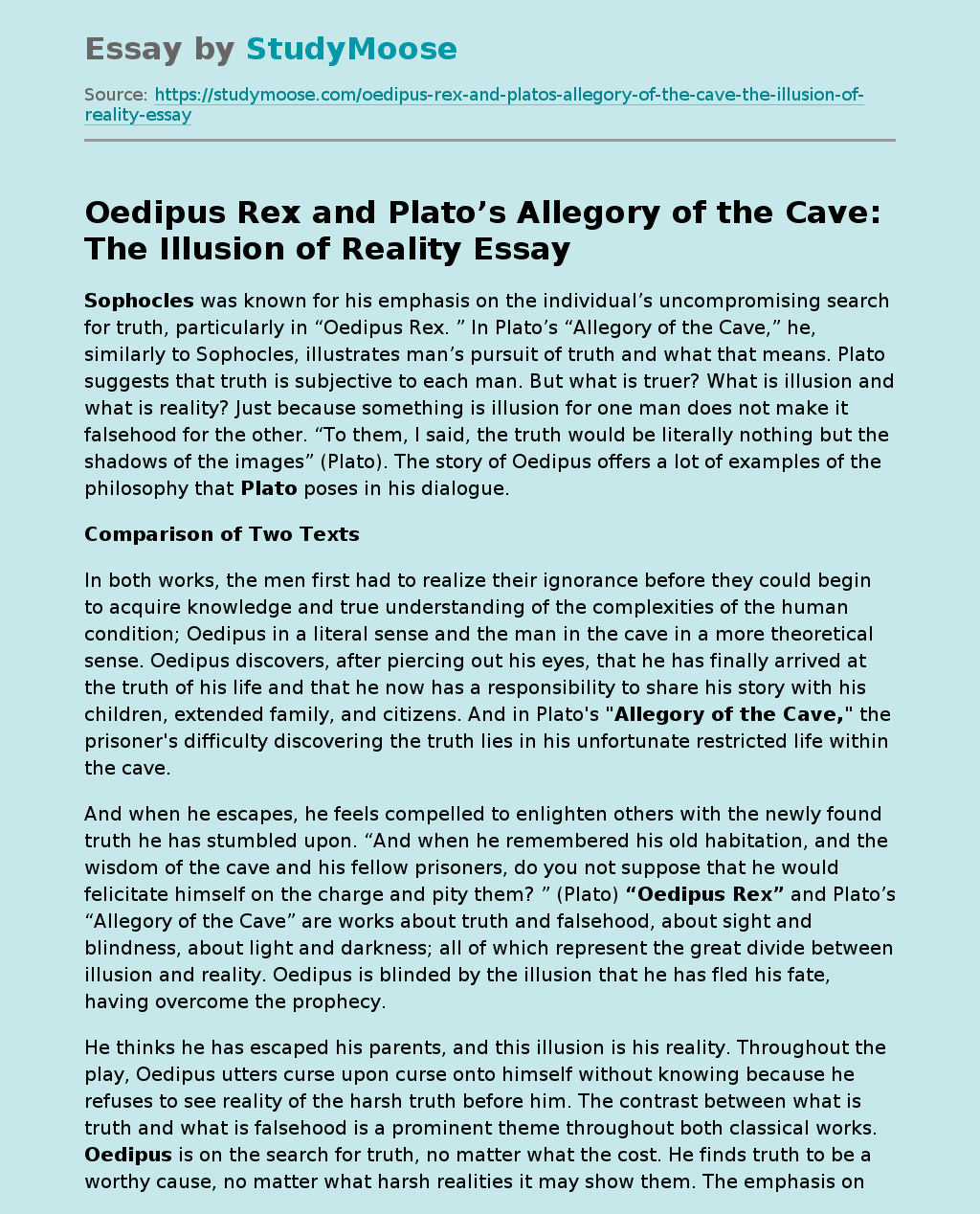