Reflection About Platos Allegory of the Cave

The most important thing you can do is: ‘ Know thyself’, practice self-reflection, learn more about yourself than what you believe you are.

Here I will go further:

The material world is largely an illusion, it is always changing. By just looking at it, one cannot learn anything.

Don't use plagiarized sources. Get your custom essay on
“ Reflection About Platos Allegory of the Cave ”
Get custom paper
NEW! smart matching with writer

There is also another world: an eternal world of ideas.

It is made up out of eternal unchanging forms of things. This world can be known through reason alone. The material world (world of things) is a manifestation of this eternal world of ideas.

Using the allegory, Plato pictures the everyday situation of man. He can speak, hear, and encounter the world without actually being aware of the world of Ideas.

The beliefs are man’s knowledge of individual things, which may sometimes be true but is often times false because individual things are constantly changing. The world of ideas, on the other, can be divided into “reason” (the lower part of the region) and “intelligence” (the higher part of the region). Under reason is the knowledge of things like mathematics. And under intelligence is the knowledge of the highest and most abstract categories of things, for example, understanding the ultimate good.

Here are some examples that I want to give:

– the idea of giving: ‘when you give something to a person, you create a bond between yourself and the other’; the other shows you gratitude for your gift. BUT in real life (material world) it can be so that a particular person has had some nasty experiences with giving presents (some people aren’t that gratefull) and therefore creates an aversion for ‘giving’. He has formed a wrong ‘opinion’ about the idea of giving.

– Poker hands: in poker KK is a very good hand, this is mathematically so. Some pokerplayers however lost a lot of chips with this hand, because an Ace fell on the table. This means that in the future they will tend to misjudge their hand (because of their experiences with it) and underestimate it (contrary what is known in probability theory)

– fear of snakes: you start panicking because you thought you saw a snake in your yard, but it is only a garden hose. When you return you see the truth, it was your own fear that gave you a misjudgment.

– The entire idea behind science is basically based on this: instead of assuming certain things to be true, scientist tend to do a lot of research and experiments before they will claim a theory about something.

In a real situation you should discard your own opinions and strife for the truth. The truth will hurt (just as staring in the flame). It wil hurt you AND others. It is in part conquering your fears, and be open minded in all situations. Questioning yourself always is truely a hard task. (many who have left the cave, came back because it was just too difficult living in the light of reason)

Reflection About Platos Allegory of the Cave. (2016, Nov 02). Retrieved from https://studymoose.com/reflection-about-platos-allegory-of-the-cave-essay 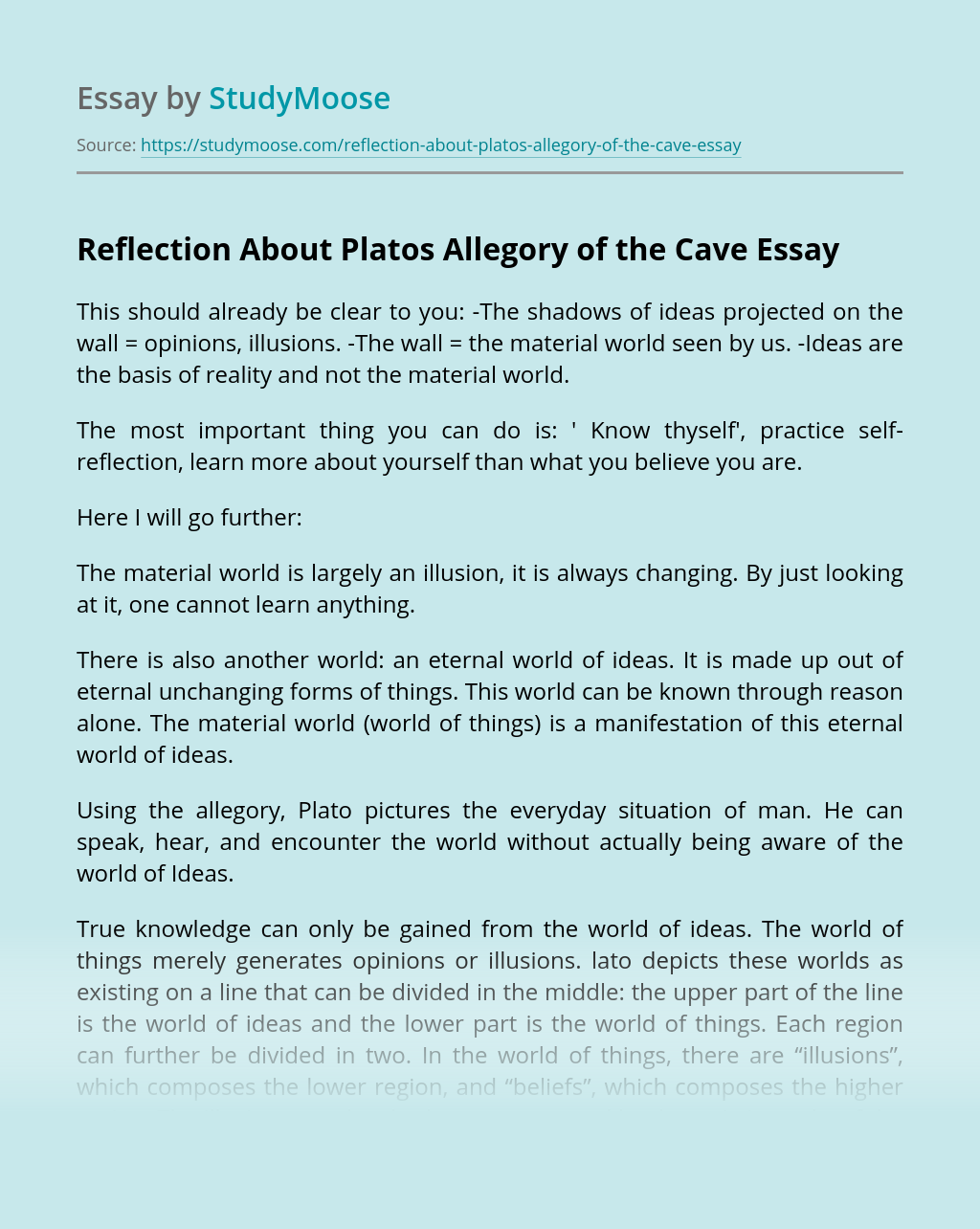