Plato’s Allegory of the Cave and the Non-Material World

The Allegory of the Cave, a dialogue from the Republic written by Plato, is both an existing explanation and reliable representation of the growing and ever present ignorance to the enlightenment of the majority of humankind. This paper will present Plato’s meaning of enlightenment and how it is related to Plato’s Non-Material World. Plato’s brief background will also be highlighted including some assumptions on how and why he acquired such a world-changing insights leading to the creation of his dialogues.

Don't use plagiarized sources. Get your custom essay on
“ Plato’s Allegory of the Cave and the Non-Material World ”
Get custom paper
NEW! smart matching with writer

This discussion will inevitably cross another famous philosopher – Socrates – and his influence on Plato.

Then a simple but thorough analysis of Plato’s Allegory of the Cave will be dealt with using real life knowledge to each and every symbolic act inside and outside Plato’s Cave which will also spontaneously discuss certain aspects of human life, like how a man is unconsciously bounded to his self-made limitations. It will mainly focus on the actual dialogue between the characters of the story, Socrates and Glaucon.

Lastly, this paper will examine Plato’s intention in writing the Allegory. Plato, Socrates and the World Changing Insights

Plato, born from an aristocratic and prominent family in Athens, had a promising future in the field of politics. But later in life, after witnessing the unfairness in the trial and death of one of his friend and mentor, Socrates, Plato realized that political reform in Athens was completely out of his control. Maybe if Plato had not met Socrates he might have pursued a political career after all.

Plato then subsequently dedicated his life to the study of Philosophy and political theory (Kahn, 1989, p. 293). Plato’s loyalty to his mentor was seen in his dialogues. We might not even know Socrates if it wasn’t for his student.

Because of Plato’s loyalty, Socrates became one of the key characters on his dialogues. Scholars argued about the extent of this loyalty. Some pointed out that the dialogues were a faithful portrayal of Socrates; some argued that although Socrates’ habits and mannerism might be accurate, the philosophies came directly from Plato himself (Kahn, 1989, p. 293). Whether the Philosophies came from Plato or not, we cannot deny that Socrates contributed his fair share of insight to the young Plato, especially when he was the one who taught Plato the value of philosophical examination of moral and political opinion (Deighton, 1971, p. 56).

As a metaphysician Plato presents a mental representation of an unchanging place in contrast to the ever changing ways of the material world (Kahn, 1989, p. 294). Plato formulated this idea, or rather believed this idea, and conceived a world of Forms so that the soul could be trained to turn away from the empirical pseudo reality of the changing world. The only objects of knowledge were the Forms – a theory entailing that nothing which could be perceived could be known. Plato would later give issue to the importance of studying Mathematics; an abstract concept that doesn’t exists physically but holds true to our daily life.

The concepts of the Non-Material World and the Forms were also emphasized in one of his dialogues: The Allegory of the Cave. The Cave and the Prisoners The Allegory of the Cave was a brilliant representation of a human’s mind’s awakening from a comfortable ignorance to a painful enlightenment. Plato believed that there exists a Non-Material World where all Forms are present. By saying the Form, Plato was referring to the intangible world where the real objects exist (Cohen, 2006). Everything in this world was just an imitation of the real thing.

The characters of this dialogue were Socrates and Glaucon, Socrates’ young follower in the story. In the beginning of the dialogue, Socrates carefully presented his story by describing the location and situation of the cave, which was underground and had an opening in the direction of the light (Ebenstein, 2000). There were people living inside this cave, and they were here ever since they were born. They were overly chained to the extent where there was no way they could turn their heads around. Their field of vision was limited to the extent of the wall only. Fires were lit above and behind them.

There were also puppeteers and men carrying different sorts of instruments behind them. The puppets and instruments cast shadows on the wall. The chained prisoners deduced that the sounds were probably coming from the shadows – where could it possibly come from? The shadows were the only thing they knew. Upon analyzing this part of the story, we can say that Plato was trying to interpret the ignorant state of the world in the form of the cave. The walls of the cave set the frontier of what the prisoners see and understand. It is the boundary of what they believe. Nobody questioned what lies beyond that wall.

For them, there is absolutely nothing beyond it. But of course, they are not aware of their own ignorance. They don’t even recognize that they had unconsciously situated their own limitations. They were confined inside a box, a box where they unknowingly refused to leave. Imagination stopped upon the wall. In real life, the chain that binds the prisoners is the society and its norms. The society sets rules and laws that prevent those not brave enough to make their own analysis of the world. The prisoners represent untutored and misled minds; such people knew nothing of the source of the shadows (Cohen, 2006).

Combining the above arguments, we can articulate that most of us are prisoners of our own world. The Unchained Prisoner The story continued when Socrates introduced the concept of freedom. One of the prisoners was unchained and forced to see the things that were just behind him all his life. At first he was bewildered, not to mention the exertion of straining his eyes was excruciating. It was hard to absorb all of things at once; but given the time and effort, he saw and realized in full light that the shadows on the wall were just inaccurate imitations of the real things (Ebenstein, 2000).

Then he was led outside the cave to see a different source of light, the sun, and similar to his first struggle, he experienced pain upon his eyes while observing it. After adjusting to this whole new world, he then slowly grasped the glaring truth: the source of the shadows came from this wonderful world. The great enlightenment began. What was the force that led the man to the path of enlightenment? In real life, it is the experience and the struggle. The lessons a person learned from his problems help him to be humble and look past his limitations. He doesn’t ask for his problems.

Problems come naturally to him; this sets the similarity between the literal freedom of the prisoner and the freedom of a person’s mind: they both lead to the source of light. The process by which he faces the tribulations is painstaking and agonizing. He may not be able to withstand it, but because of his open mind and flexible imagination, he will surpass this stage (Cohen, 2006). Going Back Inside the Cave Upon recovering from his utter shock, the unchained man remembered his fellow prisoners. He quickly went back to the cave to deliver the news. But his sudden trip back from light to darkness was so much for him.

He was completely unprepared for another painful adjustment of sight. But even though he was experiencing such a difficulty, he still informed his comrades what he saw. He told them everything. Nobody believed him though. Plato emphasized another important thing in this part of the story: a person cannot completely see the light by just turning his soul, the body must also follow. Since the other prisoners don’t have the ability to turn their heads around, they couldn’t see the truth that the unchained prisoner was trying to reveal. They would see him as a deluded man. They assumed that his exploits had done nothing good to his reasons.

They wouldn’t hear his explanations neither would they wish to free themselves. But subconsciously, they were also afraid to believe him. What if all of the things they have done were nothing but nonsense? So they hid inside their own boxes even though they were already given the opportunity to explore more of life. They were afraid of the truth because truth might hurt them. Aside from Socrates, there was another philosopher who was faced with the same treatment. He was Confucius, a Chinese political figure whose influence had reached even the other side of the globe (Riegel, 2006).

Although Confucius’ concepts were wildly accepted today, back in his time almost everybody, save his followers, refused to consider his teachings. If it wasn’t for the faithful endeavor of his followers Confucius would just be a random name in the street. Socrates and Confucius are blessed with good followers. Plato’s Intention in Writing the Allegory Plato, like any other person, was born with an ignorant mind. But because of the life changing events of his life, i. e. the death of his childhood friend and mentor, he was bound to alter his way from seeing the material world to conceiving the Non-Material world.

Plato may either be referring to Socrates’ or his own awakening. The freed prisoner might either be him or his mentor. But if he wasn’t a freed man himself he wouldn’t be able to accurately and astutely describe this state of enlightenment. In Plato’s works, he described a hierarchy of occupation, the Philosopher King being the highest. A Philosopher King must posses a deep and thorough understanding about the Forms, and therefore from the title itself must be a superior philosopher (Ebenstein, 2000). In the Allegory of the Cave, he was simply giving a very good analogy of a philosopher’s awakening to the truth.

So far, this paper discussed Socrates’ major role in Plato’s works. The injustice of his death widened Plato’s understanding about the world’s limited view of the physical world. Here, the meaning behind the Allegory of the Cave was discussed. Being able to see and understand the Non-Material world helped us understand Plato’s interpretation of enlightenment. A person’s struggle to solve his physical, psychological and especially spiritual problems uplifts his understanding of the Forms. Then Plato’s intention in writing the Allegory was examined using his concept about the Philosopher King.

Plato’s Allegory of the Cave and the Non-Material World. (2016, Nov 22). Retrieved from https://studymoose.com/platos-allegory-of-the-cave-and-the-non-material-world-essay 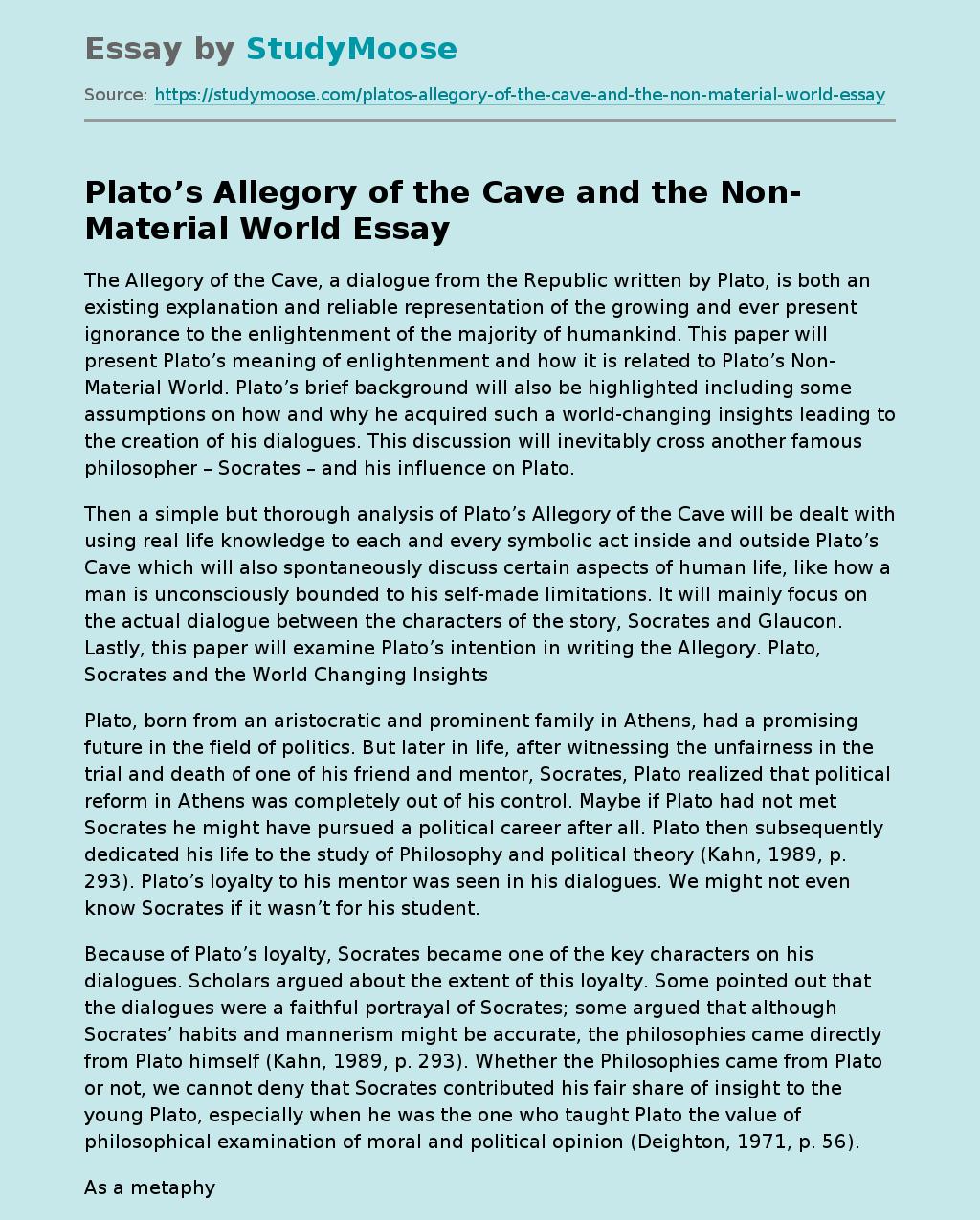