Analysis of Plato's Allegory of the Cave

The Allegory of the cave is an allegory written by Plato with the purpose to represent the way a philosopher gains knowledge. This allegory is a fictional dialogue between Socrates and Glaucon, where Socrates compares the issues appearance vs. reality, education vs. ignorance. There are two types of knowledge represented in this allegory, the one that is told and expected to be believed and accepted; and the one that is learned by a person’s own experiences through life. The writing is organized in a way in which the author tells a story in a sequence of logical events that makes the reader understand better.

Don't use plagiarized sources. Get your custom essay on
“ Analysis of Plato’s Allegory of the Cave ”
Get custom paper
NEW! smart matching with writer

It wasn’t really clear for me the way he described the scene metaphorically and it was difficult to visualize the scenario to realize the purpose behind it because of the rarity of it. That’s why I went through it so many times, but once I was able to understand what was going on and where the point was, I could see that the way he explained and the fanciful evidence he used was very strong.

Plato writes about Socrates describing a scene where there are chained people in a dark cave.

They have been there since their childhood and they can barely move their heads. Behind them, at the distance, there is a blazing fire, and between the fire and the prisoners there is a wall meant for objects to pass. Because of their limited vision (lack of movement), those men can only see their own shadow and the shadow of different sculptures that pass over the wall, which are carried by other men they can’t see.

One of those prisoners is released and starts walking around the cave. He is very confused by what he sees but finally he realizes that the shadows are just a representation of what is really there. The prisoner is forced to go out of the cave, his eyes begin to adjust to the sun light, and he can’t look at anything more than shadows. Accustomed to the light, he begins to see other objects like trees, flowers and houses; and he realizes that the perspective he had about the world was completely different from what it really is.

Finally the prisoner comes back to the cave to convince the others about the existence of the things he saw. Accustomed to sunlight, he sees blurry shadows, making others laugh, and they would remark that it would have been better, if he had stayed in the cave, and if someone tries to release another prisoner, that person should be caught and put to death. Plato’s main idea is to reflect the different stages and the process of education, how a philosopher can reach the top and become enlightened. In this allegory the chained men symbolize the most erroneous and ignorant people. The released prisoner who confuses fake objects and the fire with reality, and has not even left the cave, symbolizes those people who feel awkward about the process of knowledge and who are not ready to confront it. The released prisoner that comes out of the cave and tends to return, represents the man accustomed to the error, who doesn’t recognize the truth even when it is in front of him, and is afraid to leave their past views. When he comes out, and he only sees the shadows and the reflections of natural things, those actions symbolize the process of adaptation and preparation.

The final process, where he becomes enlightened, is represented when the now ex-prisoner is able to reason the Sun as the cause of all things. Returning to the subject of the types of knowledge, these two ways of thinking referred to by Plato represent two completely different aspects of us. That kind of knowledge where the person’s belief is based on what he/she can see or hear due to his/her lack of education is evident when the people in the cave see the images on the cave wall created by the puppets and figures with the fire and hear the echoes. These people would label things as reality solely because they believe what they are being told. This type of knowledge is based on “truths” without any type of personal connection. The second type of knowledge, which is based more on learned life experiences, is evident in the released prisoner who discovers the real world through his own experience. Another important point about the allegory is the uses of certain words which have a particular meaning in the story, making the reader push themselves to understand the greater meaning behind his words.

Some of those words are shadow, cave, fire, prisoners, voices and light. The word prisoner refers to ourselves, arguing that we are prisoners of our own beliefs. The cave is the virtual prison made by ourselves because of the ignorance behind our minds. The word shadow, represents an illusion of reality, a false vision of the truth, are those false ideas created by the lack of knowledge that people live by in this world. The fire, in my opinion, is what produces the false reality or world of appearances. The voices represent the authority; those things we believe are true just because someone told us, like a teacher in a classroom, the government in a country, your parents at home, etc.

Finally the word light or the Sun, used to represent the ultimate truth, the answers found to those erroneous beliefs that you thought were true. I completely agree with Plato and I think we can apply this logic to many equations we face in life as intelligent, moral and empathetic people. I learned that people see reality as the visible world when reality really is more than the visible world. This text helped to push me along the way because it is directly related with college life, where a successful student is the one who considers that his/her mission is questioning and challenging the authenticity of those things that we believe are true.

Analysis of Plato's Allegory of the Cave. (2016, May 16). Retrieved from https://studymoose.com/analysis-of-platos-allegory-of-the-cave-essay 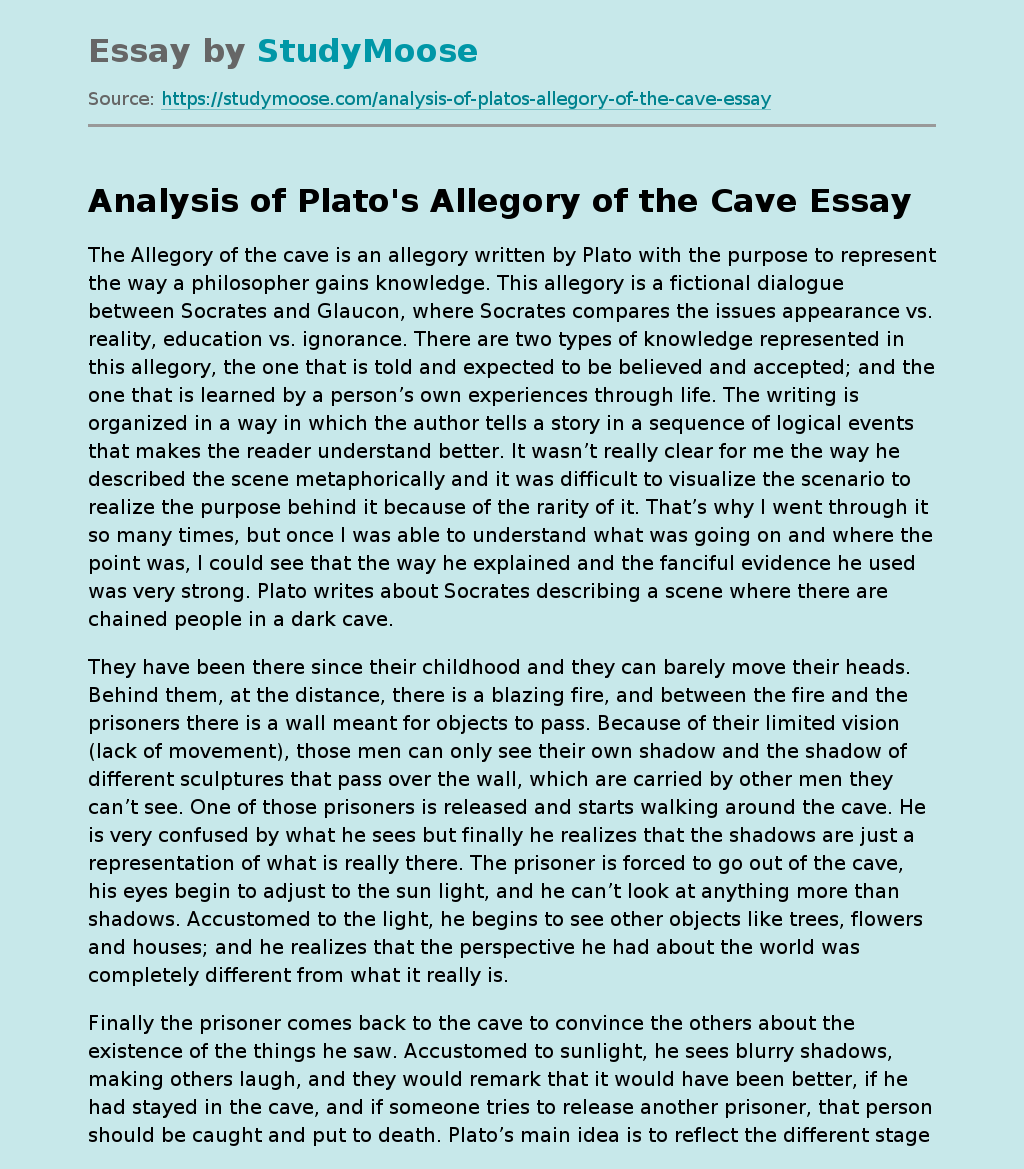