The cave taping that we listened to in class was a metaphor that contrasted real life and the things that we believe to be true. In the tape, Plato has Socrates describe a group of prisoners who are chained to a wall of a cave. They are facing a bare wall, watching the shadows that are cast from objects passing in front of a fire. The imprisoned people believe that the shadows are real and give them names. The named shadows are the prisoners’ reality so, it is only right that they believe that they are real objects.

Don't use plagiarized sources. Get your custom essay on
“ Plato’s Allegory of the Cave: Life Lessons ”
Get custom paper
NEW! smart matching with writer

If given the chance, the prisoners of the cave may never want to leave their prison because, it’s familiar, the life that they are used to. When the prisoner finally does manage to break his chains, he realizes that reality was not what he had thought it was at all. The objects he is seeing are not real physical objects are all, they just appear that way because that is what they want him to believe.

He discovers hat the sun was actually the source of light and not the fire. The fire that cast light on the walls of the cave gave the illusion of sunlight, causing the reflections.

After he realizes that the sun is the actual source of light that creates the shadows on the wall, he questions his reality. The prisoner comes to realize that he only thought the fire was the actual light source because that was all he had prior experience with.

With the fire out of his sight, he could now see the true form of reality rather than the fake manufactured one, which was the shadows. Overall, I think the story was saying that we as humans can’t free ourselves from our state of mind, just like the prisoners who could not free themselves from their shackles. If we were able to escape the made-up reality, we would find a world that we could not understand. For example, once the prisoner escapes and the facade is realized, the reality is painful, making it too much for him to handle. Because of this, he immediately wants to go back to life in the cave that is familiar, pleasant and easy for him to stomach.

I wanted to compare the allegory to my real-life experiences because I found it very relatable. In this day and age, I am a twenty-two year old trying to survive. Up until about a year ago, I lived with my parents. My parents always kept food in the house, a roof over my head and I never wanted for anything. The biggest facade I have had to deal with is being thrust into the real world. After my parents decided it was time for me to live on my own, I had to deal with bills, buying my own food, and budgeting as all adults do. It always seemed like it would be easy because my parents made it seem like it was, but in reality, it is one of the most difficult things I have experienced. So, in many ways I can relate to how the prisoners chained up in the cave felt. 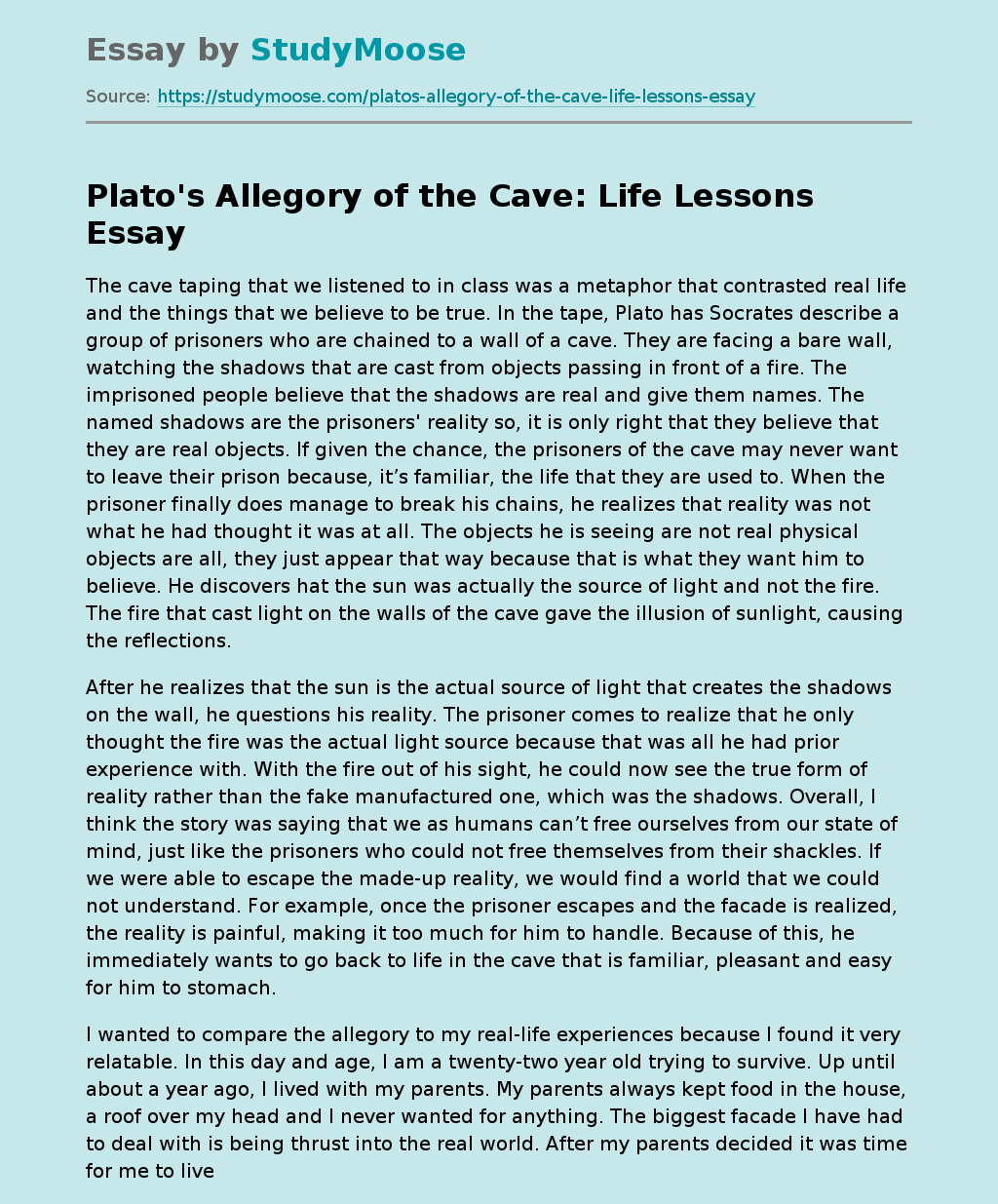