Plato was born on or around May 21, 427 in Athens. His real name was Aristocles. Plato (meaning broad) was his wrestling name. He was the child of Ariston and Perictione, both of Athenian aristocratic ancestry. He lived his whole life in Athens, although he traveled to various places such as Sicily and southern Italy on several occasions. Little is known of his early years, but he was given the finest education Athens had to offer. He devoted his considerable talents to politics and the writing of tragedy and other forms of poetry.

Don't use plagiarized sources.
Get Your Custom Essay on Plato – Short Biography Just from $13,9/Page

During Plato’s youth he met Socrates’s, a famous philosopher, and soon became his pupil. The compelling power which Socrates’s methods and arguments had over the minds of the youth of Athens gripped Plato as firmly as it did so many others, and he became a close associate of Socrates. Socrates’s was an extremely outspoken man. He believed that everyone in power should be both moral and extremely intelligent, and when someone didn’t meet his qualifications, Socrates’s would publicly insult them.

This ultimately led to his demise after he was unfairly put to death in court.

Plato was deeply affected by this and as a result never took a role in politics even though he was greatly encouraged to do so. Even after Socrates’s death, Plato continued to use many of Socrates’s thoughts and ideas. Education was always extremely important to Plato. He believed that math and philosophy to be the ultimate truths because there is always a solution to the problem. His high opinion of math probably came from Socrates who believed the same thing. Later in life Plato started the very first University in all of Europe. This university continued on for nearly 1000 years until it was closed by the Christian emperor Justinian.

The university was closed because it was believed to not follow the Christian religion. Another major accomplish of Plato’s was the many groups of writings that he completed. These mainly consisted of a fundamental belief of his, that education is extremely important for a persons moral values. Somewhere around 347 B. C. Plato died. Through out history Plato has not only been remembered as Socrates’s greatest pupil but also for his philosophical writings on education and for how he created a standard for how colleges and universities should be ran. 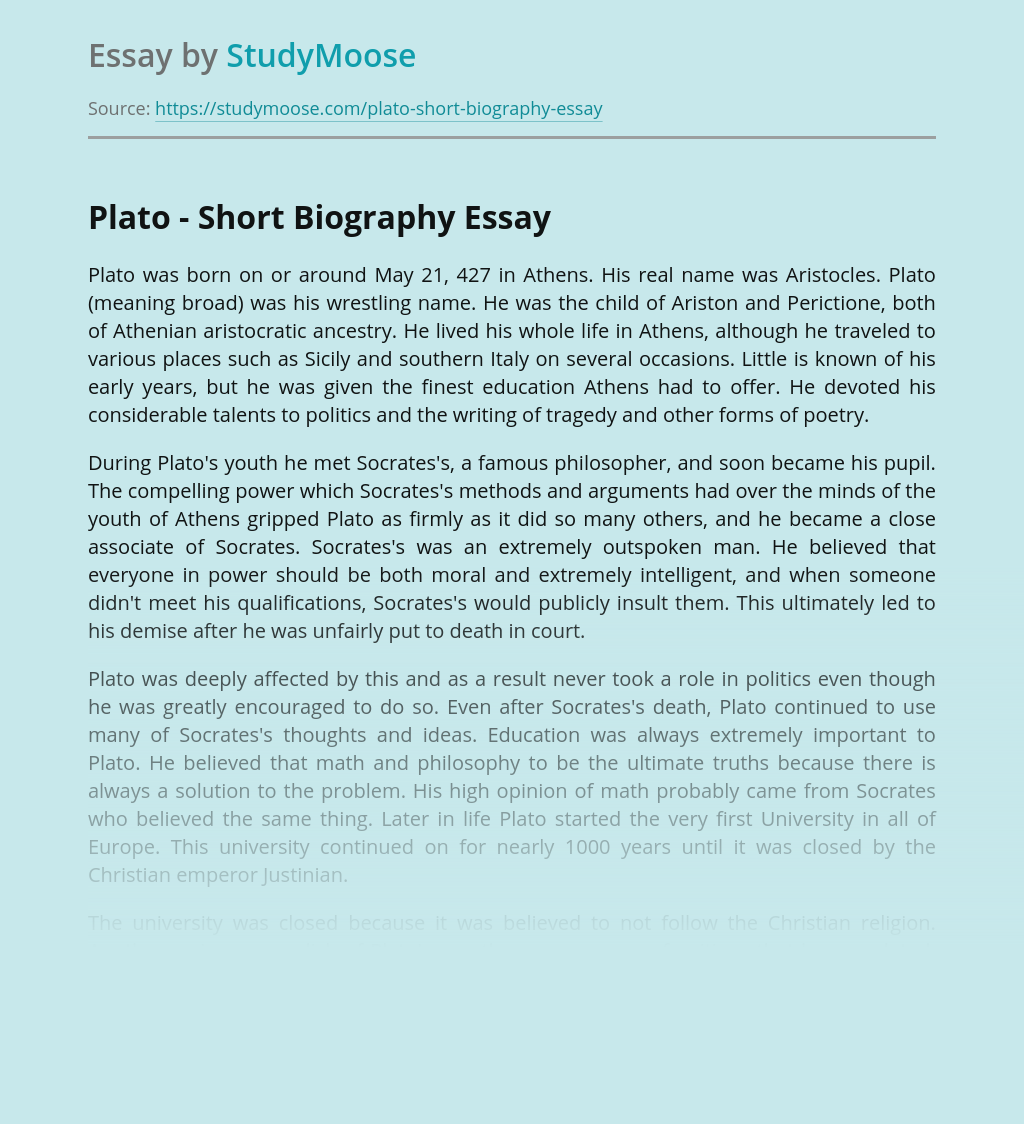 Plato was born on or around May 21, 427 in Athens. His real name was Aristocles. Plato (meaning broad) was his wrestling name. He was the child of Ariston and Perictione, both of Athenian aristocratic ancestry. He lived his whole life in Athens, although he traveled to various places such as Sicily and southern Italy...

Ancient Greek philosopher Aristotle wrote the Nicomachean Ethics, portraying the significance of studying the realms of ethics and political science. In his work, Aristotle focuses on the theme of how human beings can attain the chief human good—happiness—at which everything aims. Aristotle argues that ethics, the study of moral character, and political science, the branch...

Get Essay
Work and Play

“I have called ‘play’ either as a holiday designed to make us ‘work’ better when it is over or merely as ‘work’ of another sort” (Oakeshott). In his article Work and Play, Michael Oakeshott goes into detail about human’s desire for pleasure. Oakeshott explain that in order to achieve that “true happiness” we must work...

Aristotle’s theory of the Tragic Hero

“A man doesn’t become a hero until he can see the root of his own downfall” Tragic hero’s who fit under Aristotle’s depiction are known as ‘Aristotelian Tragic Hero’s’ and possess five specific characteristics; 1) A flaw or error of judgment (also known as ‘hamartia’ which is a fatal flaw leading to the downfall of...

These types of ethics are somewhat based on charisma. Virtue is a habit or a specific quality of a person’s character that makes him renowned in the society for being a well-behaved and morally gifted person. Personal virtue depends upon the wisdom or honesty of a being in a situation where they may be a...