Johnny Depp - A Philosopher Among Actors

“If a man does not keep pace with his companions, perhaps it is because he hears a different drummer. Let him step to the music which he hears, however measured or far away.”

In simple terms, this quote is referring to those who do not conform to the standards placed on them by their culture or subculture. In Hollywood, the way one becomes an A-List actor is by conforming to the Hollywood system: take the roles that provide the largest paychecks.

Don't use plagiarized sources. Get your custom essay on
“ Johnny Depp – A Philosopher Among Actors ”
Get custom paper
NEW! smart matching with writer

Ben Affleck did not become a superstar celebrity by following his passion; Reindeer Games and Gigli are perfect examples of that. However, there is one actor who has consistently chosen his own roles, much to the dismay of his agent, based solely on his interest in the character he will portray. This actor has never taken a role that he did not feel passionate about, regardless of the flack he received from critics or the general public, and he is now one of Hollywood’s finest.

Johnny Depp stands out from the crowd because rather than conforming to the Hollywood standard he has become an A-List actor by following his own muse, or walking “to the beat of a different drummer.”

A perfect example of Johnny Depp’s passion for his work is his starring role in the movie, “Ed Wood,” about Ed Wood, a filmmaker best known for making bad movies. It sounds ironic, but Johnny was insistent that this was a great movie. Despite, at the height of his career, being told that making this movie would ruin his professional image, he pursued the role.

The movie was made, and it went on to win an Academy Award. Another example of Johnny Depp’s dedication is the movie “Once Upon A Time In Mexico” filmed in the heat of the summer of 2002.

Because he wanted this role, Johnny agreed to film for seven consecutive days at 12-16 hours per day! A typical A-List actor will, under no circumstances, work for more than 8 hours per shooting day. Other movies that Depp was warned not to do, which went on to become successful were: “Edward Scissorhands,” “Dead Man,” “What’s Eating Gilbert Grape,” and “Pirates of the Caribbean,” for which he is nominated for Best Actor at the Academy Awards this year.

Johnny Depp is renowned for his choice of movie roles. He does not simply work for the paycheck; he is truly pursuing his passion, and he has done it quite successfully. Roger Ebert, a well-known film critic, has called Depp “a modern Thoreau – a philosopher among actors.” At the 76th Annual Academy Awards, Johnny Depp was recognized specifically for his success in taking part in only films that he truly wanted to be a part of. Considering the standards that the industry places on actors, the fact that Johnny Depp has not sold out and taken a role simply for the money, is an admirable quality. If everyone possessed such commitment in their work, and more so, such conviction, life would be much more enjoyable to live.

Johnny Depp - A Philosopher Among Actors. (2016, Jul 02). Retrieved from http://studymoose.com/johnny-depp-a-philosopher-among-actors-essay 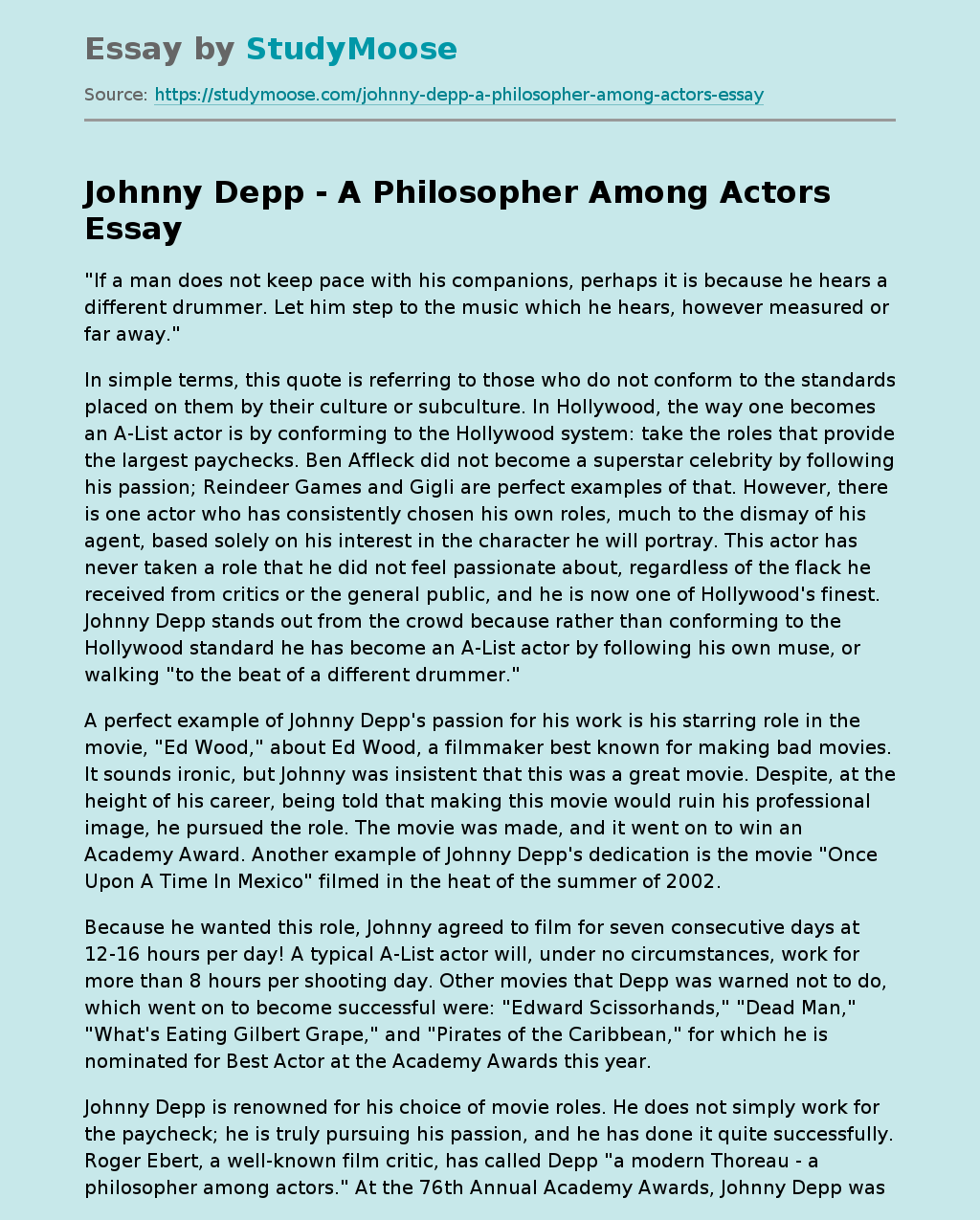