If there was one philosopher whose name could be taken as a synonym for the Enlightenment, Rene Descartes would have a strong case for being the one. His contributions to Western Civilization are vast and impressive, contributions in fields ranging from mathematics to physics to philosophy. His crowning achievements, however, are his Meditations, in which he attempts to settle once and for all the lofty philosophical questions of the existence of God and the immortality of the soul. To do this, he starts from the ground up, attempting to doubt as much about the world as one possibly can, and then attempting to deduce what can possibly be known even at this level of extreme doubt.

Don't use plagiarized sources. Get your custom essay on
“ An Analysis of the Philosopher Rene Descartes’ Argument on the Existence of God ”
Get custom paper
NEW! smart matching with writer

From the single light of certainty that is his Cogito, he proceeds to dispel the darkness of doubt and come to an even greater truth: God must necessarily exist. I do not dispute the validity of his proofs; I think they are magnificently constructed. As Descartes notes however, though the will is infinite, the intellect is not.

Descartes is limited in certain cases by an incomplete understanding of the origins of the faculties of reason. If he were knowledgeable of modern theories of psychology, he would have perhaps restructured his argument to work around the contradictions that arise from them. I will make the claim that some of his intermediate proofs, particularly the wax argument, rely on flawed assumptions of how the mind is structured and how knowledge is gained through reason, and that this somewhat weakens the following argument for the existence of God.

Before I go into detail on my objections, it is my duty to faithfully represent Descartes’ first argument for God and the assumptions and prior arguments upon which it relies. His third Meditation is where his first proof of God’s existence is proposed. Prior to this, in his first Meditation, he establishes hypothetical doubts about his senses, his existence, the reality of the world around him, and his experience of the world. He proposes various arguments for how these things can be doubted, such as the unreliability of senses, the possibility that he is dreaming, and the possibility that all of his thoughts and perceptions are being fabricated by a deceiver manipulating his mind. In his second Meditation, he tries to deduce what he can possibly know at this extreme level of doubt, if anything at all. He comes to two conclusions: first, that “I am, I exist”, and second, that “I am therefore precisely nothing but a thinking thing” (Ariew, 108-9). He comes to the first conclusion by the realization, under the assumption that a deceiver figure is manipulating his mind, that if he is capable of being deceived, he must necessarily exist. He came to the second conclusion by realizing that “thought exists” and its existence “cannot be separated from me”, whereby the conclusion that the meditator is a “thinking thing” then follows (Ariew, 109). He further defines a thinking thing as a “thing that doubts, understands, affirms, denies, wills, refuses, and that also imagines and senses” (Ariew, 110). Then, through his wax argument, he concludes that he can perceive things not through “the senses or by the faculty of the imagination, but by the intellect alone” (Ariew, 112). All of these arguments lay the groundwork for Descartes’ argument for God in his third Meditation.

In Descartes’ third Meditation, he begins with all of the conclusions drawn from the previous arguments, namely that he is a thinking thing that exists and perceives things through pure reason. Ideas can either proceed from one self or proceed from causes outside of oneself. The ideas that proceed from one self are limited in their perfection and reality, because they stem from an imperfect being. He then posits that he has a clear and distinct idea of God as an infinite, omnipotent, supremely perfect being. This idea could not have originated in himself, and had to have been caused by something outside of himself. This holds to the principle that “what is more perfect cannot come into being from what is less perfect” (Ariew, 116). According to Descartes, God is the only thing that could have caused such a perfect idea, and therefore he must necessarily exist. In a nutshell, this is Descartes’ ontological argument for God.

The ontological argument for God that Descartes presents is elegant and logically valid, in that if one assumes the premises are true, the conclusion that God exists would follow. One of the key flaws in this mode of argument is assuming the nature of God before deducing that he exists. The definition for God that Descartes gives is an infinite, all-knowing, omnipotent being. However, other conceptions of God have been conceived that do not include omnipotence, or infinity, that have been perceived clearly and distinctly. For instance, polytheistic religions of old required a different conception of God than the monotheistic conception. They did not include infinity in the nature of their gods, because the existence of multiple gods limits the infinity and power of the others. What is to say that Descartes’ definition is not lacking an attribute of God that is necessary, or whether non-infinite definitions of God are the true definition? I agree with his idea of God, but the atheists he is aiming his Meditations at may not. Essentially, something that can be defined as existing cannot necessarily be defined into existence outside of one’s own mind. His idea of God may be perfectly conformed to his definition of God, but his definition of God cannot be defined as a perfect definition.

Another minor flaw in Descartes’ argument stems from his antiquated understanding of the functions of the mind and how they arise. In his wax argument, he describes the senses as being very unreliable for obtaining knowledge of truth, and that we know can only know things through pure reason alone. In reality, our senses and experiences are the origin of our faculty of reason. From modern developmental psychology, we know that humans go through stages in the development of the mind. The very first stage is the sensorimotor stage. Through experiential sensory observation of the world, infants learn schemas and patterns for identifying things, causal relationships, and the laws of nature. The senses are like a laser writing the CD-ROM that is the mind. Eventually at around 5-6 years, they learn the concept of conservation of matter, which is the concept that Descartes’ wax argument illustrates. We learn that even though something has changed form in front of us, it has not changed into something else. We only learn this through experience, which relies on the senses. Since the very framework of reason is established by schemas and patterns, which were established by experiences, which rely on senses, it cannot follow that we can only know things through reason and nothing else. This fact of how the faculty of reason gradually develops stands in contrast to Descartes’ conception of perceiving the world through reason and intellect alone to the exclusion of sensory experience.

Within the Meditation, the wax argument plays a role in proving that things in the world can be known without the senses, which at this point in the meditative process are still in doubt. It serves to bolster the claim that we can derive God’s existence through our intellect alone by the idea we have of him, without need for faith or objective evidence. I have given examples that reason itself is a faculty developed over time by the imprints of sensory experiences (called schemas), and since at this point in the meditation senses are still in doubt as to their reliability, this means reason itself is in question as to its reliability. How can we derive God’s existence if the only window to the outside world we possess, the senses, is suspect? The causality of this part of Descartes’ argument is weakened due to the derivation of reason from the senses.

Despite the unsound conceptions of reason and the somewhat flawed nature of ontological arguments, Descartes’ Meditations remain an essential building block of Western philosophy. If all premises are taken to be true, the arguments contained in his Meditations lead the meditator on a wonderful journey through existence. He challenges the way we think about God and existence even today, and for that reason, his Meditations continue to enrich minds and souls.

An Analysis of the Philosopher Rene Descartes' Argument on the Existence of God. (2021, Sep 13). Retrieved from http://studymoose.com/an-analysis-of-the-philosopher-rene-descartes-argument-on-the-existence-of-god-essay 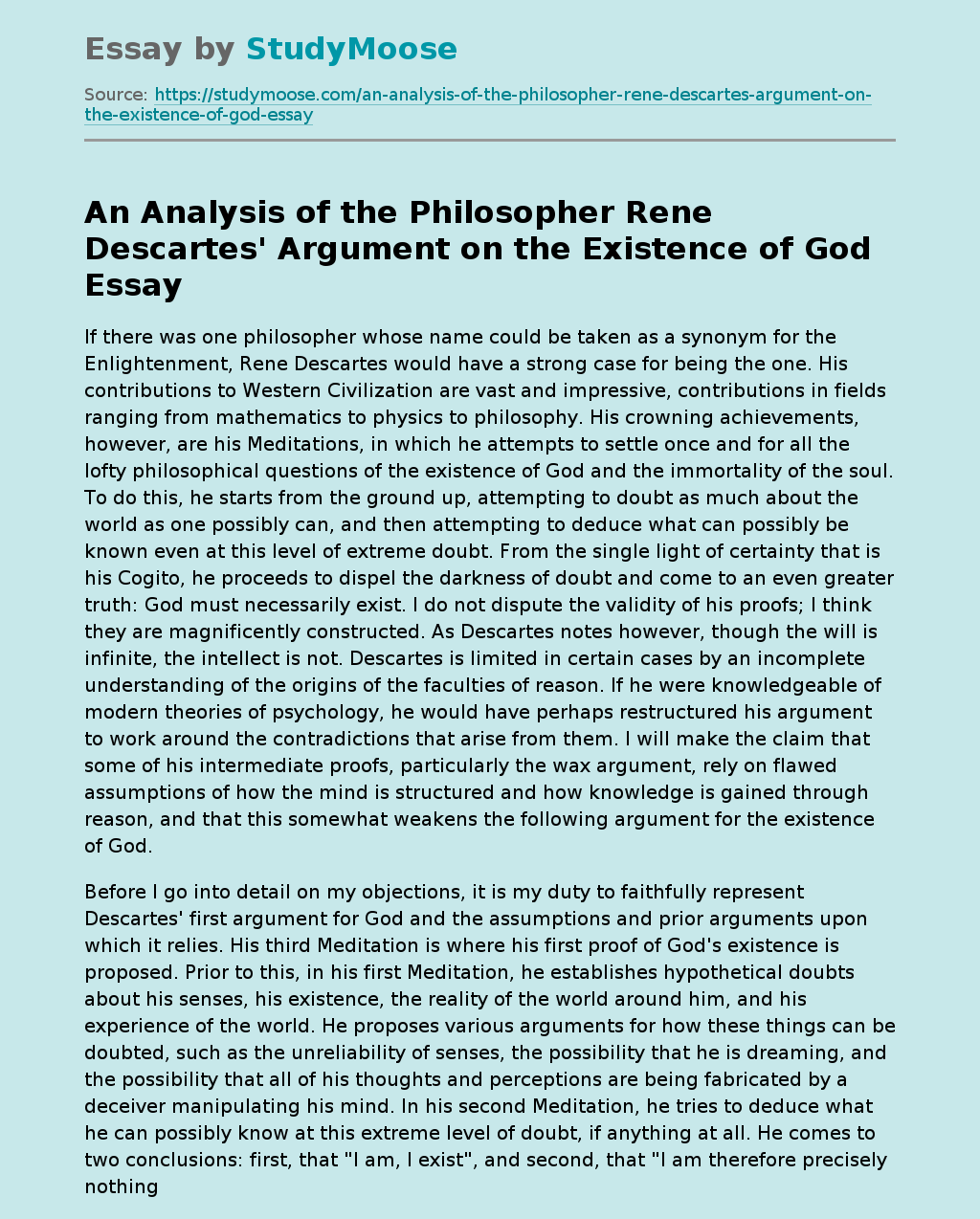