He broadly talked about mathematics and physics, and has influenced many other philosophers. One of his most famous arguments was the Dream Argument. He believed that there is truly no way of differentiating between being awake or in a dreaming state. Hilary Putnam was another philosopher, who followed Descartes work. His theory suggested a brain-in-a-vat scenario, that our brains are controlled and deceived by another individual or thing.

In the Dream Argument, Descartes considers the senses and their ability to deceive.

Don't use plagiarized sources. Get your custom essay on
“ René Descartes the Father of Modern Philosophy ”
Get custom paper
NEW! smart matching with writer

He goes on to discuss that while he is dreaming, he feels that he can sense real objects, causing him incompetence in knowing whether or not he is awake or is asleep. This is presented in a text from the Meditation 1, ‘How often does my evening slumber persuade me of such ordinary things as these: I am here, clothed in my dressing gown, seated next to fireplace.. when in fact, I am lying undressed in bed!’ (Descartes, 171) By relating back to his own experiences, Descartes expresses how dreams can be the key to reality.

Descartes insinuates that like in his dream, he is often sitting next to the fireplace and in the exact attire, therefore it is extremely believable. The Dream argument constitutes that our senses aren’t always reliable and they have the ability to easily fool us, in turn, we shouldn’t depend on our senses to support our beliefs.

Descartes suggests a theory of how all of one’s thoughts and experiences might be the outcome of an powerful outside force, a malicious demon.

He states, ‘I will suppose therefore.. that some malicious demon of the utmost power and cunning has employed all his energies in order to deceive me.’ (Descartes, 202) Descartes is unsure of what to believe, because the demon has convinced him into believing that his own thoughts and experiences aren’t real, that they’re just dreams.

In Grau: Bad Dreams, Evil Demon’s, and the Experience Machine, Hilary Putnam asks the question ‘Could we, if we were brains in a vat this way, say or think that we were?’ (Grau, 203) His intention wasn’t to preserve our habitual representation to knowledge, but to consider a different view of brain-in-a-vat story that is extremely similar to happenings in The Matrix. The Thought Experiment discusses how our brains could be in a vat and the possibility of them being tended by the universe or even a giant computer, resulting in giving us collective hallucinations and processing information as if it were acquired through our senses. Putnam stated, ‘not everything, that goes through our heads is a genuine thought, and far from everything we say is meaningful utterance.’ (Grau, 203) Putnam came to the conclusion that we can’t rationally think that our brains are in vats and that doubtfulness that we have about it results in inconclusive answer. The reason being, is that if we suppose that our brains were raised in a vat, then the environment that they were constructed in, wouldn’t result in a genuine brain or vat.

Both readings include that our dreams are our reality and that they are somehow controlled by an individual or thing. After understanding both arguments, I’ve come to the conclusion that it all depends on us and our beliefs, whether or not we are in the matrix or if we can truly distinguish what reality is. Considering how much of our knowledge is established upon our senses, which are susceptible to deception, it is important for us to consider if our beliefs are actually true. 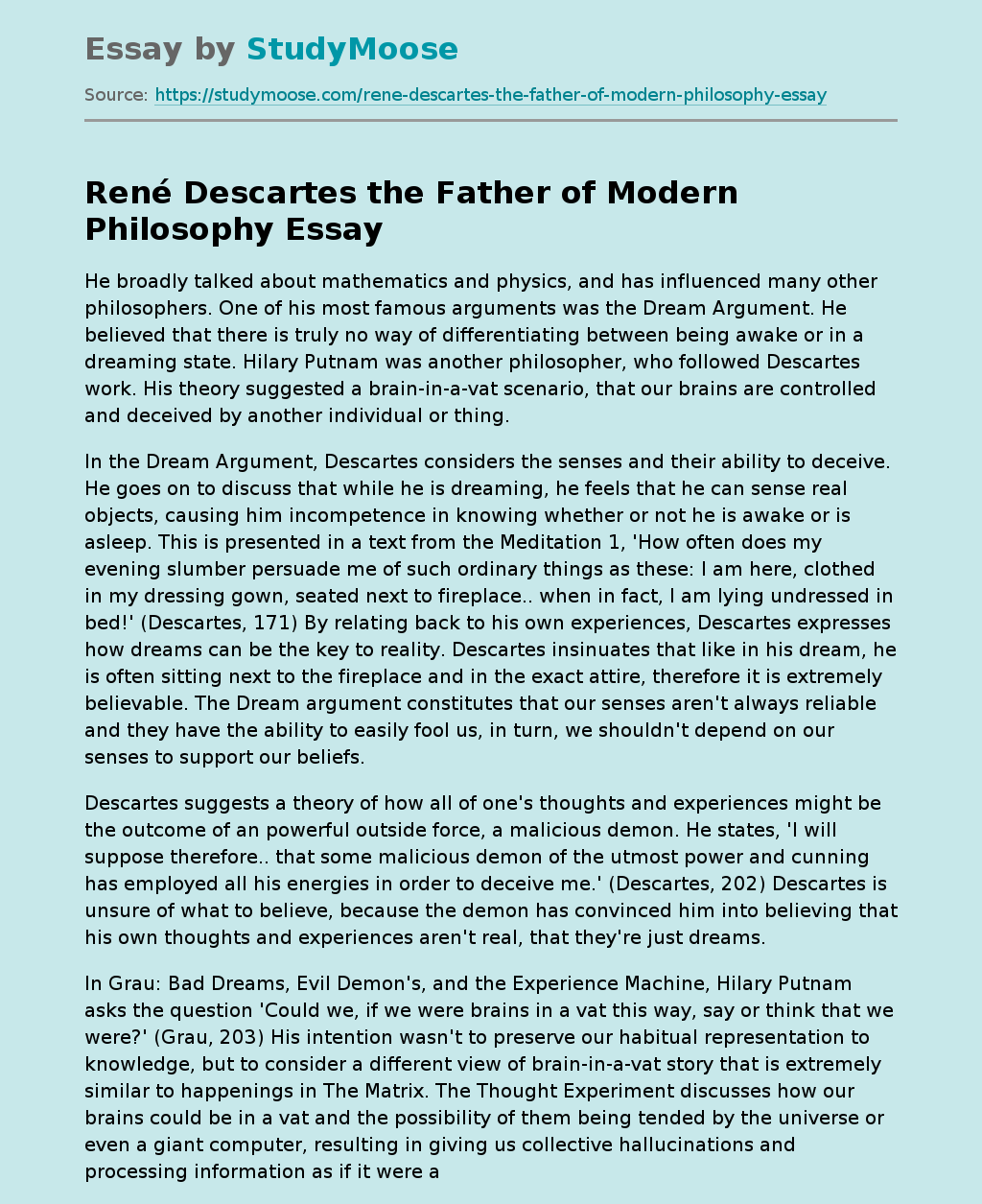