In Evaluating whether Herodotus was a Historian or an extremely charismatic storyteller, we must not look at Herodotus “The Histories” through a modern judgmental eye but rather through one of a person that should be fascinated that a man called himself an “inquirer” ,about a world that was filled with so much unknowns of which he discovered more of everyday.

Herodotus distinguishes to his readers the mere fact that his whole life’s work could very well be continuous tale of foe and disillusion or a series of facts encrypted in his narratives about the era and events that surrounded him but all he did was simply keep a record of what people had told him and things he had afterwards investigated “I am obliged to report stories that come my way but in no way inclined to believe them.

Don't use plagiarized sources. Get your custom essay on
“ Is Herodotus the father of History or the father of lies? ”
Get custom paper
NEW! smart matching with writer

“However this also gives reason for modern historians to clash on whether Herodotus could be held liable for his legitimacy as a historian (even if the word originally meant an inquiry, exactly what Herodotus claims to have been doing)and the authenticity of his sources even if through them he has given us a further insight to the Hellenic Period.

Nevertheless to accuse a person of falsity one must not only look at world’s Herodotus has perhaps created but his time in the one he actually lived in. Although little is known about Herodotus life other the fact he was born in Halicarnassus, Asia Minor and that must have been from the upper class since he had the financial capability to travel, many things can be inferred about his personality and therefore the credibility of his writing.

What is clear is his curiosity about past events and different culture’s tradition all of which Herodotus wanted to learn firsthand not just by reading but rather experiencing them first hand either by visiting distant lands such as Egypt where they occurred but also by hearing about them from as many people who had lived through them themselves, only to conclude and form his own opinion.

Being the first of his kind to actually research his material and question it and use a variety of different sources to create it, Herodotus having the claim to the title “Father of History” it can only assume he is worthy of it, being a pioneer and revolutionary of his era and paved the way for future inquirers to learn from his methods and investigate events, just so.

Herodotus begins with a monumental phrase of his pure intentions “so that human achievement’s may not become forgotten in time and some great and marvelous deeds-some displayed by Greeks, some by barbarians-may not be without their glory; “and to discover some reasoning on the origins of why battles began “show why two people fought with each other”. He initially presented his work in oral theatrical manner to an audience of Greeks in Greece. Presented to an audience who is much unlike a reader preferences in the sense that all an audiences wishes is to be entertained rather than informed and educated.

Herodotus toured Greek cities mainly during festivals, and gave personal performances to Greek audiences then got payed in return. Thefore some over dramatic elements of his writing can only be due to his attempt to captivate his audience. After Herodotus passed away editors separated his life’s work Histories into nine books. The first five books look into the past to try to explain the rise and fall of the Persian Empire. They describe the geographical elements of each state the Persians conquered and gives us insight on their customs.

Herodotus uses phrases such as “according to the Persian account” to show that the Greeks probably had a different way of viewing the same event (in this case on how Io came to Egypt in Book One). The following four books is the story of the war itself, consisting of the invasions of Greece by Persian emperors Darius and Xerxes to the Greek victories at Salamis, Plataea and Mycale in 480 and 479 B. C. Herodotus work parallels mythology, and at numerous times gives mythological accounts.

Mythology basically are stories based on an altered version of truth and accompanied by a vast development in imagination and creatitivy. Most of Herodotus narratives are identified as mythological which is problematic in essence. A prime example is Herodotus in his first passage in The Histories where he narrates a century old tale of Lydian Royalty and how it came to be that Lydian monarchy changed from the family of the reigning king Candaules and fell into the hands of his servant Gyges.

The story has a natural appeal to any audience due to one of Herodotus’s main theme revenge and other factors such as his use of violence “one of you must die; either my husband, the author of the wicked plot; or you, who have outraged propriety by seeing me naked” , whether this story has any truth in it, it will be definitely be disregarded due to the tale being as old as it is and even if it had not been subject to neighborhood gossip, whatever source had told him the story must have been extremely well informed to know the specific details on what happened in exclusive parts of society.

Thucydides who relied mainly only factual evidence and criticized Herodotus for just this greatly and for his aimless storytelling and insertion of fables in his narratives. Another landmark in Herodotus narratives is his use of oracles and their pivotal determining role not only to influence decisions but also to instill fear into obedience “not even the terrifying warnings of the oracle at Delphi” and the focus on the significance to powerful individuals for instance, according to Herodotus, one of the oracles given to the Athenians during the Persian invasion of 480 B.C. was “the wooden wall only shall not fall, but help you and your children).

While some Athenians interpreted this literally that the prophecy referred to the survival of the Athenian Acropolis from destruction, others thought the “wall of wood” as ships. However, the latter interpretation failed to make sense of the last two lines of the prophecy, “Blessed Salamis, you will be the death of mothers’ sons, When the corn is scattered, or the harvest gathered in”.

It was interpreted that if the Athenians were to engage the Persians in a naval battle, they were destined to lose. Despite this unfavorable omen, an Athenian commander called Themistocles decided to dismiss the oracle by arguing that if the Athenians were doomed, the tone of the oracle would have “not have been expressed in such mild language”. The Athenians were convinced, perhaps not by Themistocles’ interpretation, but by the fact that it would be better to fight the Persians, rather than not do anything, as seemingly suggested by the Oracle.

The Athenians gained a decisive victory over the Persians, and was the turning point of the second Persian invasion of Greece. However After one Xerxes has a “terrifying” Dream Artabanus is portrayed to give revolutionary advice to Xerxes that “dreams do not come from god” but rather “what we have been thinking about during the day” even if ultimately it was decided that vision seen in Xerxes dream was godsent.

Naturally along with his ability to dramatize and over emphasize Herodotus also has a Proathenian Bias and presents a less laudable side of Sparta and their imperialist inclinations such as Sparta’s early attempts to conquer Tegea and Cleomenes I attacking Argos where Herodotus reports that a large proportion of Argive infantry (6000 men) were killed in the conflict although the city itself was not taken and Argos who was once a worthy opponent of Sparta now “was left so short of men, that the management of town affairs fell into the hands of the slaves”.

To answer the question whether Herodotus is The father of Histories or the father of lies one must first understand the significance of Herodotus work and not dismiss any accuracy, we do know exists such as how many Persians and Athenians where killed in the battle of Marathon. Even If the facts are hidden beneath layers of captivating storytelling and gossip this does not give reason for Herodotus to be a fabricator of events . His technique in collecting and examining evidence is primitive and thus his title of Father of History is not one that should be altered. 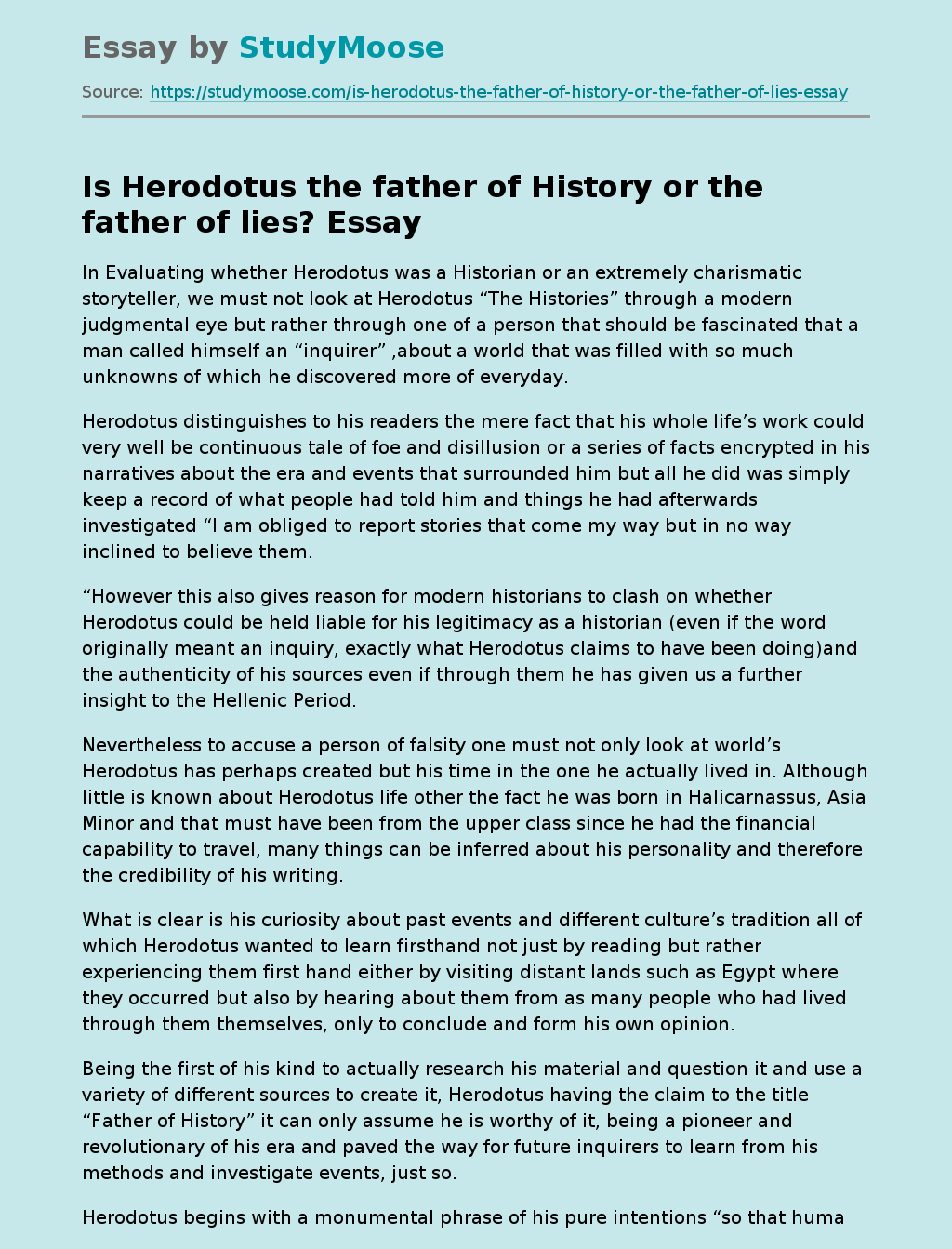