The Ways We Lie

It is curious to know that every day without thinking everyone tells lies “The Ways we lie” by Stephanie Ericcson is a realistic text that demonstrates what a lie is, why lies are told, how lies are justified, and consequences. According to this essay “We lie. We all do. We exaggerate, we minimize, we avoid confrontation, we spare people’s feelings, we conveniently forget, we keep secrets, we justify lying to the big-guy institutions.” (Page 408 of The Bedford Reader). Ericsson analyze the different ways we use lies to help and hurt our self in our everyday lives, and how this effects American culture.

Don't use plagiarized sources. Get your custom essay on
“ The Ways We Lie ”
Get custom paper
NEW! smart matching with writer

Everybody integrates a lie into de everyday life, but what is a lie? Ericcson presents to reader two different Webster’s definitions of lie “1. A false statement or action especially made with the intent to deceive and 2.

Anything that gives or meant to give a false impression” (page 408 of The Bedford Reader), and supports her idea that everybody lies and in many cases are acceptable. Besides, it is nearly impossible to disappear lies to the human life. Also, she breaks into each individual kind of lie and uses these information to influence the reader. Ericsson cited the lies that are hardly disputed like the notorious “white lie”, the “out-and-out-lie” and facade.

The first lie that she debates is the white lie; it is inoffensively telling an untruth so that no hurt is done by telling the reality.

Some individuals will feel disappointed, frustrated, or upset if the words from other people aren’t the wanted words that these people expected. But everything has consequences, in some cases a white lie helps in others not all depends on the point of view of the beholder. As the example of that is the Vietnam case, it is true family did not go hungry but they always kept their hopes alive, unable to move on to a new life.

Another one is the out-and-out-lie. A straight forward lie is known as an out-and-out-lie. This is a blatant lie which only has a shape and people do not think to say them so describes Ericcson. To her is the best form to lie “I like this one the best, probably because I get tired of trying to figure out the real meanings behind things”. This type of fallacy is easy to say and stupid because everybody realize that is a lie. At least, it is easy to confront it.

Ericsson then proceeds to explain a facade which is a deception that is caused by false actions. Basically, the person change your personality while ignoring the plain facts. The façade are used to seduce others in an illusion. It is common used for people that pretend be something that is not, and it will depend on what you expect the liar. To her façade are destructive for people because everything is a lie and a remarkable theater of the reality. To better understand a façade Ericsson talks about a friend who lied and betrayed her and never paid her.

Because everybody have an explanation, all lies have reason to be told. Why lies are told, this essay shows the multiple reasons. The most common reason is for don’t hurt others. The famous excuse use for everybody is for don’t hurt others, and as mentioned above this justification gives way to white lies. However, in some cases the liar wants protects himself and not wanting to suffer the collateral damage of their actions. Everything not to confront the reality of everyday life. Dealing with difficult situations is part of life, but sometimes is easy tell a lie. The writer tell different regular difficult situations. She speaks of her own experiences with lies and gives the reader an overview explanation of each one.

In other opportunities, she said that people don’t have a why for do it just lie by omission. She can easily demonstrate the dangers of omission. Ericsson shares that she had been stunned when learning that according to antique legends, there had been another woman in the Garden of Eden before Eve. Also, she includes this allusion to make the point that omission of information can be extremely harmful. She wants the readers to feel the way she does about lying being a common act some cases justifiable.

Is it possible justified a lie? Well to Stephanie in her essay it is possible. Naturally always exist a justification. “We exaggerate, we minimize, we avoid confrontation, we spare people’s feelings, we conveniently forget, we keep secrets, we justify lying to the big-guy institutions” (page 408 of The Bedford Reader). A principal reason of lie is to avoid the punishments. Also, she explains her lie technique because she doesn’t accept the bank punishment. Often peoplelie to avoid punishment consequence of economic problems. These are the principal reasons why people lie every day in their lives.

Sometimes people want to avoid fights with partners, coworkers and friends. She explains that if people said the totally truth, they will have more problems than joys. “When my partner came home, his haggard face told me his day hadn’t gone any better than mine, so when he asked, “How was your day?” I said, “Oh, fine,” knowing that one more straw might break his back” (page 408 of The Bedford Reader).

Naturally, every act has consequences and if these lies help us avoid many situations also bring negative reactions like people don’t trust you. When your friends know the truth, the disappointment overwhelms them often causing complete loss of a friendship.

Finally, delusion and illusion are part of the consequences. In Ericsson’s article she said that delusion is closely related to other forms of lying such as dismissal, omission, and amnesia. It is a form of protecting yourself from facts that you don’t want to face. Instead of taking a good look at yourself and being totally honest with yourself, you allow logic to go out the gap and make up pretexts for your actions. On the other hand, this type of lie bring seriously consequences because people may truly believe what you are telling than themselves. That makes delusion and illusion a cunning way to excuse your behavior and your actions. On a grander scale, some people may delude unpleasant or overwhelming facts.

As a final point, Ericcson uses a unique technique to the reader’s understanding of lies. She feels that lying is an important part of life; in
fact, it tends to minimize the number of times someone’s feelings get hurt and allows success and happiness, at the ending she leaves the message that everybody can have a unified life with lies as a second natures to make sense of everyday life and thoughts. 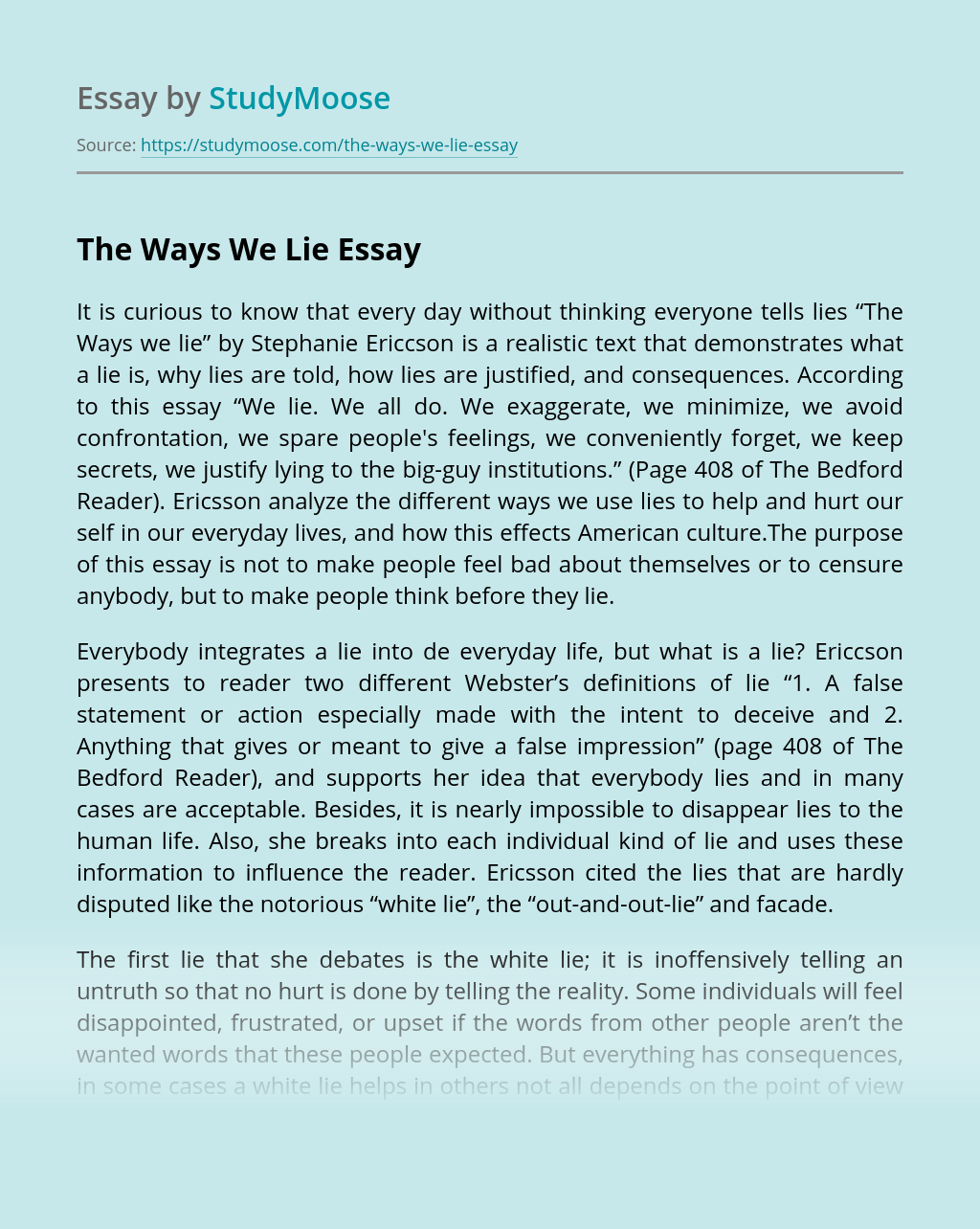