Lies are present in lives of all of us. Everybody are lying. Although each human lies for them own purposes. Our lives would be difficult without them. These are two kind of lies: good and bad. The first type of lies are good lies. People are lying to save face or to maintain them reputation. If you do not want someone to knew about that what you did when you were drunk, you would lie. For example, if you were dancing on the table, you will say: “No! It never happened”.

Don't use plagiarized sources.
Get Your Custom Essay on Good and Bad Lies Just from $13,9/Page

Lies to save face are the most popular because people often are doing a lot of stupid things. Others are lying to avoid punishment.

Most often it happened in homes. Children lie to their parents when they did something bad. For example, when they have broke the window or got bad grade. Furthermore, people lie in court to avoid punishment. Moreover, people lie to be polite for others. They lie about appearance, not do hurt anybody’s feelings.

Despite it is nice is still lie. As a result, sometimes people lie with good intentions. The second type of lies are bad lies. People lie to hurt others and they do it specially. One of the bad lies is malicious lie. For example, jealous neighbors are the best example to those lies.

They always have something to say if you have something better than they have. In addiction, teenagers are very good in lies too. Moreover, politicians lie very well. It does not matter on which stage are they. Politicians are lie, we are belive them, but unfortunately they do not do what they promised. The next bad lie people write in their job applications. For example, they lie about their experience. The lies soon or later will be discovered. To sum up, our live would be very difficult without lies. There are good and bad lies, which all of people use. 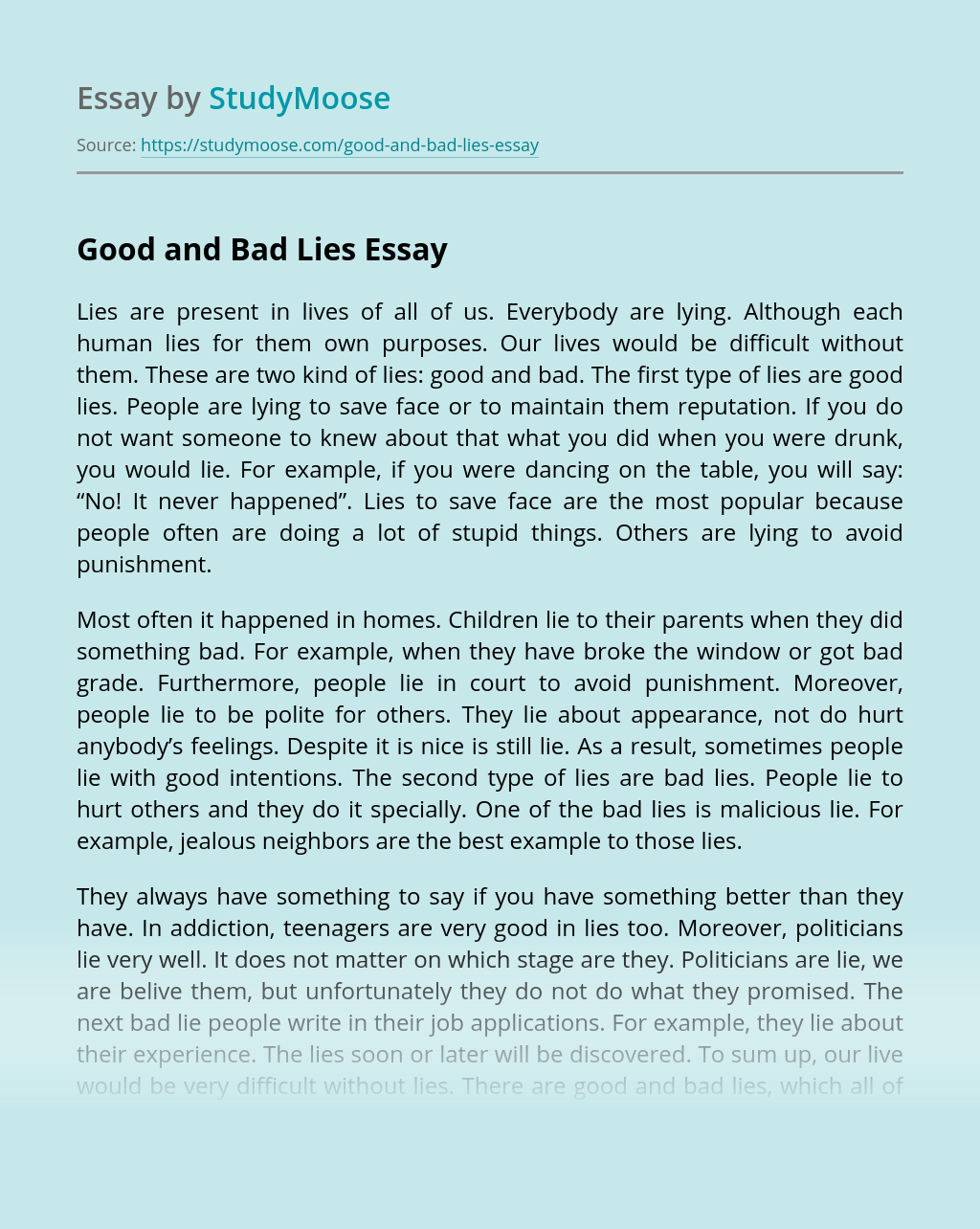 Lies are present in lives of all of us. Everybody are lying. Although each human lies for them own purposes. Our lives would be difficult without them. These are two kind of lies: good and bad. The first type of lies are good lies. People are lying to save face or to maintain them reputation....

Get Essay
Lying and Why It Is Wrong

Lying is wrong on so many levels…many of the topics relating to lying are through trust. Tust is a big issue in modern America, including losing it, the lack of trust from American to American! We cant trust each other, no matter what happens to a fellow friend. My youth pastor shawn and I had...

One Lie Leads to Another Lie - Decision and Consequences

Saira was a sixteen-year-old girl. She belonged to a middle class family and had a friend, Amna, who belonged to a very rich family. Amna was not good at studies like Saira and talked all the time about fashion, jewellery, concerts and parties, etc. Saira also wanted to do all the things that Amna did....

White lies are not acceptable in business or anywhere else for that matter. Telling a lie, either a grave lie or white lie, contradicts the absolute of truth, therefore making it wrong. Many people view white lies as harmless or innocent, but what they do not realize are the potential consequences of even a small...