The Tragedy of King Lear by William Shakespeare is founded on the theme of Nature portrayed throughout the play from Lear’s kingship to personal human relations, from representations of the physical world to notions of the gods, from the portrayal of human nature to the use of animal imagery. Nature is the core of the play King Lear. Shakespeare’s take on nature is ambiguous thus he portrays the two extremes of human condition: good and evil. Through his characters, he asserts that humans are neither good nor evil by nature.

However, Shakespeare reflects on what should be considered natural, since the concept of nature stems from social construct. In the play, there is a noticeable distinction between the natural ways in which people wish to behave as opposed to what is considered natural in society. Elements of the natural world, such as Mother Nature and the animal kingdom, are invoked in the characters’ speech, as they use their different concepts of what nature is in order to justify their actions.

Through this essay I will demonstrate good and evil nature mainly through the two juxtaposing characters: Cordelia, the Jesus-Like daughter, and Edmund the Machiavellian son, as well as the use of animal imagery to depict natural character traits. The plot begins on the day King Lear decides to divide his inheritance amongst his three daughters.

The proud King demands his daughters to show off their undying love for him in order to gain their share. However, King Lear’s notion of love is shallow, pompous and showy, which results in a great disadvantage to Cordelia’s natural way of being.

Unfortunately, King Lear’s royal authority belongs to the civilized world. Therefore, he goes against the natural world when he misinterprets Cordelia’s love and casts her out. One of the biggest problems in the play is that Lear calls upon nature: “which of you shall we say doth love us most/ That we our largest bounty may extend/ Where nature doth with merit challenge” (Act 1, Scene 1, Lines 52-54).

Lear mistakes Cordelia’s true natural, loyal behavior as unnatural and disobedient when she sincerely expresses “I love your majesty according to my bond, no more nor less” (Act I, Scene I, Lines 94-95) without the pompous performance played by Goneril and Reagan. Lear curses Cordelia exiling her outside society disclaiming “propinquity and property of blood” (Act 1, Scene 1). Lear’s lack of understanding of the natural bond between parents and children leads him to his tragic demise. He is easily fooled by Goneril and Regan’s fake “natural” behavior when they give their long speeches and flatter him.

Eventually, “Those pelican daughters” (Act 3, Scene 4, Line 75) and “Unnatural hags” (Act 2, Scene 4, Line-281) as Lear later on refers to them, throw him out of the house once they’ve obtained status and power yet fear he might take it back. Further on, they plot on killing Lear. On the other hand, Cordelia’s love is unconditional. Lear must go through a series of humiliating events to learn the true nature of love and the importance of the bond that Cordelia truthfully tried to explain. Cordelia is a tragic heroine, since she returns from France and easily forgives her father despite his wrath. Most importantly Cordelia gives Lear another chance to redeem himself as a king, a father and a human being. Shakespeare brilliantly portrays human nature through Edmund and Cordelia.

By placing them in a similar situation, he is able to demonstrate that humans act accordingly to their nature. These two juxtaposing characters are stripped away from their royal wealth due to social norms. On one hand, Cordelia faces adversity being a legitimate loving and obedient daughter, yet she doesn’t follow the selfish and disloyal path that Edmund does. Cordelia is one of the few genuinely good characters in the entire play. In contrast to her two sisters she’s a saint. Lear’s poor judgment and misunderstanding of the father-daughter bond ultimately leads to his tragic loss. The subplot of the main plot is the relationship between Gloucester and his legitimate son Edgar and his bastard son Edmund. Gloucester as Lear, misunderstands the natural behavior of his sons.

Edmund, a “natural” son, feels he is more deserving than his brother in spite of the social law of primogeniture. By calling Edmund “loyal and natural boy”, Gloucester mistakes Edmund’s unnatural behavior to be natural and casts out Edgar from the civilized world to the natural world. Lear and Gloucester share that they are both deceived and furthermore, mistake unnatural behavior (conspiracy against parents) to be natural (loyal and loving behavior). These misunderstandings ultimately lead to their downfall.

Edmund calls on Mother Nature: “Nature, art my goddess.” This statement implies that nature provides an evil force. Edmund’s views this baseness as natural. Furthermore, Edmund recognizes his own evil nature and decides to use it to his advantage. He mocks the notion  of any kind of supernatural or divine influence over one’s destiny in the following lines: “…as if we were villains on necessity; fools by heavenly compulsions; knaves, thieves, and treachers by spherical predominance, drunkards liars and adulterers by an enforced obedience of planetary influence” (Act I, Scene 2, Lines 131-135). In Edmund’s soliloquy at the beginning of Act 1 Scene 2, we learn of his malevolent intent to degenerate his legitimate half brother.

Machiavelli believed that by nature, humans are not perfect in virtue and therefore, humans do not only posses good qualities, but bad ones “For if men were all good, this rule would not be allowable, but being they are full of mischief…” (p. 100). Although he recognized that loyalty and trustworthiness can be gained, he believed that in times of adversity people are generally ungrateful, insincere, anxious to look out for their own safety, and greedy for gain “They are unthankful, inconstant dissemblers; they avoid dangers and are covetous of gain” and will rebel if they are in danger. (p. 99). Therefore, Edmund’s natural behavior represents Machiavelli’s belief of human nature being evil driven by a selfish, insincere and disloyal natural way of being.

Contrary to Edmund, Cordelia also faces adversity and she stays true to her benevolent nature. Her character counteracts Machiavelli’s argument of human nature. Through this, Shakespeare hints that Machiavelli’s beliefs aren’t necessarily true and do not apply to human nature.

Edmund reflects the character traits found in Machiavelli’s The Prince, as he rebels against the laws of society and is willing to hurt others in order to achieve power and status. He is ungrateful to his brother and father and deceives everyone around him for his benefit. Edmund appears to be loyal and trustworthy and knows how to play with these virtuous qualities, protecting his reputation while betraying others. He’s character reflects the lion and fox-like qualities described in Machiavelli’s depiction of the ideal ruler. Thus, he is conscientious of his wickedness since the “end justifies the means”.

Edmund inverts the order of society by attacking the convention of marriage and law of legitimacy. “Thou, Nature, art my goddess; to thy law/ My services are bound…” (Act I, Scene 2, Lines 1-22) Through this passage Edmund expresses his reverence to Nature (nature being the gods) and therefore demands “Now, gods, stand up for bastards” (Act I, Scene 2, Line 22). He explains that his conception comes from lust and passion being the most natural way of procreation. Furthermore, he rejects society and laws that deprive him from his right of being a legitimate son. 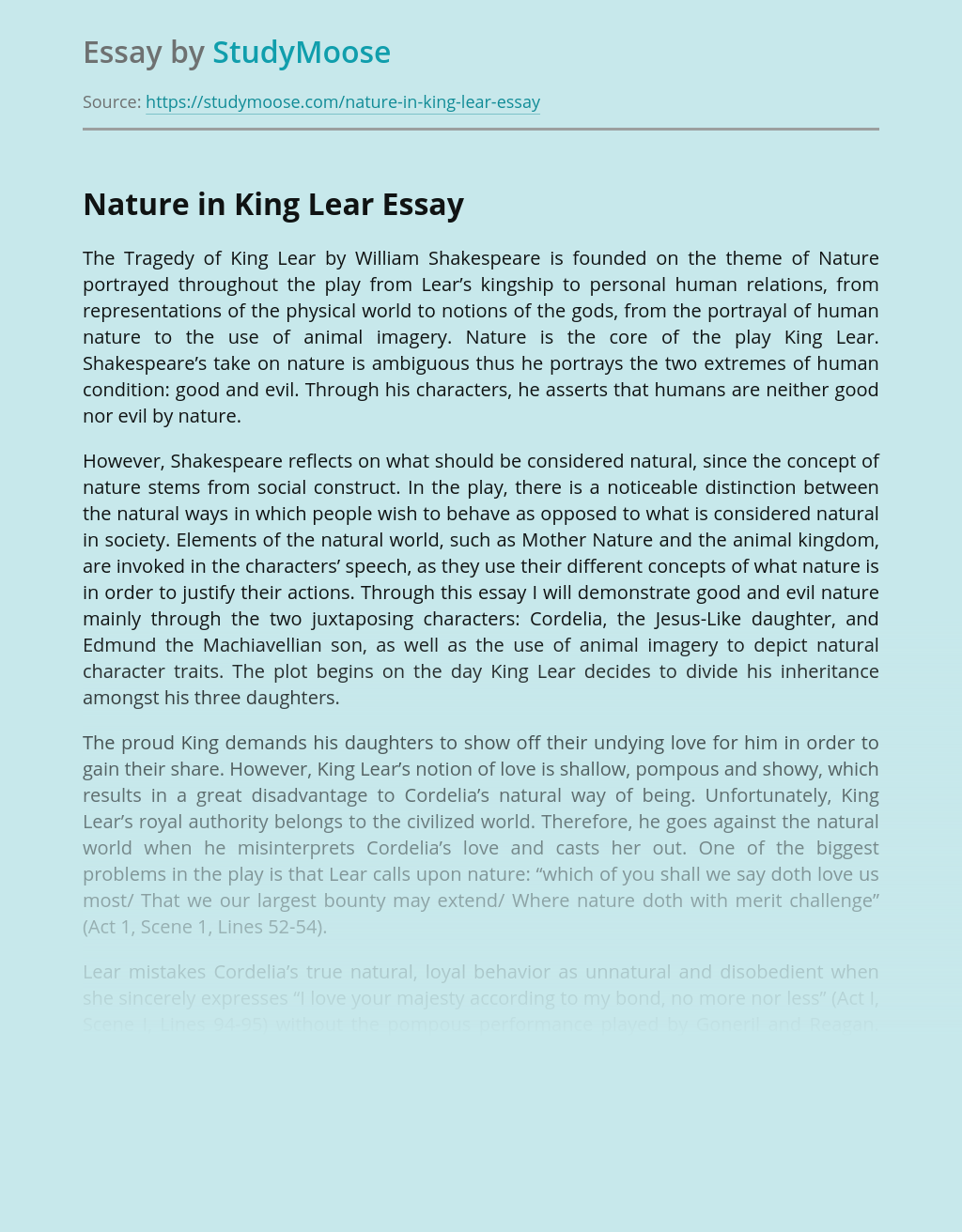