What differentiates Hamlet from other plays from Shakespeare is that the action we expect to see, and particularly Hamlet’s action, is continually postponed while Hamlet tries to understand the truth about his father’s death and about what he should do. This play poses a certain number of questions that other plays would have taken for granted. For example, Hamlet does not know whether the ghost he has seen truly is the ghost of his father, whether he is benevolent or a devil… He therefore has to set up a play within the play to observe Claudius’s reaction to it.

Don't use plagiarized sources. Get your custom essay on
“ How does the impossibility of certainty affect Hamlet? ”
Get custom paper
NEW! smart matching with writer

If the play helps him elucidate his father’s death, he is however mistaken when he decides not to kill Claudius in his prayer, in fear that he should go straight to heaven. The impossibility of certainty, for Hamlet, is an obstacle to action. Another example for it is his impossibility of knowing what comes in the afterlife: Hamlet cannot resolve to committing suicide because of it.

However, this impossibility of certainty does not only affect Hamlet in the play, but also the spectator: Shakespeare uses it on his public to underline Hamlet’s difficulties. The most striking example of it is the question of Hamlet’s madness. He decides that acting mad will serve his purpose, but the limit between his acting and his psyche is completely unknown to us. Part of this lies in the choices of the stage director: for example, if there is no effective ghost on stage when Hamlet sees it when his mother doesn’t, it accentuates the fact that he can be considered mad.

However, some things in the play already implant doubt in the spectator’s mind. His lucidity, for instance, is what makes us think he is still sane; however, when Ophelia loses her mind (and, for her, no doubt is possible), she distributes flowers that correspond to each character in their most intimate secrets, showing a certain lucidity in madness. We are therefore incapable of knowing the truth about Hamlet’s madness.

Some people have made of Hamlet a play about indecisiveness, and thus a play about Hamlet’s failure to act. However, when he finally thinks he has obtained the truth, he takes action in a rapid and rash way: he kills Polonius, Rosencrantz and Guildenstern, probably some pirates, Leartes and finally, the King. It is therefore more interesting to consider that the play shows us how many uncertainties our lives are built upon, how many unknown things are taken for granted when people act or when they evaluate one another’s actions.

How does the impossibility of certainty affect Hamlet?. (2016, Feb 19). Retrieved from https://studymoose.com/how-does-the-impossibility-of-certainty-affect-hamlet-essay 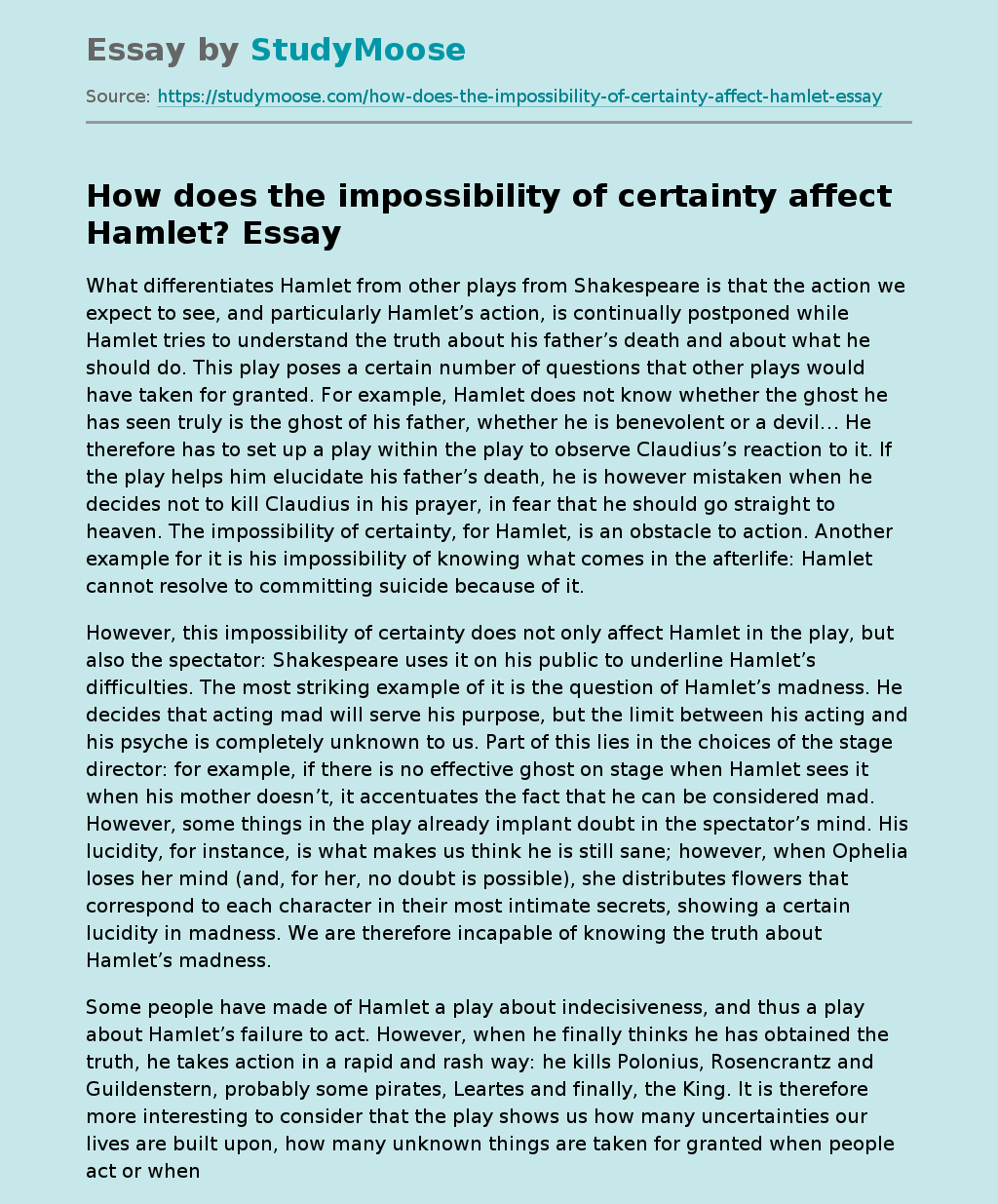