In his first meditation, Descartes embarks on a journey to ensure that all his beliefs are true. He deems that he must rid himself of all false knowledge in order to obtain any true knowledge. Descartes decides to doubt everything he has previously held to be true. He will rely on his reasoning ability to rebuild his own knowledge, beginning with things of which he is completely certain. He states, “But reason now persuades me that I should withhold my assent no less carefully from opinions that are not completely certain and indubitable than I would from those that are patently false,” (18).

Turn in your highest-quality paper
Get a qualified writer to help you with
“ Descartes Meditation 1 Summary ”
Get high-quality paper
NEW! AI matching with writers

Descartes refuses to accept anything that is possible to doubt. His reason for doing so is because he truly believes that this is the only way to discover the possible existence of something that cannot be doubted.

While the text is at times muddled, Descartes does use a method in his attempt to acquire knowledge. He starts by defining everything he could possibly doubt.

He presents the argument of sensory deception. In his life, the things he has accepted as true are things he has learned through his senses. In this meditation, he rejects knowledge that which he has learned through his senses because he claims that the senses can often deceive. But, while the senses are deceitful in some cases, Descartes claims that there are certain things learned through the senses that would be crazy to doubt. For example, he simply describes what he is wearing and what he is doing at the time he is writing the meditation.

He uses his senses in order to write this description, and he claims that he would have to be insane to doubt what he is saying (19).

Descartes then goes on to present a second argument, about dreams. He claims that there is the possibility that he is dreaming. He compares the perceptions we have in our dreams to those we have when we are awake. They are essentially the same. He concludes that there is no definitive way to distinguish being awake from being asleep. However, he still maintains that there are certain things that would be foolish to doubt. He considers several of his a priori beliefs as potentially containing doubt. For example, he casts some of his basic knowledge of mathematics into doubt. He states, “For whether I am awake or asleep, 2 plus 3 make 5, and a square does not have more than 4 sides,” (20). He ultimately concludes that while the senses are at times deceitful, certain things are indubitable.

Descartes then transitions to the existence of God. His considers the potential doubt of his a posteriori belief of God. He claims that God is all-powerful and all knowing. He reasons that he, himself, could not have come up with the idea of God, because God is a being more perfect than himself. And the only way he could have an idea of such a supremely perfect being is if God himself planted the idea in the meditator. Therefore, he concludes that God does exist. Since God is supremely good, the meditator determines that God is not a deceiver. The meditator then reaches the conclusion that God is not a deceiver, but there could be a “supremely powerful and clever,” (22) evil genius who is deceiving him. This leads the meditator to believe that everything his senses tell him is possibly an illusion created by this evil genius.

Descartes ends his first meditation in a state of ambiguity. The possibility of an evil genius deceiving him causes him to doubt everything. He closes the meditation without having reached a distinct conclusion, but he states that he will refuse to believe the false things he used to believe. 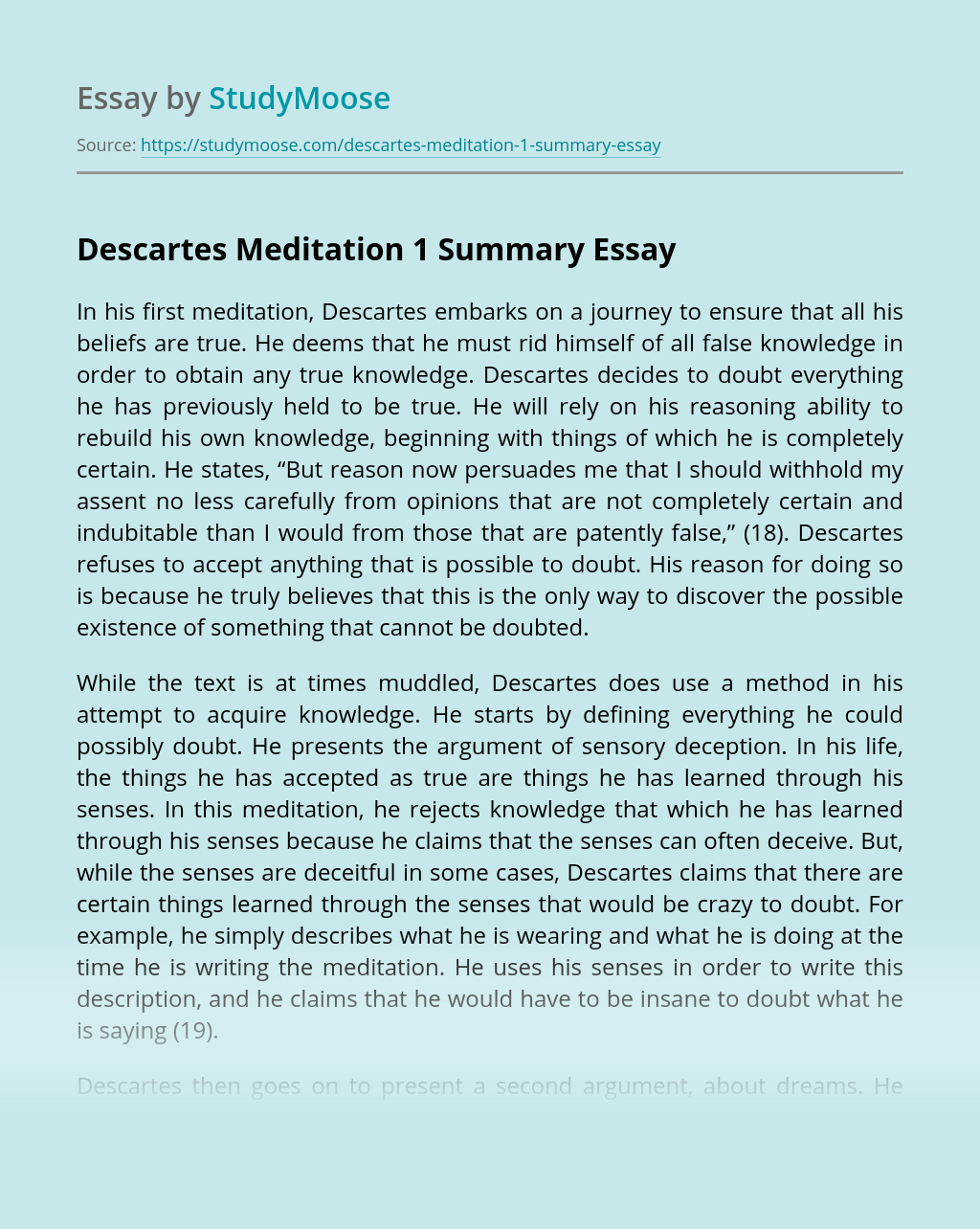 Turn in your highest-quality paper
Get a qualified writer to help you with
“ Descartes Meditation 1 Summary ”
Get high-quality paper
Helping students since 2015
Stay Safe, Stay Original