In “Meditation 17” by John Donne, Donne uses many different methods of trying to get his message out. By using metaphors, images, and paradoxes Donne gets his message out but in a perplexing way. In order to understand what Donne is saying, this passage must read over and analyzed sentence by sentence to really see the true meaning of the excerpt.

Donne uses a book as a metaphor, with man as a chapter for every part of the book and God is the author.

Don't use plagiarized sources. Get your custom essay on
“ “Meditation 17” by John Donne ”
Get custom paper
NEW! smart matching with writer

Donne believes God controls everything and everything happens for a reason. Donne then states, “God employs several translators; some pieces are translated by age, some by sickness, some by war, some by justice; but God’s hand is in every translation.” The translations of age, sickness, war, and justice are all things that can cause death. In that case, these elements can translate human beings into spirits of heaven or to anywhere else God chooses to send them.

Proficient in: Essays On Meditation

One of the most popular metaphors Donne uses is “No man is an island, entire of itself; every man is a piece of the continent, a part of the main. If a clod be washed away by the sea, Europe is the less, as well as if a promontory were any mans death diminishes me, because I am involved in mankind; and therefore never send to know for whom the bell tolls; it tolls for thee.” Here Donne is trying to say that one person cannot stand-alone. Human beings need each other for survival and support.

Donne then starts to talk about the death bell. He says whenever the bell tolls it is tolling for more than the one person who has died but it also is tolling for those who have been left behind to grieve over the death.

Also in order to get the message across Donne uses a paradox by saying, “For affliction is a treasure.” This is a paradox because generally when you think of a treasure you don’t think of it hurting you but you think of it making you wealthy or better off but instead he uses treasure as a source of suffering. But suffering is a treasure because it can teach you things, since you suffer from mistakes; you learn from them and don’t make the same mistake twice. By saying this Donne makes suffering sometimes seem like a good thing to have in your life.

Imagery is another device used to get Donne’s message across. “One chapter is not torn out of the book, but translated into a better language; and every chapter must be so translated” This is an image for the reason that he is presenting mankind and the death of mankind like a book. He is saying when a man dies he is not ripped away from society and forgotten but just thought of differently and every man dies (translated) in a different way although some may seem to be the same such as too people may have cancer yet it is still different because God has a unique death (translation) made out for each and every person.

By using many different methods John Donne gets his message across in a complicated way that seems to draw the readers into his writing. By breaking down the passage it can be smoothly translated into an easy to read text. Not only does this make it enjoyable to read but also it has given people something to read for years and most defiantly will in the years to come. 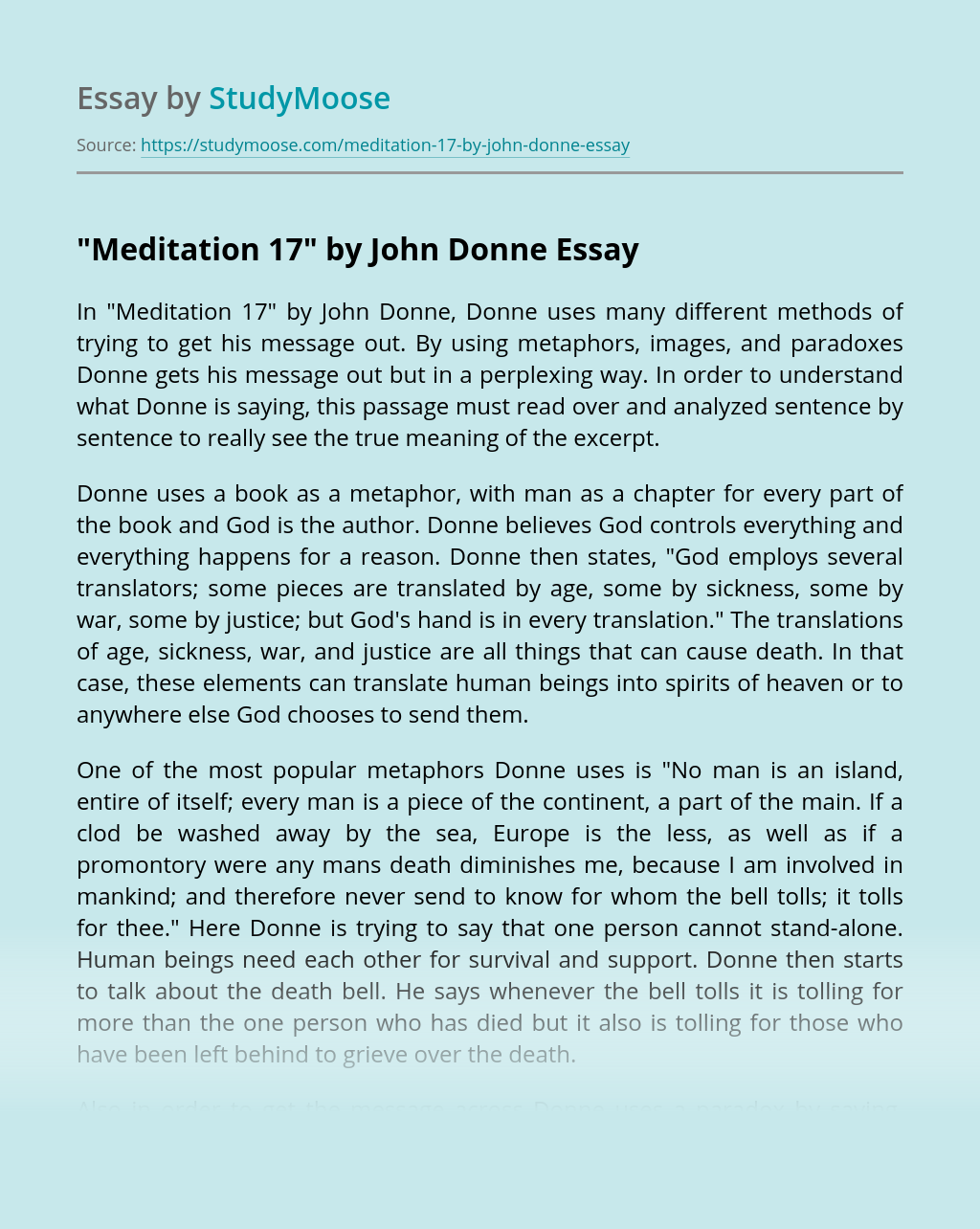