Poetry Analysis: "Batter My Heart, Three-Personed God, For You"

John Donne’s “Batter My Heart, Three-Personed God, For You” is an Italian sonnet written in iambic pentameter. The poem is about a man who is desperately pleading with his God to change him. He feels imprisoned by his own sinful nature and describes himself as betrothed to the “Enemy” of God, namely Satan. The speaker has a truly passionate longing to be absolutely faithful to his God, but at the same time is rendered hopeless by the reality that he cannot possibly achieve this on his own.

Turn in your highest-quality paper
Get a qualified writer to help you with
“ Poetry Analysis: “Batter My Heart, Three-Personed God, For You” ”
Get high-quality paper
NEW! AI matching with writer

In fact, he would have to be captured and completely made anew to ever find such faith.

The entire poem is driven by this desperate longing for renewal. The speaker seems to start with a request that illustrates his despondency simply because of its harshness. (He requests to have his heart battered.-ln 1) As he continues in prayer, the character becomes more distraught. He explains his feelings of total helplessness in the simile found in line five, where he compares himself to an usurped town.

By line eleven he has professed his deep-rooted love for his God and his awareness that he will never be faithful to this love unless he is torn and broken and then made new.

In each breath released or word murmured by this character, the reader is perfectly aware that he is at the last of any strength he may have previously had. The speaker is quite aware that he is powerless on his own. He holds nothing back in this cry to his God for help, but instead is completely humbled by his sin.

The words are full of a desperate longing to finally have a true, purely faithful love for his God. This desperation drives the entire poem from the very first word to the last.

The primary technical device in this poem is the use of contradicting ideas, or paradoxes. The speaker consistently asks his God to grant him a request that can be gained only by going in what seems to be the opposite direction. He requests to be overthrown so that he may rise and stand (ln 3), and even more vividly to be ravished only so he can become chaste (ln 14). In nearly every sentence Donne writes, there is an example of such a paradox. The repetition of these opposing concepts makes the tone of desperation in the speaker’s words easily detectable. A man has to be at his absolute end to ask that his God do more than simply seek to mend his wounds. The speaker declares in lines one and two that he would rather be battered. The fact that the voice of the speaker seems to be crying out these requests with no restraint proves that he is completely consumed by this need for the resulting faithfulness that is ensured.

The words of the poem are harsh and severe. Their hard sound allows the reader to truly understand how weak and wounded the speaker feels. An imagery that touches the reader’s sense of feeling, both physically and emotionally, is illustrated predominantly throughout the verse. The words paint perfectly the horrible images of being imprisoned, broken, or ravished. The reader feels the pain that would be brought if these things actually occurred. At the same time the harsh words and images cause the reader to also identify with the emotional state the speaker has to be in to make such requests.

Donne also uses other poetic devices that cause the reader to feel the words instead of simply reading them. For example, the alliteration in line four (break, blow, burn) brings with it the feeling of being knocked down or overthrown simply by its beating rhythm. The structure of the poem’s sentences also seems to stress the speaker’s current state more than the help that would be brought by his God intervening. Donne does this by placing these improved results in the middle of the sentences as subordinate clauses, causing the reader to give less emphasis to the possibilities for healing and focus more on the speaker’s current state of hopelessness.

Donne’s poem is overall captivating, real, and moving. It stirs emotion inside of the readers and holds their attention with the harsh reality that this poem is the description of nearly all people who have faith. Though the phrase “three-personed God” is an allusion to the Christian triumvirate, anyone who is deep-rooted in their religion can relate to this desperate longing to be faithful to their God in a real and passionate way. Though hard to believe, most of those people probably feel that this poem was based on a passionate prayer from their very own heart.

Poetry Analysis: "Batter My Heart, Three-Personed God, For You". (2016, Jun 20). Retrieved from https://studymoose.com/poetry-analysis-batter-my-heart-three-personed-god-for-you-essay 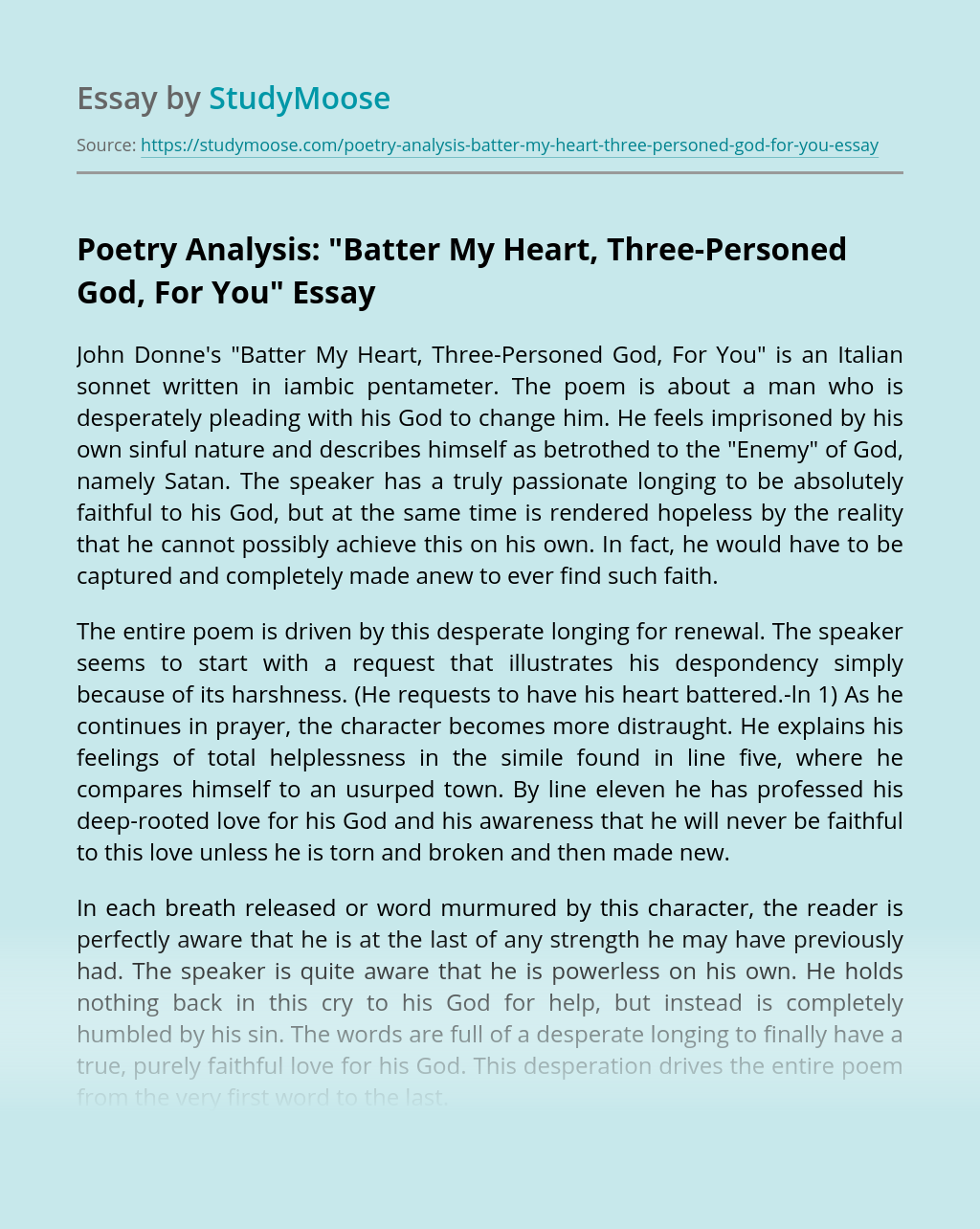 Turn in your highest-quality paper
Get a qualified writer to help you with
“ Poetry Analysis: “Batter My Heart, Three-Personed God, For You” ”
Get high-quality paper
Helping students since 2015
Stay Safe, Stay Original