Arna Bontemps uses the conventional plot structure in “A summer Tragedy” to present the theme of being hopelessness and desperation, a genuine love between a poor couple, loyalty, freedom, and liberation. The exposition introduces old Jeff Patton is the black share farmer who lives in the farm with Jennie, his wife, in New Orleans. Jeff and Jennie are two protagonists. Both of them are very old. He has a stroke and other body problems. They dress up their best attire to go for a journey.

Don't use plagiarized sources. Get your custom essay on
“ Overview of Short Story A Summer Tragedy ”
Get custom paper
NEW! smart matching with writer

He cannot tie his bow by himself because of his trembled fingers. So, he calls his wife come to help him. This can be seen that Jennie is also blindness and weak health. Her body is aching. The rising action begins with a conversation that Jennie tells Jeff to bring the car while he is waiting. He doesn’t move because the mention of the car comes to his mind with intensity. He thinks about the trip that he will take with his wife.

It is not a normal trip. He is so scared.

His car is the rattling car. When he gets into the car, he was trembling violently. Jennie says she is ready to go. Jeff limps into the house and takes her. Jeff reminds Jennie about the door but Jennie answers that they have no reason to lock up. The rising action hints they will not come back here. They decide to flee from hopeless and despair life. During Jeff’s driving, he always thinks about his past life.

He works hard for forty-five years with Major Stevenson.

There is unfair labor, which can be seen by the way old man Stevenson treats his workers and even his farm animals (mules). He also thinks about his five children in a span of two years. In addition to this, they have debts which they cannot finish paying, were living in poverty and they had neighbors who they cannot trust as most of their chickens are stolen or killed from their home. Jeff realizes that he and his wife are lost for hope in their life. The falling action describes their hesitancy. Jennie is crying.

She may reconsider that she does not want to leave all the things she used to. Jeff makes her calm down. He conscious that if he is still alive with a stroke, Jennie will have to look after him. Jeff’s love for Jennie is also seen, as he prefers dying than the thought of burdening her. The resolution shows that they have to get away from all this and suicide was the only thing they could think of. They wanted a life free from oppression and misery. The Pattons are going through many struggles. Death is seen as the only resolve out. 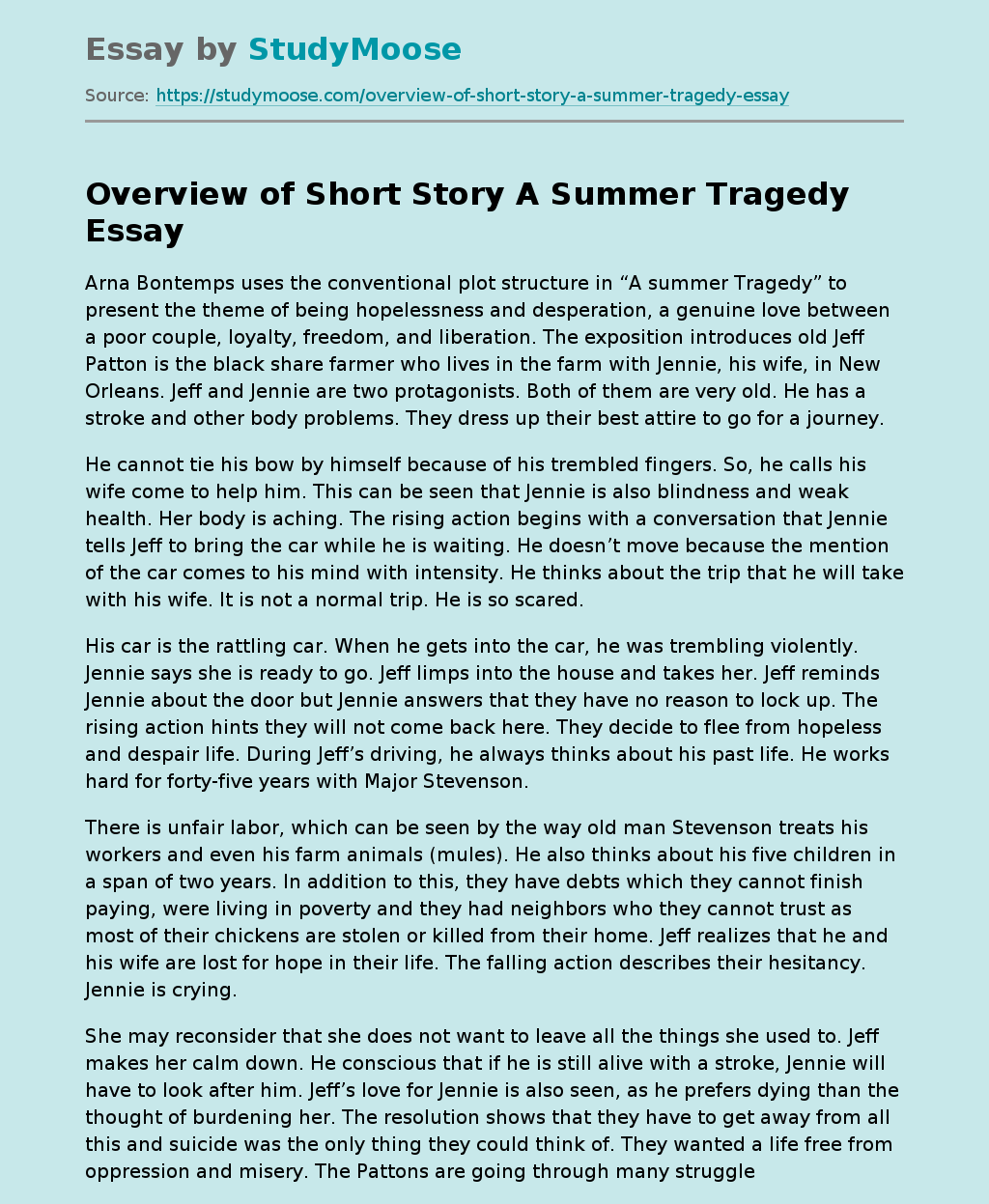