Andrew Pham, author of Catfish and Mandala, is on a journey of self-exploration. Family dysfunction, the illusions of the past, and the inability to move forward and find meaning to life when living between two cultures, are all catalysts’ for Pham return Vietnam. Contrary to being welcomed with open arms, Andrew is referred to as Viet-kieu when he is in Vietnam, a derogatory term meaning Vietnamese-American. Vietnamese people feel that the Viet-kieu abandoned everything about their culture when transplanted to America.

Turn in your highest-quality paper
Get a qualified writer to help you with
“ Catfish and Mandala ”
Get high-quality paper
NEW! AI matching with writer

This is an additional layer to the struggles Andrew faces. Andrew’s life is fractured into many pieces. His family is plagued with deep-seated hostility and trauma that developed long before his birth.

From the abuse his father endured as a child and then transferred to his own children, the family decay after the Vietnam War, and the displacement of his family to America, Andrew has no sense of identity. Andrew is troubled with the duality of being Vietnamese and American and feels if he returns to Vietnam he will find meaning for his life.

He does not assimilate to either culture and his anxiety grows as he tries to find a place to belong. Pham reminisces on his childhood, and includes deep memories of his other family members as well.

The fissure in his family stems from the physical abuse and inability for the entire family to merge the two cultures and adapt together. The damage from the violence moves like a virus through the family, branching off and taking victim after victim.

Chi-Minh, Andrew’s transsexual brother, cannot rise above the hardship and kills himself. Through out the book, Andrew goes back and forth giving the reader insight into Chi-Minh conflicts. Andrew never moves past Chi-Minh’s death and writes about his last moments with his brother,” It was my season of unraveling. And his as well. I couldn’t remember all, what he said. Nor what I said. Maybe he wished I’d said something. And I him. Perhaps we should have shared our troubled hearts. But in the end – My long-staying memory – I heard only the wavering catch in his voice” (334). Pham regrets not being able to open his heart to Chi-Minh, and overcome the emotional disconnect of the Vietnamese culture.

Chi-Minh struggles to maintain a healthy existence and find life meaning. Sex change aside, Andrew blames the Vietnam War, family dysfunction and abuse, and a forced move to America as reasons for Chi-Minh’s short life and suicide. He draws parallels between his own struggles and Chi-Minh’s inability to create a life in America. The trauma of Chi-Minh’s death is an emotional vehicle for Andrew’s bike journey to Vietnam. As Children, Andrew and Chi were brutally beaten by their father. Even as a teenager, Chi survived a dreadful caning that resulted in her running away. Later, Andrew’s father recants his temper and wishes he could have “been more like an American father” because “They know how to cherish their children” (320). Andrew watches his own father struggle with being Vietnamese in an American society.

He was use to a father who had a “survival instinct” and “refused victimization” (321). His brothers are homosexual, this is a point of embarrassment for Andrews father. Andrew tries to explain how they are successful and happy, but the definition of successful and happy are vastly different in the two countries, with his father being “Old-World” (321). Andrew realizes his entire family has trouble converging Vietnamese and American cultures and he is not the only victim of the abusive and dysfunctional life. In his preparation to bike across Vietnam and absorb the country that he believes keeps the roots of his existence; he is unaware of the drastic changes since the Vietnam War. Andrew remembers Vietnam through the eyes of a child and the memories are mostly happy and quite biased. Pham’s illusion of the past leads him to an emotional awakening while traveling and he compares current-day Vietnam to a prostitute. Vietnam has been reduced to poverty in most places.

Andrew remarks, “Saigon was thick with almsfolk, every market, every street corner, maggoty with misshapen men and women hawking their open sores and puss-yellow faces for pennies” (106). Although his description is putrid, Andrew weeps for the poor. Having sympathy for the impoverished is an American way of thinking, and this is a point of shame for his family that he stays with in Vietnam. Crying is seen as weakness in men. The reader sees the internal struggle that continues as Andrew tries to “be Vietnamese” or to “be American”. Andrew is repulsed by the cold hearts of his Vietnamese family members, and then ashamed for having ill feelings against his family. Andrew believed he would find his identity with the Vietnamese people and his life would move forward with strong meaning and purpose. Andrew goes through life living for his parents, living for the happiness of others, and in this neglects to find his true self. Before his ride to Vietnam, he rode to Mexico, then through the coast of America, and through Japan for 45 days.

His physical journey mimics his stagnant and redundant state. He was wandering, living a superficial life. Andrew held the stress of the first-born son, to make his parents proud. He became an engineer, just as his mother told him he would do when he was four. He acted the role of the “Good Oriental employee” (25). Andrew recalls, “My father said ‘Good’ to me twice in my life. I showed him the glowing congratulatory letter from the national honor society…and for landing a cushy engineering post at a major airline” (24-25). As he travels, Andrew speaks as an American, and as a Vietnamese man.

Chapter two begins with Andrew stating that he is “Vietnamese-American” (10). He lists out his likes and dislikes, implying that he has a strong sense of self. The reader soon finds out this is superficial. Andrew proclaims all of this to set up where he is now and gives a brief family history of the stark difference of where he came from. When he arrives to Vietnam, he is ready to embrace the culture and be Vietnamese.

On the plane Andrew is divided by his feelings toward the Vietnamese as they fight for toys that have spilled, “Mortified by the Vietnamese’s behavior and equally dismayed that I feel an obligatory connection to them, I sink deeper in to my seat, resentful, ashamed of their incivility” (64). This is the beginning of the conflict Andrew faces about being American yet being from Vietnam. Instead of finding his way, his identity, value for his life, he is engorged with a larger paradox of emotion. Who is Andrew X. Pham? This is the question that Catfish and Mandala tries to answer by using memories and events of the past and journey of the present. A chasm opened in his family when they all integrated into American culture through very unique ways.

The family inadvertently makes the journey of self-exploration difficult for each other, with Chi-Minh’s being virtually impossible. Abusive treatment of the children acts as a symptom of the disorder and illusion of self through out the entire family. Andrew writes his memoirs in a rhythmic motion swaying back and forth through past and present, in hopes of finding who he is to be in the future. Andrew is torn between being Vietnamese in America, and American in Vietnam. He is afflicted with living a placid half-life, never socially accepted by either society, and forced to carve his own path and make his own statement of self. From Vietnamese immigrant, to respected engineer, and now famous author and food critic, Andrew has found a way to merge the Vietnamese and
American cultures to fit the mold of Andrew X. Pham, the Original.

Catfish and Mandala. (2016, May 04). Retrieved from https://studymoose.com/catfish-and-mandala-essay 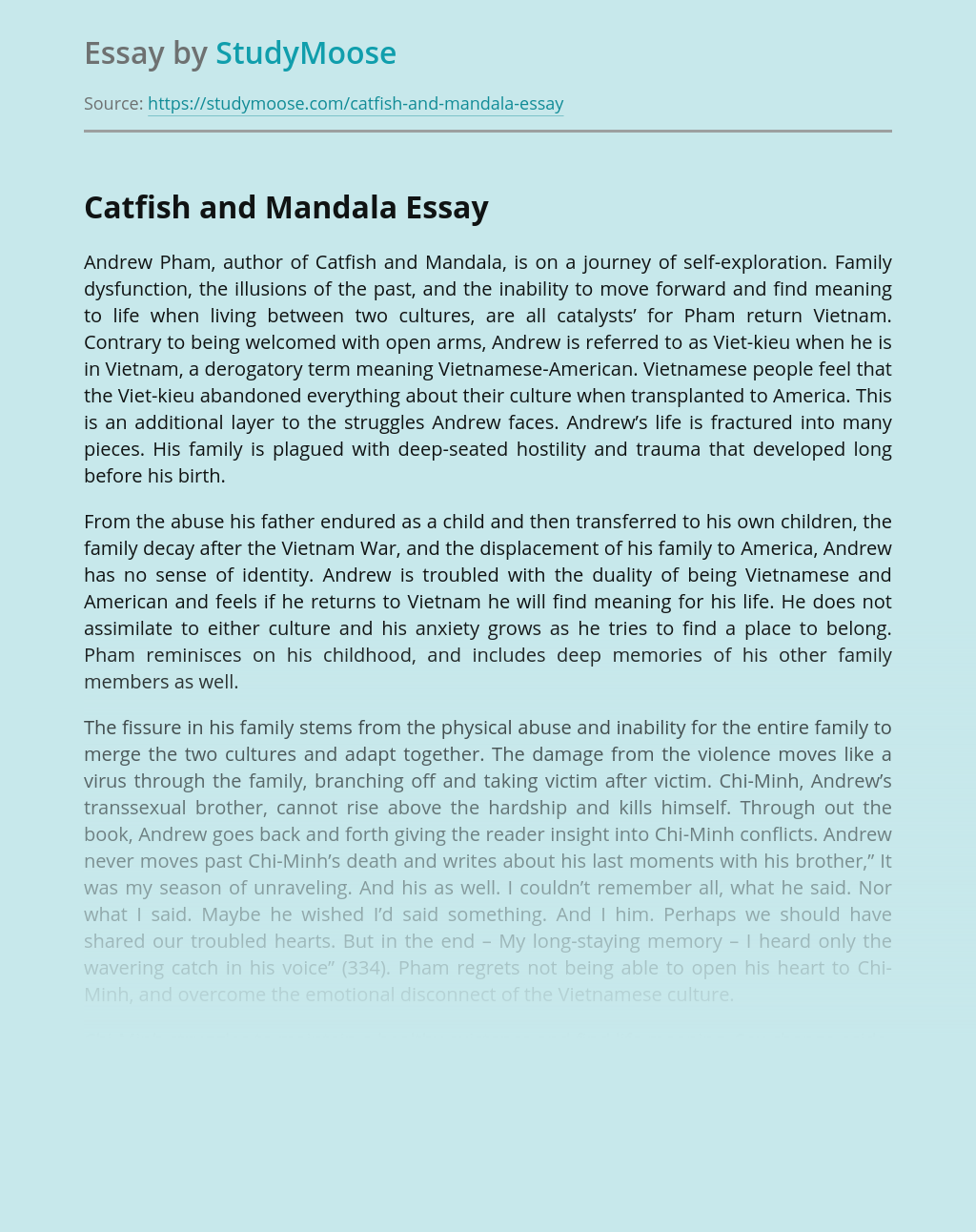 Turn in your highest-quality paper
Get a qualified writer to help you with
“ Catfish and Mandala ”
Get high-quality paper
Helping students since 2015
Stay Safe, Stay Original