How to Tame a Wild Tongue/Mother Tongue?

What’s makes someone an American? Am I more American because my skin is white and I speak perfect English? Or am I more American because my family immigrated here 100 years earlier than most? Our country is a melting pot of different races, backgrounds and beliefs. Two women, who are the children of immigrants, share their stories of growing up in America. The first is Gloria Anzaldua, a Chicana who grew up in South Texas. The first chapter of her book, Borderlands/La Frontera: The New Mestiza is titled “How to Tame a Wild Tongue”.

Don't use plagiarized sources. Get your custom essay on
“ How to Tame a Wild Tongue/Mother Tongue? ”
Get custom paper
NEW! smart matching with writer

She describes life as a young woman who is too Spanish for Americans and too American for Spanish. The second is Amy Tan, a daughter of immigrants who fled China in the 1940s. In her essay “Mother Tongue” she recalls growing up with a Mother who could not speak perfect English. While these women are from two different backgrounds, their experiences with languages are the same.

Both women have expressed the idea that language used with family, the educational system and society shape us as individuals.

When a person is at home, surrounded by those who are nearest and dearest to them, they let their guard down. The languages we speak around our families are often different from the ones we use in the professional world. Tan states this opinion in her essay; she remembers a time when she was conscious of the English she was using around her mother.

She was walking down the street with her mother and using the English that she did not use around her mother. She also states that this is the same type of English she uses with her husband. She writes that this type of language “has become our language of intimacy, a different sort of English that relates to family talk, the language I grew up with.” (Tan, page 143)

Anzaldua has a similar opinion when it comes to the language of our family; she writes “My “home” tongues are the languages I speak with my sister and brothers, with my friends.”(Anzaldua, page 134) Her type of language is a considered a subcategory of Spanish, called Chicano Spanish. Anzaldua also explains that in her culture she had to learn different dialects of Spanish, according to region that person was from. These two women played chameleon with their languages, blending in perfectly with their surroundings, wearing a mask to the world until they were home. At home, they were safe to use the language they grew up using without fear of judgment.

“To get a good job, you need to speak English well. What’s the use of all your education if you speak English with an accent?” (Anzaldua, page 132) Anzaldua grew up with the idea that her imperfect English would limit her opportunities, even with an education. When she became a high school teacher, she was reprimanded for giving her students literature by Chicanos. Tan’s educational experiences were somewhat different than Anzaldua. Her limitations were set by test scores in English and Math. Tan writes that her English scores “were not good enough to override the opinion that my true abilities lay in math and science, because in those areas I achieved A’s and scored in the ninetieth percentile or higher.” (Tan, page 145) While both women felt limited in their educational world, they both found a love for writing. They both became a voice for their people.

One thing that shapes a person’s perspective of themselves is how their society views them. Tan, at a young age, would often have to speak for her mother. Her mother’s English was view as “broken” or “limited” by society. This had a profound effect on how Tan viewed her mother’s English; she writes “because she expressed them imperfectly her thoughts were imperfect.” (Tan, page 144) Anzaldua’s Chicano Spanish was viewed as “poor Spanish” by society. “If a person, Chicana or Latina, has a low estimation of my native tongue, she also has a low estimation of me.” (Anzaldua, page 136) Society, the community in which these women lived, has looked down on the English that they speak. Both women feel that their language is “poor”, “broken”, or “limited” by society’s standards.

Gloria Anzaldua and Amy Tan were raised in two different cultures, with two different types of English. They grew up in families that spoke with accents and different dialects. Both women navigated their way through the educational system, which was not designed with them in mind. They were also viewed by their communities as being limited because their home language was not the standard. These two women also fought the system that wished to limit their voices. They became writers, they wrote their stories of how their language, for better or worse shaped who they were.

How to Tame a Wild Tongue/Mother Tongue?. (2016, Apr 28). Retrieved from http://studymoose.com/how-to-tame-a-wild-tonguemother-tongue-essay 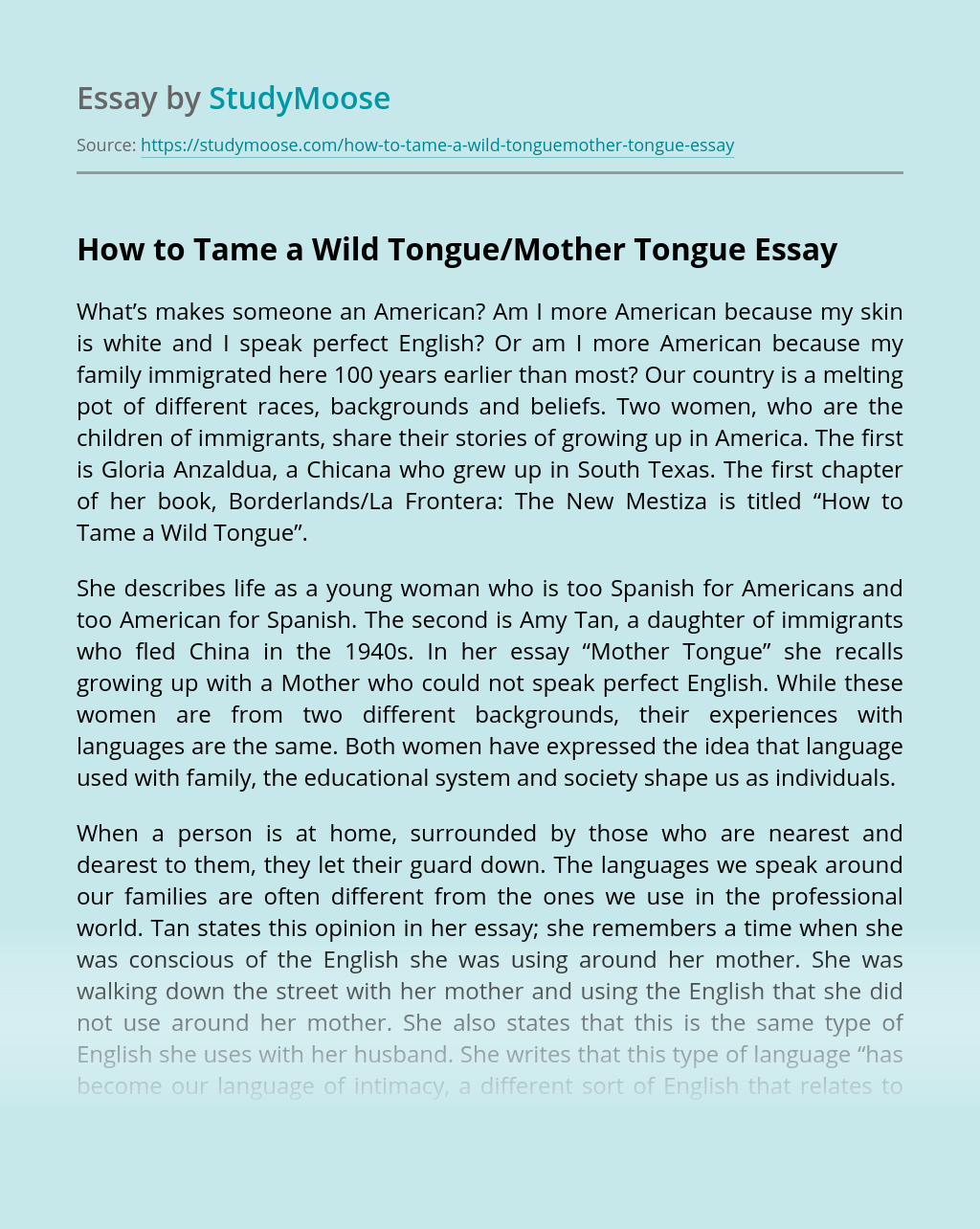