In Gloria Anzaldua’s book Borderlands La Frontera, The New Mestiza, she shares her experience in a post-colonial world as a Chicana, a lesbian and a woman who grew up in a cross-cultured area trying to understand her identity but also to make us rethink about what a border is and what are the consequences which come with it. Anzaldua creates a “mestiza consciousness” as a dynamic capable of breaking down dualistic ascendant archetypes. This concept is related to “hybridity”, a mixed race, which will be the primary focus in this essay.

The significance of being a hybrid in a colonized area of the North America resides in the desire of finding harmony between one’s cultural identity and the conqueror’s model society. Before the war with the US, California, Colorado, Arizona, New Mexico and Texas belonged to Mexico. As Anzaldua states, “ separated from mexico, the native Mexican-Texan no longer looked toward Mexico as home, the southwest became our homeland once more” (Anzaldua 29).

In this area she lives in, the border, Anzaldua cannot expressly think of herself as Mexican nor can she truly call herself American according to the norms which include language (English) and the skin color (white).

What is her identity then? All she knows is that her home is in the Rio Grande Valley. Anzaldua’s mother used to refer to boys as snakes: “don’t go to the outhouse at night […] a snake will crawl into your nalgas and make you pregnant”. The Azteca-Mexicana culture is male-dominated; women do not really have much power.

As she explains, “the first time I heard two women, a Porto Rican and a Cuban, say the word nosotras, I was shocked […] Chicanas use nosotros whether you are male or female. Language is a mal discourse” (Anzaldua 76). Women are controlled by men in her society, maybe this is one of the reasons she became a lesbian. Men drove the powerful female deities underground by giving them monstrous traits and by replacing them with male deities, which shows the lack of power women hold in this culture. In addition, the author explains that speaking Spanish was seen as an insult for Americans; “if you want to be American, speak ‘American’. If you don’t like it, go back to Mexico” (Anzaldua 75). The ironic fact here is that Gloria’s ancestors have always inhabited the land that now belongs to the US, before ‘white people’ came and populated the area.

The US itself was a colony with Spanish, French, British conquerors. Who said that ‘American’ has to be the language you must speak in order to belong to their land? In addition, she had to take two speech classes to get rid of her accent. She expresses that “attacks on one’s form of expression with the intent to censor are a violation of the First Amendment […] Wild tongues can’t be tamed, they can only be cut out” ( Anzaldua 76). Indeed, to truly be part of the American ideal society, she had to speak only English and get rid of her accent. However, her accent is part of the person she is, her culture and identity. Getting rid of it is getting rid of her cultural background. In conclusion, Gloria Anzaldua explains how challenging it was for her to live in a colonized land of North America, trying to fit in their ideal society without forgetting her own culture and everything that identify her. Her sexuality, gender, religion, culture, language and accent are what constitute the Self, what represents her uniqueness and defines her role in North America. 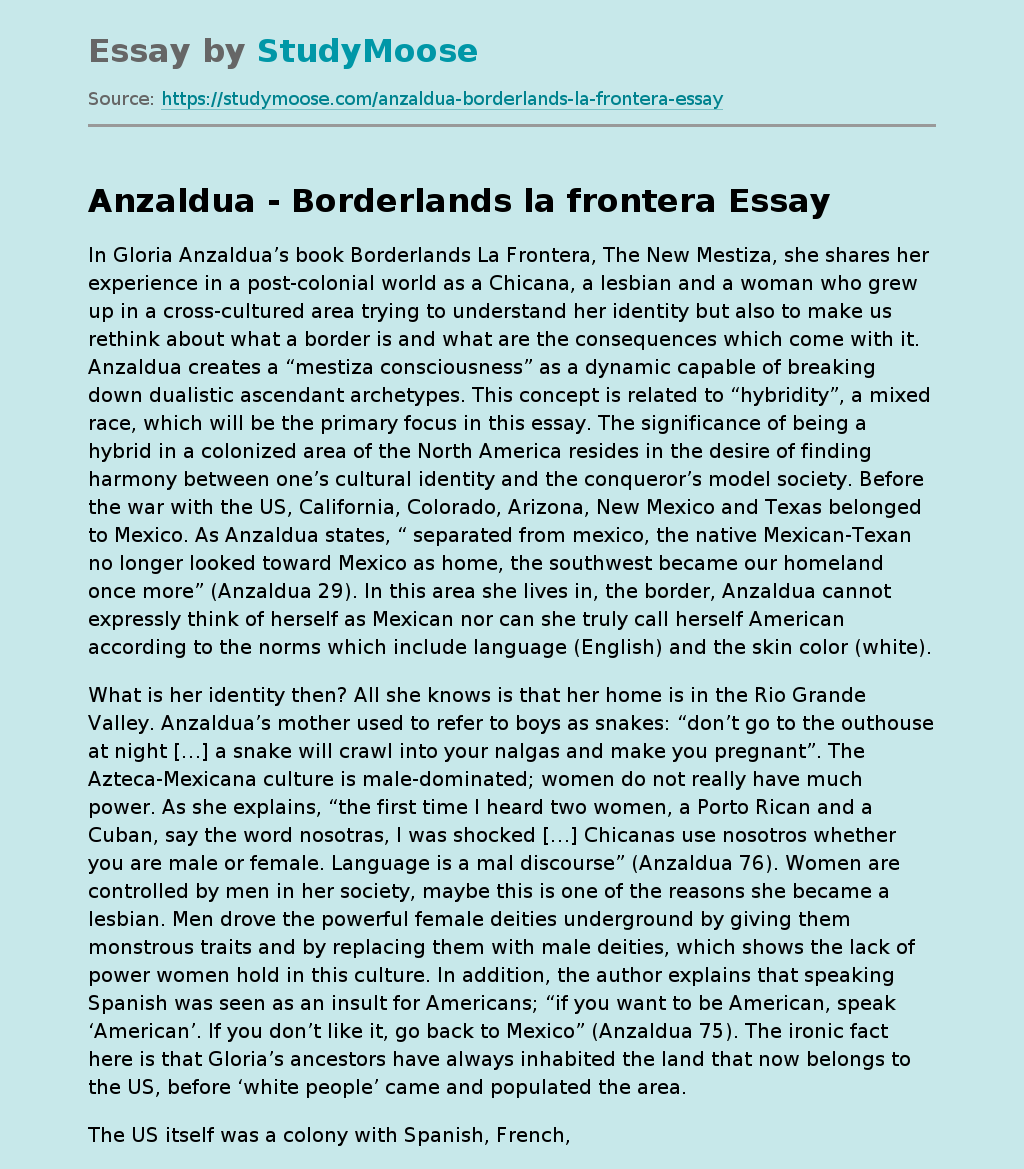