How To Tame A Wild Tongue English Language?

How to Tame a Wild Tongue is a chapter from the book titled Borderlands/La Frontera: The New Mestiza written by the author, Gloria E. Anzaldua. In this chapter the writer talks about her Chicana life in a time full of immigration controversies where Latinos living in the United States struggled to find their national identity and a language to speak freely without shame and fear. Hispanic immigrants or Hispanics born in the United States are mentally tortured by the dominant English language and culture into changing into something that is neither English nor Spanish but a mixture of both.

Don't use plagiarized sources. Get your custom essay on
“ How To Tame A Wild Tongue English Language? ”
Get custom paper
NEW! smart matching with writer

Anzaldúa targets Chicano readers who share her experience in finding a clear identity and American readers as well in order to better understand Chicano life.

In the title Gloria Anzaldúa chose for this chapter in her book, is a title that does not make much sense at first sight but as the reader beings to read the first few paragraphs, he realises that the meaning of the title is how to change a person’s language and way of speaking, such as accent, on an immigrant population.

In this case it would be the author’s own experiences and her maternal language Spanish or to be more precise, Chicano Spanish. As the reader continues reading, he discovers that forcing someone to only speak another language is near to impossible. Anzaldúa showed strong opposition by talking in Spanish with her friends: “My ‘home’ tongues are the languages I speak with my sister and brothers, with my friends.

They are the last five listed, with 6 and 7 being closest to my heart.” (56) She loved speaking Spanish and wanted at least her name to be spoken and heard in Spanish but instead she “remembers being sent to the corner of the classroom “for talking back” to the Anglo teacher when all I was trying to do was tell her how to pronounce my name. “If you want to be American, speak American.’ If you don’t like it, go back to Mexico where you belong.”(53).

Anzaldúa is showing defiance by not wanting to let go of her maternal language. She is proving the futility in changing one’s language and speaking patterns by switching back and forth between Spanish and English. When a teacher would catch her speak Spanish at school she would be punished by that teacher. “I remember being caught speaking Spanish at recess – that was good for three licks on the knuckles with a sharp ruler.” (53). She was accused of talking back to a teacher when all she did was giving an explanation. “I remember being sent to the corner of the classroom for ‘talking back’ to the Anglo teacher when all I was trying to do was tell her how to pronounce my name.” (53). A society such as the one described in Gloria Anzaldúa’s “How to Tame a Wild Tongue” cannot be easily influenced or changed if that society is still living in their territory or close to it. It is in this type of settings that futility manifests the most. On the other hand, once a society or group of individuals are taken away from their territory they will, unknowingly, become heavily influenced if not entirely changed when it comes to their language, culture and history no matter how proud they are.

In her book, the author discusses the cultural and gendered impacts of the language itself. From an early age girls are taught not to talk too much, not to talk back and not to ask questions. In Northern parts of Mexico and Southern most parts of the United States, the female plural in Spanish is excluded from the language, leaving women fall under the masculine plural. Many Latinos and Latinas think people living in these parts of the world are ruining the Spanish language by letting yourself influenced by the English language. You are being criticised for learning or speaking English, the language of the oppressors, thus being treated as a traitor by your own people. “‘Pocho, cultural traitor, you’re speaking the oppressor’s language by speaking English, you’re ruining the Spanish language,’ I have been accused by various Latinos and Latinas. Chicano Spanish is considered by the purist and by most Latinos deficient, a mutilation of Spanish.” (55).

In this chapter, Anzaldúa discusses some examples of how the Spanish language changed and evolved in this part of the world since the first Spanish colonisations began in the region. A combination of different languages, Spanish, English and native American sounds and words were combined to develop into the present day Chicano Spanish. But because of these combinations, the language was viewed as a “bastard” form which is neither Standard Spanish nor Standard English. It was considered by other Hispanics that the language was of poorer quality and thus caused “Chicanas” and Chicanos to feel uncomfortable in expressing themselves. Anzaldúa sees this as something that needs to be changed. The attack on the Chicano’s native language needs to be stopped because “If a person, Chicana or Latina has a low estimation of my native tongue, she also has a low estimation of me.” (58). The author states that language is part of ethnic identity and should be something you can find pride in if women hope to improve their self-estimation. “Ethnic identity is twin skin to linguistic identity – I am my language. Until I can take pride in my language, I cannot take pride in myself.” (59).

Closing to the end of the chapter, the author discusses the language in terms of learning what it is incorporated within oneself. Through Chicano literature, such as books and poetry, through Mexican movies, such as “Nosotros los pobres, the first ‘real’ Mexican movie” (60), and music, Chicanos felt a sense of belonging. It is an expression of their language and thus an expression of them. With these works, the Mexican people get an external reinforcement of their heritage and culture.

Anzaldúa discusses that on the border, the language is getting forgotten. Living in the lands between America and Mexico seems to be a place of confusion, of separation of not knowing to which side you belong. “Nosotros los Chicanos straddle the borderlands. On one side of us, we are constantly exposed to the Spanish of the Mexicans, on the other side we hear the Anglos’ incessant clamouring so that we forget our language.” (62). However, Anzaldúa states that deep down in their hearts, being Mexican is not about where you live or where were you born. It is not in your mind but in your soul. Around the border, conflict and confusion is strong but as Anzaldúa states, her people have been patient and hope that one day the conflict and confusion will end. In the meantime, the Mexican people will survive as they always had.

In coclusion, Gloria E. Anzaldúa’s story of How to Tame a Wild Tongue proved to be a convincing argument because she is the voice of the Chicano people living on both sides of the border. She narrates from her own experience of being a “Chicana” living in the United States where all the pressure of forgetting her language was put on her shoulders for many years. Anzaldúa’s writing style is very poetic and moving and chose to use a lot of imagery to impress her readers and also to let Non-Latin American people learn more about the life of Chicanos which is known so little about to an outsider.

How To Tame A Wild Tongue English Language?. (2019, Aug 19). Retrieved from http://studymoose.com/how-to-tame-a-wild-tongue-english-language-essay 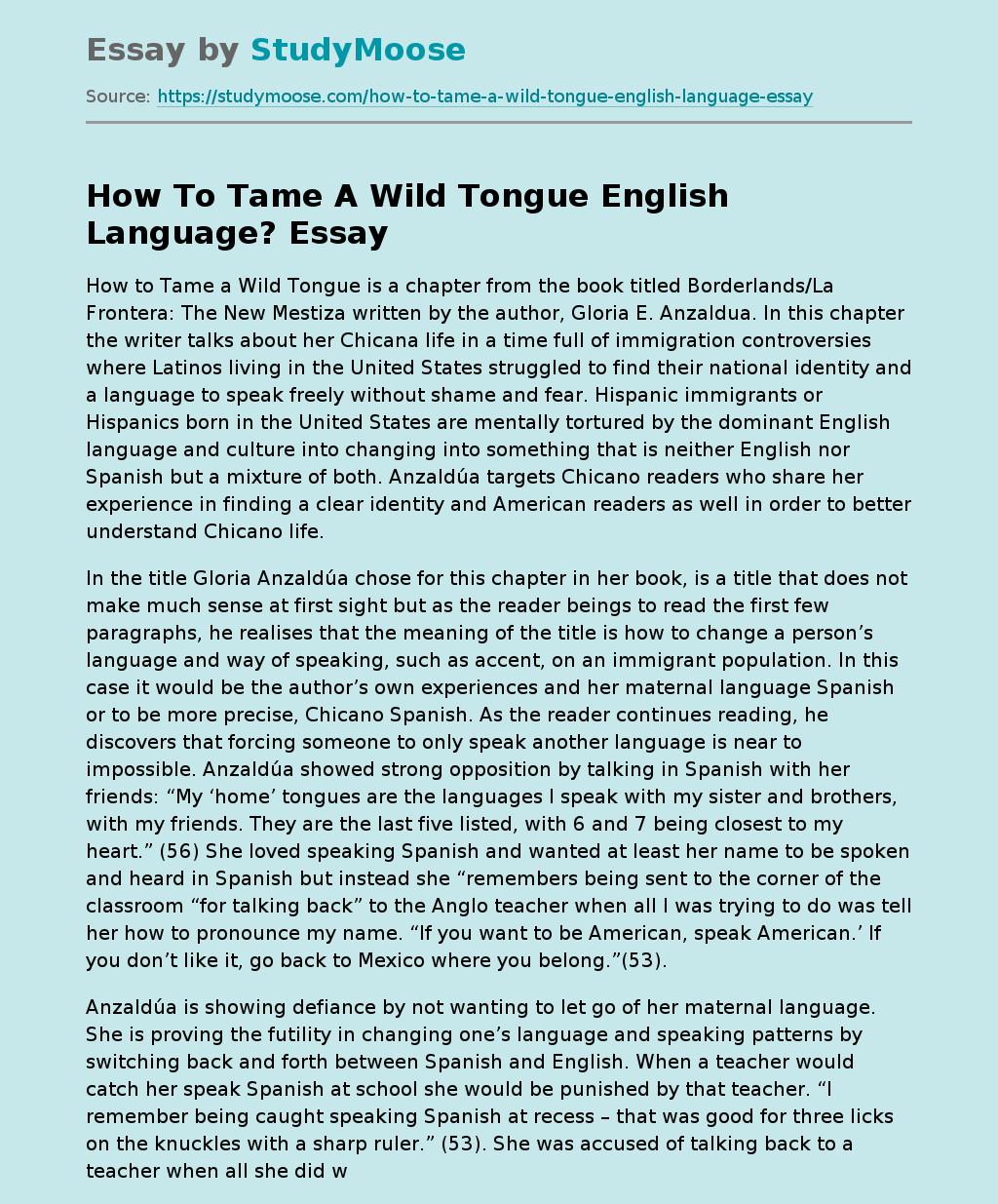