Australian coffee industry continues to mature and surge ahead. Australia has emerged as one of the most discerning and profitable coffee locations in the world, and the amazing monetary figures spent on coffee in Australia each year support global perceptions that Australians are in a position to judge the merits of good coffee. Over the past five years, Australia’s Cafes and Coffee Shops industry has demonstrated itself to be a complex, highly competitive and successful industry.

Don't use plagiarized sources. Get your custom essay on
“ Marketing Analysis of Gloria Jean’s ”
Get custom paper
NEW! smart matching with writer

Industry players have benefited immensely from the nation’s love of quality coffee, which steered the industry through the recent economic downturn, during which it outperformed rival hospitality industries such as restaurants and catering. Specialty coffee shops in Australia are becoming a lucrative sector, as a result of a growing coffee culture and increasing franchising opportunities. Australia’s strong coffee drinking culture has heavily influenced growth in specialty coffee shops, especially among the younger generation Gloria Jean’s in Australian Market

Australian owned and locally operated, the Gloria Jean’s Coffees family now stretches far and wide across the globe, with over 1,000 coffee houses in 39 countries. It is combination of passion, commitment to their communities and dedication to delivering the highest quality coffee to their guests that unites their global team in the same Vision – to be the most loved and respected coffee company in the world. Gloria Jean’s Coffees was founded by Gloria Jean Kvetko in 1979 in Chicago, USA.

These stores were set up to test the concept in the Australian market. In early 1998, Gloria Jean’s Coffees Australia franchised its first store and within six years had opened 185 stores owned and operated by more than 100 franchisees. In 2003, a franchise opened in Darwin; this meant that the brand was now established in every Australian state and territory. Jireh International Pty Ltd formed a North American Affiliate, Praise International North America, Inc. and as of June 14, 2009, the North American rights were sold by Diedrich Coffee to the American Affiliate of the Australian holding company.

To be the most loved and respected coffee company worldwide. Mission of Gloria Jean’s Gloria Jean’s Coffees is committed to building a unified family, consistently serving the highest quality coffee and providing an outstanding and personalized service in a vibrant store atmosphere.

The objective of the report is to identify the corporate and business strategies of Gloria Jean’s, its main competitive strengths and the possible threats that Gloria Jean’s may confront in the future.

Economic Segment: Australia has had one of the most outstanding economies of the world in recent years. As a high-growth, low-inflation, low interest rate economy, it is more vibrant than ever before. There is an efficient government sector, a flexible labor market and a very competitive business sector. Gloria Jean’s has taken this opportunity as consumers in Australia have higher disposable income and are willing to spend more.

Demographic Segment: Gloria Jean’s Coffee is currently targeting small market segment, young adults segment, which comprises people age 18 to 25 years old, compared to Starbucks, 15 to 64 years old. Besides that, Gloria Jean’s mainly focuses on female customers, where half of the sales came from that particular gender.

Political Segment: In Australia there are some rules and regulations that were created for the coffee industry, such as the Fair Trade Certificate and the Rainforest Alliance. Where the Fair Trade certification is an alternative marketing system designed to give the disadvantaged farmers guaranteed prices for their product while The Rainforest alliance focuses on how farms are managed rather than how products are traded. Gloria Jean’s has to follow these rules when they entered into Australian market.

Technological Segment: Technological developments in the coffee industry are very limited. Ordering is one area where technology can be used. Gloria Jean’s buys and roasts its own coffees – controlling the process from the bean to the cup. Therefore it is important for them to know every aspect of the coffee industry to ensure that the products offered by them are top standard quality products and available at all times.

According to Porter, there are five forces that determine industry attractiveness and long-run industry profitability. These five “competitive forces” are— (a) The threat of entry of new entrants, (b) The threat of substitutes, (c) The bargaining power of buyers, (d) The bargaining power of suppliers and (e) The degree of rivalry between existing competitors. The coffee making industry in respect of Porter’s five forces analysis is given below: Threat of new entrants: There are no barriers to entry in coffee shop market. The cost to set up a new coffee business is proportionately lower than those associated with developing new business in other industries. Even the four largest players within this market only have limited market share, totaling not more than 2% of the business. To open a coffee shop usually only requires small amounts of capital for fixtures, fittings and coffee machines. Baristas and café trained staff are readily available, and to train new staff does not take long and is not costly.

So we can say that it is the high threat of new entrants. Bargaining power of buyers: It is very easy for coffee buyers to consume different coffee and other options. In urban locations, there are numerous options for coffee drinkers. Café can be located on practically every corner in all major cities in Australia. Additionally a number of restaurants and diners serve coffee, as do some fast food chains. Individuals can also drink instant coffee or use coffee vending machines. So there is high bargaining power of buyers. Rivalry among competitors: As there are a number of competitors in the market, rivalry can be considered to be fairly high. In many instances, competitors operate next door to one another. It is not uncommon for café strips to surround office complexes and major urban entertainment venues.

In more sub urban environments, cafes are still littered throughout shopping malls, coffee stalls are commonly visible. So we can say that rivalry of competitors is high. Bargaining power of supplier: Suppliers cannot influences cafes as much as is possible in other industries. Due to the number of cafes in the market, working relationships are often not that close. Coffee beans are a highly traded commodity in both developed nations and in the developing world where much of the produce is grown. This leads to an effectively developed and efficient market in the trade of coffee beans. The result is that both originating and whole sale suppliers cannot compete much on price differentiation. They must instead differentiate via the quality of their beans. So we can say that there is weak bargaining power of suppliers.

Threat of substitute: As mentioned previously, customers are able to switch to rival cafes at little or no cost. Quite often to use a substitute café involves walking an additional ten to hundred meters in highly urbanized areas. There are also countless other venues that can be used for social meetings, such as pubs, restaurant and the like. Business meetings can be held at offices or at the venues mentioned above. Coffee is also substituted quite regularly by tea and other caffeine products. It can also be substituted by instant products that are widely available in supermarkets. There are now a number of powdered mock café options available at different stores. Coffee machines are also more affordable and can be used in households. Thus threat of substitute is stronger. As a whole –

Resources are inputs into a firm’s production process, such as capital, equipment, and the skills of individual employees, patents, finance, and talented managers. Resources are either tangible or intangible in nature. With increasing effectiveness, the set of resources available to the firm tends to become larger.

Gloria Jean’s has to emphasize on both its tangible as well as intangible resources. Gloria Jean’s Coffees management team manages to expand their franchises internationally and have full control over their franchisee. It is trying to boost up their franchise revenue and retail sales. There are currently 470 Gloria Jean’s stores located in Australia, and they serve more than seven million coffees each month. Gloria Jean’s Coffees actually provides an ongoing support for all their franchisee. It is one of a dedicated company that strives and has done countless effort in order to make sure that the products they sell have a huge impact on people’s daily lives. They have continuously developed their beverages to look tempting to attract customers. It has a strong brand image for its premium quality and excellent taste. 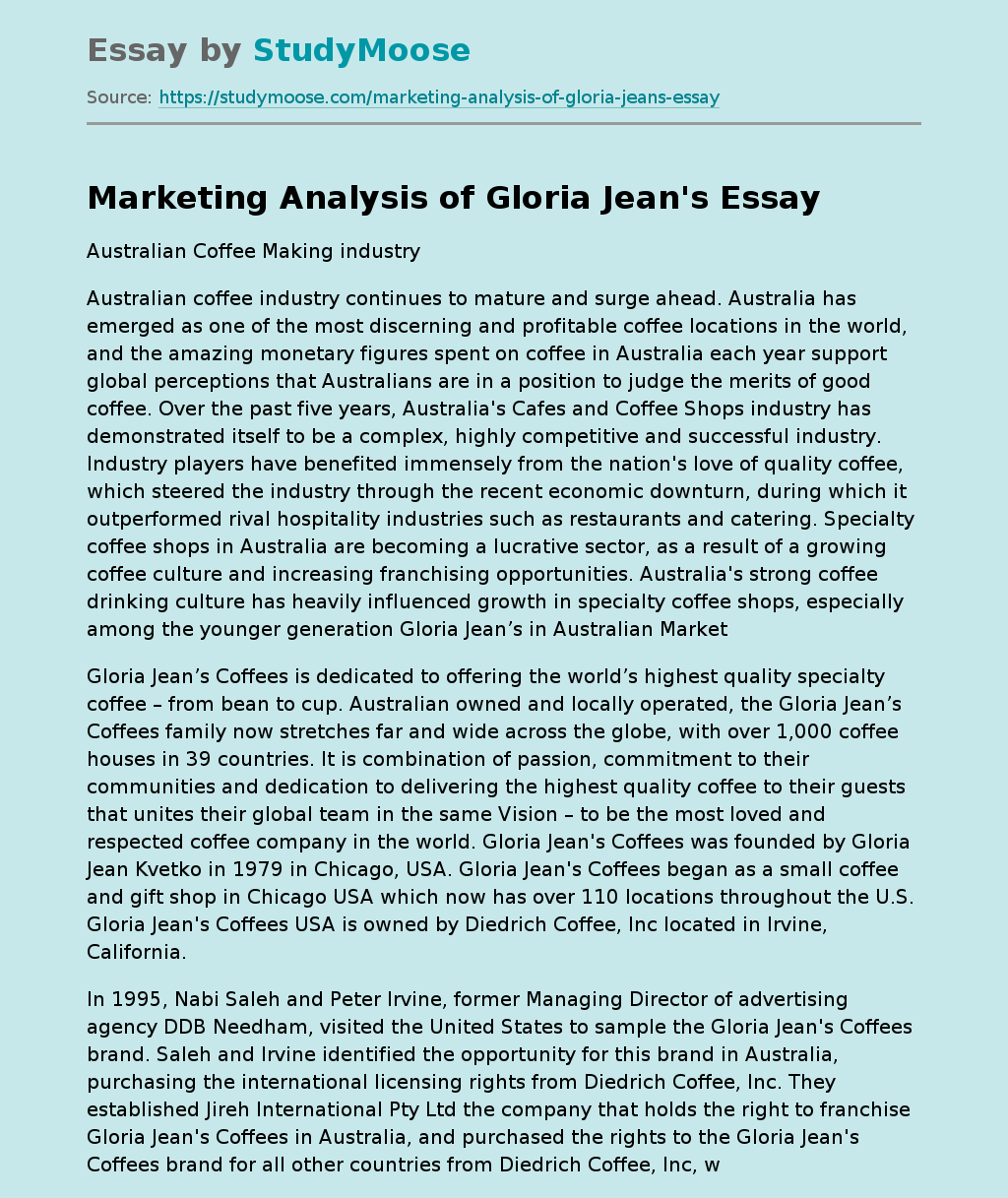