Nowadays, it is not a hard thing to face an advertisement that uses sexual objectification. The mass of modern people is insensitive and careless to how does it work on them. Jean Kilbourne has analyzed how advertisements influence male or female sexuality. She constantly discussed about what she has analyzed and gave reader a large number of examples. In the article, ‘Two Ways a Woman Can Get Hurt’: Advertising and Violence, she argued “Sex in advertising is pornographic because it dehumanizes and objectifies people, especially women, and because it fetishizes products, imbues them with an erotic charge·” She also stated that women are the victim of advertisements and are portrayed as sexual objects rather than human being just for making profit.

Don't use plagiarized sources. Get your custom essay on
“ Rhetorical Analysis about Jean Kilbourne’s Essay ”
Get custom paper
NEW! smart matching with writer

To persuade readers, she used visual materials in her article such as the image of actual advertisement. Her argument was explained to reader based on getting credibility and authority by sharing her analysis and appealing to readers’ emotion.

Given our visually rich media world, normal people are exposed 3000 ads per day.

From TV commercials to social media commercials, our culture is surrounded by advertisements every day and everywhere. In Kilbourne’s article, the author gave the readers many different kinds of image of advertisement which women are sexually objectified and entice people to buy the product. By pointing out a number of inappropriate portraits among the familiar sight of the ads and showing those to the reader, the author was able to inform more directly than using any other materials.

For example, according to Kilbourne’s article, “Sometimes there seems to be no question but that a man should force a woman to have sex. A chilling newspaper ad for a bar in Georgetown features a closeup of a cocktail and the headline, “If your date won’t listen to reason, try a Velvet Hammer.” A vodka ad pictures a wolf hiding in a flock of sheep, a hideous grin on its face. We all know what wolves do to sheep.” Through this passage, the author gave the readers the actual images of ads and described the image so that reader can understand her argument that women have been forced to have a sex by men in the advertisements. She also claimed “These ads are particularly troublesome, given that between one-third and three-quarters of all cases of sexual assault involve alcohol consumption by the perpetrator, the victim, or both. “Make strangers your friends, and your friends a lot stranger,” says one of the ads in a Cuervo campaign that uses colorful cartoon beasts and emphasizes heavy drinking. This ad is especially disturbing when we consider the role of alcohol in date rape, as is another ad in the series that says, “The night began with a bottle of Cuervo and ended with a vow of silence.” The readers can find that a man is considered less responsible than a woman when each of them commits rape if they are both drunk.

In Kilbourne’s article, she used pathos the most by appealing to the emotions of all readers getting involved in her passage. She painted a lot of pictures by describing sex and objectification of women in advertising today. Her analysis also pointed out sexual objectification of young girls. Using a photo of displaying a young teen covered in makeup showing a significant amount of skin. Kilbourne said, “It is hard for girls not to learn self-hatred in an environment in which there is such widespread and open contempt for women and girls.” She indicated that young girls are taught to become a sexual appealing from a young age. She stated, “Although usually numb to these facts on a conscious level, most women live in a state of subliminal terror, a state that, according to Mary Daly, keeps us divided both from each other and from our most passionate, powerful, and creative selves.” Because women are frightened to be victims, they don’t reveal their own features. Those passages can grab most female reader’s attention effectively and make them completely agree with the author.

In Kilbourne’s language, the ethos involve directly in the logos of her writing and she addressed her points by giving numerous examples of different diversity of ads that show exactly what the author is proving to the readers. For instance, she stated, “Turning a human being into a thing, an object, is almost always the first step toward justifying violence to someone we think of as an equal, someone we have empathy with, but it is very easy to abuse a thing. We see this with racism, with homophobia. The person becomes an object and violence is inevitable. This step is already taken with women. The violence, the abuse, is partly the chilling but logical result of the objectification.” Through logical approach to the issue, she pointed out that advertising today encourages violence on people, especially female. Also, by giving the logical explanation, her argument get more credibility from the readers.

Jean Kilbourne’s stance is vivid enough to understand. In advertising today, women and men are both victimized and sexually objectified. I believe that her article quite effectively gets the point across by providing many examples, with a large variety at that, and a great credibility for her reader’s which grabs their attention and gets them looking at the facts which she clearly sets forth for all to see. She wanted immediate action for fixing what advertising aids in flawing, and that is the general image and attitude towards the female gender.

Hi, this is Byung Soo. I am just one of the readers of Jean Kilbourne’s “‘Two Ways a Woman Can Get Hurt’: Advertising and Violence”. And then, I rhetorically analyzed Kilbourne’s article. Strengths of my essay are body and conclusion. In my essay, I have well explained two examples that support her argument. In the conclusion, I stated her argument that she emphasized. On the other hand, the weakness of my analysis is describing in detail. This article is my first essay that is over three pages. I definitely had no idea what I should wrote about and how I described my thought fluently in the writing. So, if I had two more days to work on this analysis, I would more focus on the detail of my thought.

From this assignment, I could learn about dark side of ads that women are sexually objectified and victimized. Frankly, I didn’t know much about gender issues before this assignment. After this analysis, I can see the sexual objectification in ads. That is a big change and This change make me enjoy this assignment. However, it was really challenging to write 1200 words paper work.

Finally, I really appreciate you for reading whole my article. And also, I just wonder if there is anything you can edit in my assignment. 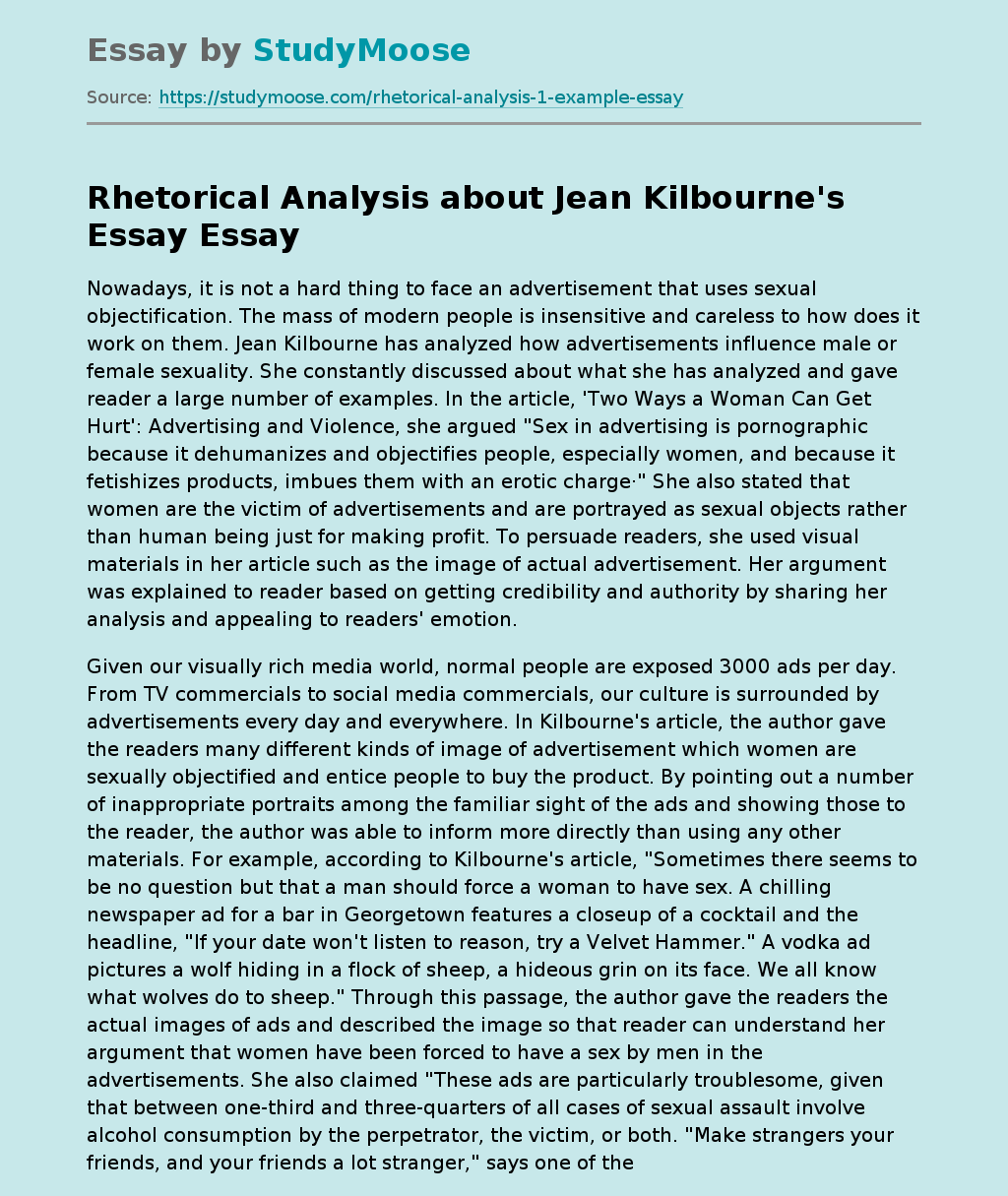