Our language our identity

Identity can be perceived through language; is one of the many ideas that are illustrated throughout Gloria Anzaldua’s “How to Tame a Wild Tongue”. The language you speak is a part of your culture, and your culture is what defines a person the most. Living in a country that is seen to be melting pot of many cultures and heritages, you are bound to encounter someone of another culture but that doesn’t mean we suppress their ability to represent who they are because of their lack of knowledge pertaining to the primary language used in this country.

Don't use plagiarized sources. Get your custom essay on
“ Our language our identity ”
Get custom paper
NEW! smart matching with writer

Immigrants use language to preserve their culture heritage and identity in a foreign land but fear of judgment, suppression and linguistic terrorism affect their ability to fit in and be who they are not only by Americans but also by their own people.

Linguistic terrorism is a term used by Anzaldua herself to express her strong emotions on the suppression of her language by others.

This term is used to describe an action of suppression by a majority group to a minority group because of their values, norms and even language. This occurs because one usually feels dominant and superior over the other. Anzaldua states in her essay that “Our language has been used against us by the dominant culture; we use our language differences against each other.” (136) Living in a diverse cultural country such as the United States, many immigrants feel the need to learn the appropriate English in order to communicate and fit in with society.

Many aren’t able to completely emerge themselves into the American way of doing things without sacrificing a part of themselves through their cultural heritage and identity. Majority of them feel the need to learn English in order to get a job. Even then they are suppressed because they speak with very simple English with heavy accents. Once these immigrants start to feel comfortable with their English, they are often pushed off by their native tongue because of embarrassment and disrespect to their own language.

There are times when groups that have tried so hard to fit in with the Americans are looked down upon by their own culture and society. Anzaldua says, “‘Pocho, cultural traitor, you’re speaking the oppressor’s language by speaking English, you’re ruining the Spanish language,’ I have been accused by various Latinos and Latinas” (133). This portrays how her own people have looked down upon her because the English she speaks now is evident through her Spanish, shaming the language as a whole in their eyes. Such things cause people to feel discouraged and fear being judged by their own culture.

This fear of judgment causes people to have multiple consciences. Sociologists use the term double conscience, a term that coined by W.E.B. Du Bois, to explain such phenomena. It is a way of awareness of who you are and a very different awareness of what other people see you as in contrast to that. The way you act at home would be different in terms of your values, social norms and language. Once you leave your home and enter another society, those values, norms and even language change to those that are commonly believed and used in that newer society.

Anzaldua notes that “My ‘home’ tongues are the languages I speak with my sister and brother, with my friends… last five listed… From school, the media and job situations… standard and working class English. From Mamagrande Locha and from reading…standard Spanish and standard Mexican Spanish” (134). A double conscience or a multiple on can be used to explain Anzaldua’s reason for using different languages in different parts and areas of her daily life. She talks about how she picked up different languages from different places because it was important for her to fit in and communicate with them, changing her conscience along the way .

Gloria Anzaldua is a strong activist when it comes to the connection between language and identity. In her essay “How to Tame a Wild Tongue” she outlines her strong emotional arguments about the ability for one to conform to a society by disposing their own language or identity. Your identity is determined by language, the language you speak is a part of your culture, and your culture is what defines a person because of their beliefs, norms and values. Even though there will always be Linguistic Terrorism and suppression, it is important to remember that your language is what makes you who you are and changing from one language to another is something you must do but that doesn’t mean you let that change your true language or your true identity.

Our language our identity. (2016, May 07). Retrieved from http://studymoose.com/our-language-our-identity-essay 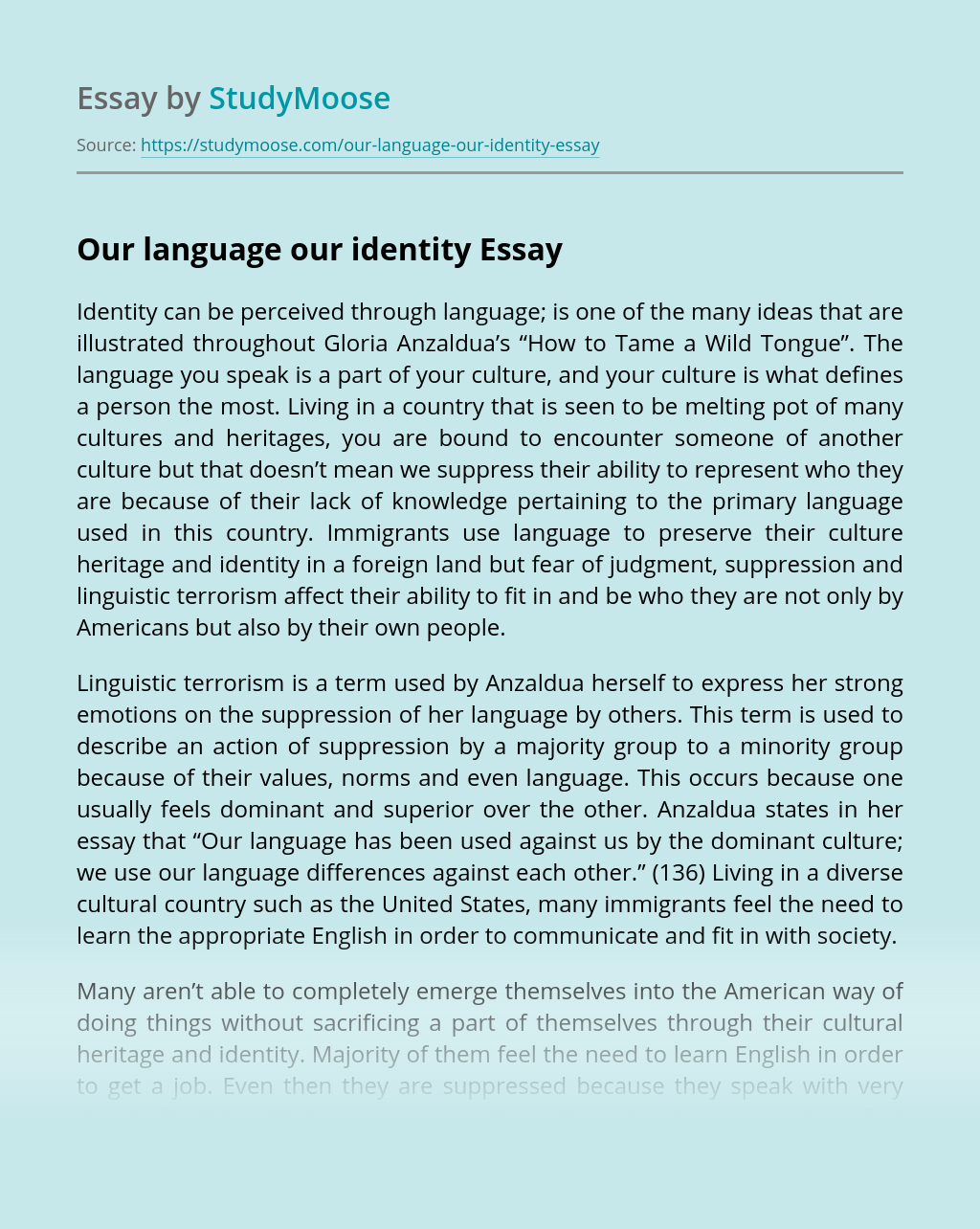